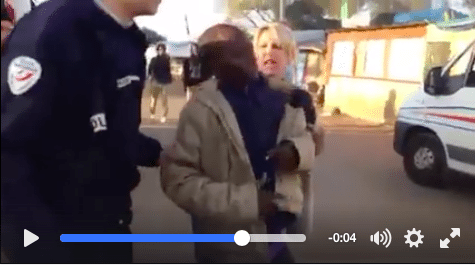 France has now declared the Calais ‘Jungle’ refugee camp empty. But some children are still there, sleeping rough. And they’ve allegedly faced hostility from French authorities: including arrest.

A demolition process has been going on in the Calais refugee camps over the last few days. Officials took two days to register migrants living in the camp to send them to alternative accommodation. And on the second day, demolition started.

Aid groups said the registration process was very chaotic and that information was poor – in spite of a heightened police and media presence. Minors didn’t receive priority status, and children had to sleep in the derelict campsite without shelter, while fires broke out around them.

Organisations on the ground are now reporting that children returned to the registration warehouse as instructed on the morning of 27 October. They queued for several hours. Then, authorities told them to leave the queue, before arresting them without explanation or translators present.

Arbitrary action against migrants in France often evades media scrutiny. In the past, police have taunted camp residents, and clashes have even broken out between them.

Racial profiling at Gare du Nord at 9:46am for the train to Calais. All people with a “foreign” complexion are taken out of the queue and inspected: ticket, identity card, baggage search, small interrogation… just enough time to miss their train. Many people left to go back home.

Mickael filmed and photographed this inspection. He was arrested and taken to the police station at Gare du Nord. There, they took his laptop without his consent, and erased the videos and photos. Of course, there was no written record of the arrest, but Mickael was thrown out of Gare du Nord, supervised by 5 policemen.

While the French government is reporting a successful clearance of the camp, the facts on the ground are still worrying aid organisations. Annie Gavrilescu, from Help Refugees, said:

The chaos has caused children to sleep on the ground in front of the place where they were meant to get safe shelter. It is absolutely despicable.

Today, dozens of unaccompanied children still remain in Calais and have no safe shelter. To prevent further suffering, action needs to come. And soon.

– Write to the Home Secretary and your MP and demand Britain take these children in now.

– Follow Help Refugees and Refugee Info Bus for more information on the situation in Calais.