If these explosive allegations about Trump are true, Clinton's email scandal could pale in comparison - Canary Workers’ Co-op 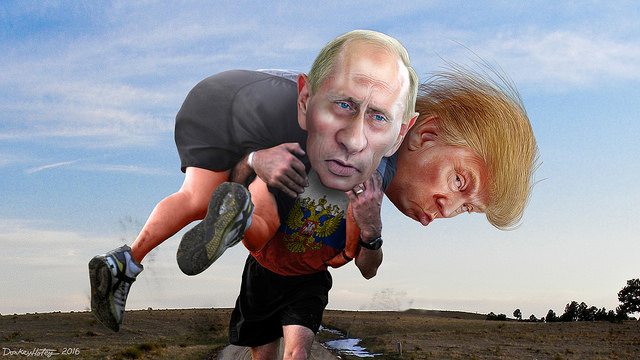 New evidence has emerged in recent days regarding Donald Trump’s alleged position as ‘Russia’s man’ in this year’s US presidential elections. Part of the evidence links the Republican candidate to Russia via his email servers. It also links him to accounts with a Russian bank. And even worse, to allegations that Moscow is blackmailing him.

US elections have always been about the establishment. And this year, we have two figures who respectively represent the Washington and business elites. Together, they’ve spectacularly exposed the moral paucity of the establishment by putting themselves forward for the most scrutinised position in the world.

The most recent allegations against Donald Trump, together with the damaging revelations contained within Hillary Clinton‘s emails, – can only further undermine America’s deeply-flawed political model.

According to the reports quoted below, the FBI is aware of the evidence raised against Trump. But unlike the latest developments with Hillary Clinton’s email scandal, the FBI has seemingly put its investigations into Trump on hold.

On 31 October, Slate reported how a computer scientist codenamed ‘Tea Leaves’ had discovered something interesting happening with Trump’s email server. ‘Tea Leaves’ and other cyber researchers claimed they had discovered “a sustained relationship between a server registered to the Trump Organization and two servers registered to an entity called Alfa Bank”. This is Russia’s largest private commercial bank.

the parties [Trump’s email server and Alfa Bank] were communicating in a secretive fashion.

In other words, there was a type of ‘hotline’. (The technical details relating to Trump’s email servers are here.)

Also on 31 October 2016, a Mother Jones article claimed that:

a former senior intelligence officer for a Western country who specialized in Russian counterintelligence… provided the bureau [FBI] with memos… contending the Russian government has for years tried to co-opt and assist Trump.

The intelligence officer concluded that “there was an established exchange of information between the Trump campaign and the Kremlin of mutual benefit”.

The article refers to intelligence reports which allege that Russian intelligence had “compromised” Trump during his visits to Moscow and could “blackmail him”.

According to The Age, meanwhile, former Trump campaign manager Paul Manafort “was on the payroll of disgraced former Ukrainian president Viktor Yanukovych” (a close ally of Russia); and Trump adviser Carter Page “has energy interests in Russia”.

Embedded in the above reports are denials by the Trump team of any wrongdoing. And The New York Times has reported on how the FBI believes Trump has done nothing untoward. Then again, one current FBI agent has suggested that “The FBI is Trumpland”.

Trump’s change in Ukraine policy (he now supports Russian designs there) and lukewarm support for NATO intervention in Baltic countries if Russia were to invade also suggest that he sympathises with Russia to a significant degree.

The icing on the cake?

The Canary previously published an article detailing the lawsuits issued against Trump which allege sexual misconduct, rape, and even threats of murder. Jill Harth‘s sexual assault lawsuit will now be heard in court on 16 December. If Trump becomes president, he will have to defend himself against these claims before formally taking office. Another woman, meanwhile, was due to give a press conference about her own lawsuit, which is also slowly moving forward. But as a result of threats she allegedly received, she decided to postpone it.

Trump is a self-confessed sexual predator. He is also a misogynist who has referred to women as slobs, dogs and pigs. In addition, he has long proven his racist and authoritarian tendencies, along with his popularity among white supremacists. What will American voters now make of allegations that he’s Russia’s man in the upcoming elections? We’ll have to wait and see.