While Brexit dominates the headlines, experts expose the total failure of Europe's migration policies - The Canary 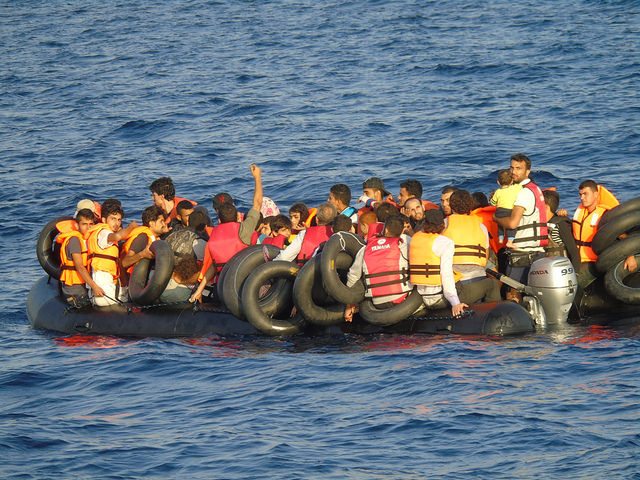 A new report claims that the EU anti-smuggling operation isn’t just not working, but is making the problem even worse. And its release came on the same day as yet another migration tragedy in the Mediterranean Sea.

Yet more deaths in the Mediterranean

On Thursday 3 November, at least 240 migrants reportedly drowned off the coast of Libya. Smugglers had sent two boats carrying around 300 people towards the Italian island of Lampedusa. And despite the presence of the Italian coastguard, only around 30 of the passengers survived.

This makes the total number of deaths in the Mediterranean Sea this year around 4,220, and the number of arrivals to Lampedusa 27,338. Both represent an increase from previous years. This flies in the face of claims that increased border control will save lives and stop people making the journey.

Another measure European navies have used is to destroy the fishing vessels that smugglers often use. But it seems that this has led these criminals to use more flimsy rubber dinghies, which results in longer, more dangerous journeys.

EU policies have ‘boosted’ the crisis

News of the tragedy coincided with the release of an important study by the ‘Unravelling the Mediterranean Migration Crisis’ (MEDMIG) project, also on Thursday 3 November. According to the final report, based on 500 interviews, the focus on people-smuggling rather than conflict as the cause of migration has “boosted not broken” the crisis.

Politicians and policy makers have treated the movement of refugees and migrants as a linear uninterrupted flow of people. This is grossly misleading. The focus on the points of departure and the sea crossings is equally misleading. These simplifications distract from what are often multiple separate movements which converge in Libya and Turkey and help to explain the arrival of refugees and migrants Italy and Greece respectively.

Europe’s response to the so-called migration ‘crisis’ has been driven almost exclusively by a border control agenda. This has significantly reduced the number of refugees and migrants arriving in Greece, for the moment at least, but has done nothing to address the drivers of causes of migration to Europe. Several years into the ‘crisis’, there is still no sign of a coherent long term response.

As such, people-smuggling activities have increased because there are fewer safe and legal methods of fleeing conflict.

This report follows others like it, including that of ‘Death by Rescue‘, which looked at the impact of replacing the Mare Nostrum search and rescue operation with Frontex operations. It concluded that more deaths were caused as a result.

Migration – whether legal, illegal or forced – is a critical political issue in many European countries. It has invoked hard-line policies and knee-jerk reactions. And it has resulted in the loss of many thousands of human lives.

The claim that EU policies have made the problem even worse simply adds salt to the wound. It also reminds citizens throughout the European continent that the solution to the migration crisis has to look at why people migrate rather than just trying to stop or delay the inevitable.

– Read our other articles on migration and the refugee crisis.

– Write to your MP, expressing your concerns about migration policies.