While everyone's distracted by Brexit, Theresa May drops a privatisation bombshell - The Canary 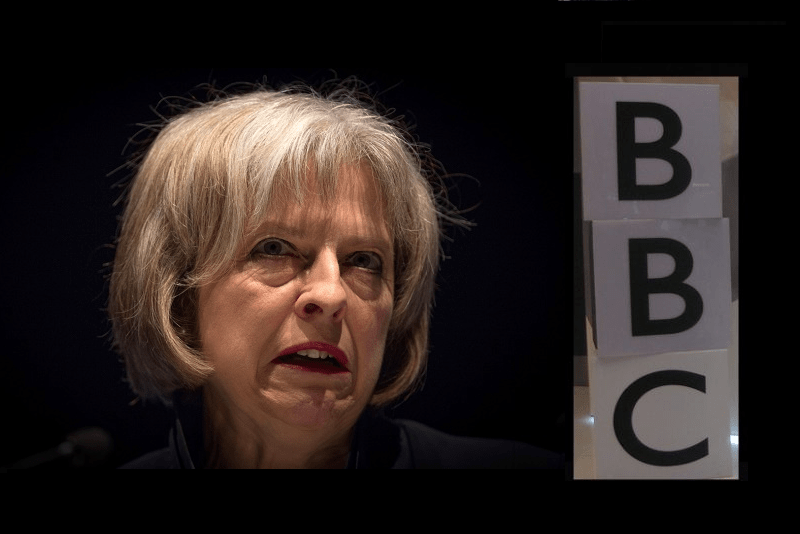 While the British people are distracted by the recent Brexit ruling, Theresa May has dropped a privatisation bombshell on the BBC. As part of its new charter, our public service broadcaster has now agreed to privatise the majority of BBC radio, at 60%.

Where are we at the moment?

At present, around 20% of BBC radio output comes from private providers. It took 20 years since the introduction of external commissioning to reach this point, so many feel a sudden jump to 60% is too swift an expansion. A ballot from the National Union of Journalists (NUJ) surveying BBC radio union members found that 100% thought the plans would damage the service for audiences.

The move comes after a very influential conservative thinktank called for BBC privatisation to combat alleged “left-wing bias”. The Institute of Economic Affairs (IEA) focused on Radio 4 in its report.

Andrew Marr described the IEA as “undoubtedly the most influential think tank in modern British history”. It has strong links to the Conservative Party. The neoliberal group argues that the BBC’s public status masks its left-wing bias, calling for privatisation to remedy this. Its report came just before the government began drawing up the BBC’s new Royal Charter.

Among its criticisms, the IEA accused the BBC of anti-Brexit bias in its Radio 4 coverage from 2004-2015. Just 3% of guest speakers were explicitly pro-Brexit during this time, according to its findings. But considering that people like Tony Benn, Paul Mason and Owen Jones have supported the idea of a Brexit, the suggestion that being pro-Brexit means you are ‘right-wing’ is patently false. Rather, there are left and right dimensions to both Remain and Leave.

Moving away from radio, The New Statesman has conducted analysis for a review commissioned by the BBC Trust (the BBC’s regulatory body) into coverage of the EU referendum. It is completely at odds with the picture painted by IEA.

The main evening bulletins on Channel 5 (5pm), Channel 4 (7pm), the BBC, ITV, and Sky News (10pm) were analysed. The findings showed that, while Remain and Brexit voices were balanced, a massive 71.2% of political sources were from the Conservative Party, compared to just 18.4% from Labour.

Extensive academic studies keep showing the opposite to be true

When it comes to our public service broadcaster, these latest findings chime with multiple earlier investigations into the BBC. Rather than left-wing bias, numerous studies have shown that the BBC is in fact pro-business and pro-conservative:

A report published in July this year found strong media bias against Jeremy Corbyn, claiming the press had turned into an “attack dog” against the opposition leader. According to the report, 56% of the Corbyn-related articles analysed did not give the Labour leader a voice at all.

Not only does the corporation give a disproportionate voice to big business, but it also gives the Conservative Party more airtime than Labour. According to this study, the corporation is not just unbalanced with Corbyn, but is generally biased in favour of the Conservative government. When Gordon Brown was in power in 2007, his coverage exceeded that of David Cameron by a ratio of 2-to-1. And while it’s to be expected that current prime ministers get more airtime than their opponents, Cameron’s coverage in 2012 exceeded Ed Miliband’s by double that ratio (4-to-1).

3) Birkbeck, University of London and Goldsmiths

That’s not all. The Media Reform Coalition at Goldsmiths University and Birkbeck, University of London, analysed TV and online news over the “crucial 10 day period” following the first wave of resignations from Labour’s shadow cabinet in June, up until the release of the Chilcot Report into the Iraq war.

The study analysed 465 online news items from eight outlets, along with 40 broadcasted news bulletins from the BBC and ITV. While our public service broadcaster gave twice the airtime to Corbyn’s critics at prime time, ITV was significantly more balanced.

Considering these academic studies, and that many Conservatives are in senior positions at the BBC, claims that the broadcaster exhibits left-wing bias are quite frankly laughable. And privatisation will only further subvert the BBC to profit rather than public interest.

The BBC is worth fighting for. A properly informed public is the foundation of any meaningful democracy, and a publicly owned media outlet can circumvent the position of powerful citizens as the ‘gatekeepers’ of information. At present, the reality of the BBC is far from this concept. But more transparency, democratic control, and public commissioning would help to turn it into a force for the people. Privatisation would only turn it into a force for wealthy corporations, as profit overrides public interest.

The Canary approached the BBC for comment but had received none at the time of publication.

– Sign the petition calling for an investigation into bias at the BBC.