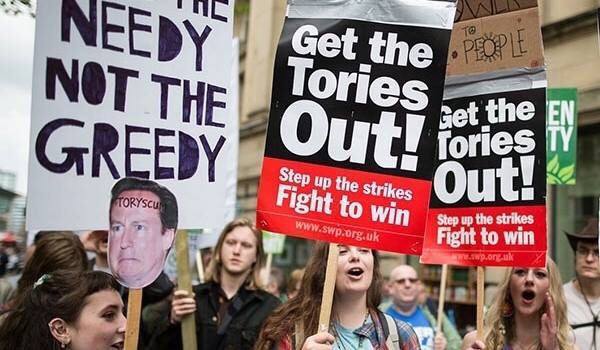 London is bracing itself for one of the year’s biggest days of protest on 5 November. There are numerous events happening across the capital, from Syria protests to the now infamous “Million Mask March”. And the target of most of the protests is the Conservative government.

The day will begin with a Youth March against the Tories starting at 9am outside Downing Street. Since the Conservatives came to power in 2010, cuts to a variety of children’s services have been far-reaching. Child and adolescent mental health services have seen £50m slashed from their budgets. As The Canary previously reported, calls to ChildLine this year have massively increased and services are stretched to the limit. And amidst these cuts, the government is also forcing through a law which is going to affect children’s social care and protection services drastically, possibly opening them up to privatisation. Children’s centres, meanwhile, have had £82m cut from their budgets, and 285 units have closed.

The Youth March call is a simple one:

We want a future. A Tory free future. Protesting non-stop until the Tories leave parliament.

Also starting at 9am is the annual Dying for Heat 24-hour vigil. This happens at Parliament Square, to protest the fact that while energy companies are recording huge profits, people in the UK are dying from fuel poverty. Last winter, 15,000 people died because they couldn’t insulate their homes properly.

From 10am on 5 November, there are four different protests happening at the British Museum on Great Russell Square. These will then join forces for one, large march. The group Show Culture Some Love, supported by the Public and Commercial Services (PCS) union, will be there from 10am, demonstrating about cuts to museum budgets.

Over the past five years museums across the UK have been hit by unprecedented cuts to public funding. The Museums Association (MA) has been monitoring the impact of public funding cuts year-on-year since its first cuts survey in 2011. It has documented over a five-year period how reduced funding levels have affected multiple aspects of museums’ work and services. This survey shows a 24% decrease in staff numbers in 2015, with 18% of respondents saying part of their museum had closed to the public in the past year.

The ‘Zombie Blair Witch Project’ will also be at the British Museum from 10am. It has been protesting the cuts to library staff and services since 2010. As The Canary previously reported, more than 8,000 staff have lost their jobs, over 340 libraries have closed and the number of unpaid staff in libraries has doubled. And the government and councils may have actually been breaking the law with these actions:

From 12pm, Barnet Unison Library Workers will also be joining the other groups. But these workers are actually on strike on 5 November, over the outsourcing of library services. Barnet Council plans to hand four libraries to “Community groups, not-for-profit and voluntary organisations” in April 2017. The council plans to outsource the remaining libraries at a future date. These actions have led to:

The three groups, also supported by the French Social International Ministry will then join up for one march, and Disabled People Against Cuts (DPAC) will also be in attendance. The national libraries, museums and galleries demonstration will be marching from 12.30pm. Full details of the route are available on the organisers Facebook page:

Labour leader Jeremy Corbyn has given his full support to the march. He said in a statement:

The Tories have devastated our public services using austerity policies as justification. I promise that a Labour Government will act to ‘in-source’ our public and local council services and increase access to leisure, arts and sports across the country. We will reverse the damage the Tories have done to our communities in the cities, towns and villages.

Also starting at 10am is an organising forum called Everyone Who Is Here Is From Here. The event at Capstan House, near East India Docks, aims to come up with practical methods to oppose the rise of racism and xenophobia in the wake of the Brexit vote. The event runs until 4.30pm and will consist of workshops, panels and discussions on a range of issues. Tickets are available for free from Eventbrite.

A demonstration called Get The Tories Out Now is being held at Trafalgar Square between 12-6pm. The protest is calling for mass civil disobedience to oppose Theresa May and her party.

Starting at 2pm is a Syria solidarity protest outside the Russian embassy to “stop Russian war crimes in Syria”. The group will be calling on the international community to take action.

And from 4pm, the United Voices of the World (UVW) union is protesting outside John Lewis on Oxford Street, over the company’s treatment of its cleaning staff. The cleaners get paid a mere £7.35 an hour while being excluded from the famous partnership model – so they do not benefit from the store discount, the annual bonus or even the minimum wage of £8.20 per hour. The UVW is calling for John Lewis to stop treating the cleaners like “second-class citizens”.

Finally, from 6pm onwards, there is the annual Million Mask March. Organised by hacktivists Anonymous UK, with grassroots homeless collective Streets Kitchen in attendance, this yearly event sees thousand descend on Trafalgar Square to protest the actions of the state and its agents:

We have seen the abuses and malpractice of this government, and governments before it; the encroaching destruction of many civil liberties we hold dear. We have seen the pushes to make the internet yet another part of the surveillance state; the government’s disregard for migrants, for the poor, the elderly and the disabled. We have seen the capital, profit and greed of the few put before the well-being of the many and we say enough is enough.

Thousands of people will descend upon London on 5 November, and the protests will be wide-ranging, varying in both style and substance. But they have one common goal. Under a Conservative government, the UK does not work for everyone. It favours a rich, select few. And on Saturday, thousands of people will be making their feelings known.

It’s very fitting that it will be Bonfire Night, as there are bound to be metaphorical fireworks aimed at parliament and the political order it represents.

– Check out the whole agenda for 5 November actions.

– Get free advice from Green and Black Cross before the events.

– Donate to the UVW Union.