The world’s richest are meeting up to ‘save the world’. The irony is lost on them [OPINION] - Canary 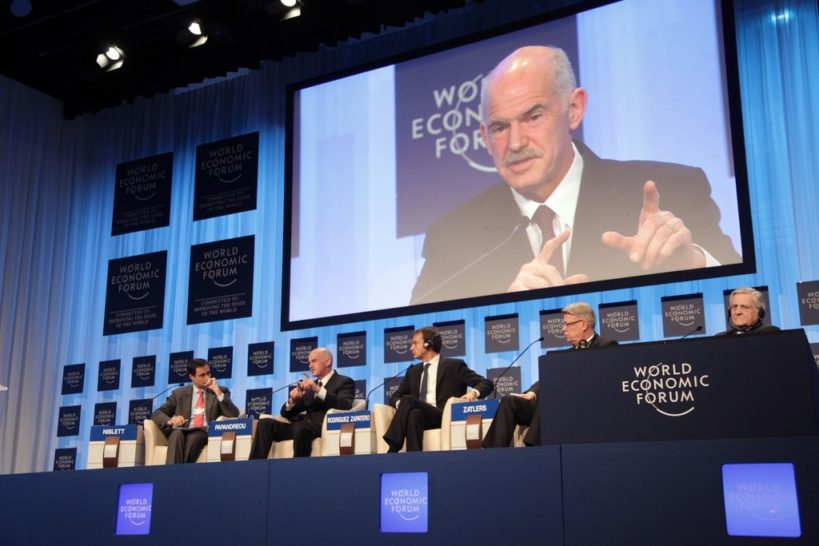 The world’s richest of the rich have begun their annual meeting where they discuss how they’ll solve our problems. But nobody seems to be mentioning the elephant in the room. That they are the leaders of a system that exacerbates those problems.

The World Economic Forum (WEF) takes place where the world’s richest may feel most comfortable: high up a snowy mountain in a notorious tax haven. In Davos, Switzerland, grotesque levels of poverty and inequality will be treated like naturally occurring phenomena, rather than problems largely caused by those attending.

Political and business leaders will offer a bit of tinkering here and there. But their overriding answer will be the same as usual. As the BBC notes, the first Chinese president to ever visit the WEF was “keen to be seen as a member of the club”. Delivering the opening speech this year, Xi Jinping championed that very same answer: ever expanding ‘free trade’.

What has this answer achieved since they got together last year?

In a painful juxtaposition, Oxfam released its inequality statistics the previous day. Eight billionaires now own as much wealth as the bottom poorest half of the world combined. Last year, it was 62 of them.

In 2015, it was 80. That means that, in just two years, wealth has become ten times more concentrated. Global economic deregulation, public spending cuts, and privatisation mean this trend is not new.

And in 2010, 388 people owned half the world’s wealth. Inequality is getting worse.

The wealthy often seek to justify growing inequalities by speaking of increases in global GDP. But the sharp rise in economic disparity in recent years is nowhere near matched by growth. In fact, worldwide growth has plummeted since 2010, after a tepid recovery from the financial crisis. And even if growth increases, it often makes little difference to ordinary people when its benefits are hoovered up by rich.

The failure of the Davos elite to move away from fossil fuels, meanwhile, also means growth is happening at the expense of the planet.

The Davos team wants to eradicate world hunger by 2030. They offer some vague suggestions for this. One step reads:

Agricultural crop diversity will potentially provide communities with the nutrients required for healthy growth and an active lifestyle. To achieve this objective we must educate farmers in the cultivation of these crops, which includes ensuring they have access to the requisite tools and skills.

In practice, though, agribusiness does not trust farmers with access. Monsanto, a leading companies at Davos, patents seeds so that farmers must answer to private corporations to use them. Professor Jack Kloppenburg condemns this:

They are using intellectual property rights, especially patents, to separate farmers from a fundamental means of production. Control of the seed is, in many ways, control over the entire food supply.

Monsanto presides over privatised food supplies, siphoning off profits. Is this elite capable of solving our global problems?

Historical context will also be absent from Davos 2017. After the 1700s, colonialism saw the West plunder and enslave Latin America, Asia and Africa. This global system of subjugation and wealth extraction was a driving force of Western development.

Today, the wealth largely accumulated through colonialism perpetuates such practices. Africa loses an estimated £40bn a year in illegal outflows and price manipulation. And the very same multinationals that wax lyrical in Davos are among the chief beneficiaries.

But neo-colonialism goes beyond this. John Perkins, a former renowned member of the international banking community, told Democracy Now:

Basically what we were trained to do and what our job is to do is to build up the American empire. To bring – to create situations where as many resources as possible flow into this country, to our corporations, and our government, and in fact we’ve been very successful. We’ve built the largest empire in the history of the world. It’s been done over the last 50 years since World War II with very little military might, actually. It’s only in rare instances like Iraq where the military comes in as a last resort.

Leaders that do not accept Western ‘free market’ capitalism, loans from the World Bank and privatised infrastructure are subject to military force. They must sell off their economies to Western corporations or face the “jackals” (CIA-sanctioned armed opposition), as Perkins says. Failing that, the US military goes in.

The US is presently complaining that Russia interfered in its presidential elections. But the US is by far the biggest offender here. Between 1945 and 2000, the US interfered in 81 foreign elections. Failing to comply with Western corporate hegemony is a common reason behind such meddling. For example, the US tried to assassinate recently deceased Cuban leader Fidel Castro over 600 times.

In short, those benefiting the most from neo-colonialism are telling us they’ll solve the world’s problems. Yet their very existence is one of the world’s biggest problems. Some among the richest of the rich are dancing around the world and plundering resources, then telling us that the migration of ordinary people is the problem. The only way to solve such levels of inequality is to break away from their self-serving worldview. It’s down to us.

–Read the latest Oxfam report yourself.