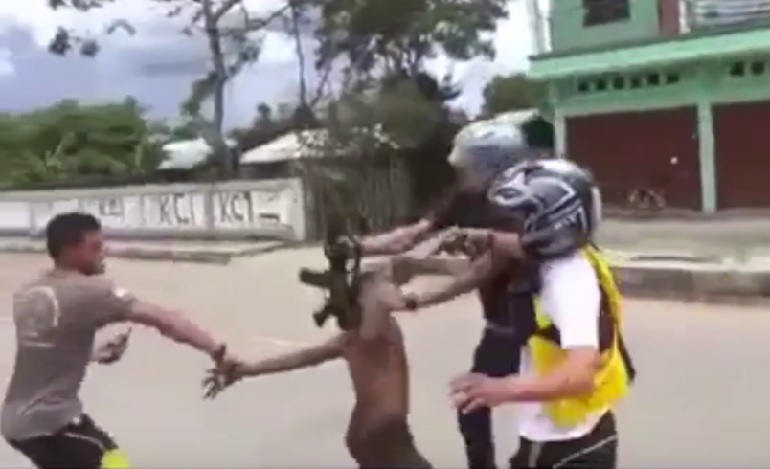 3 May is World Press Freedom Day. And this year, UN events to celebrate the day will take place in Indonesia. A country that has been banning and persecuting journalists for decades.

Indonesia has occupied West Papua since 1963. In the ongoing conflict between the Indonesian army and the Free Papua Movement, over 500,000 civilians have died. Thousands more have reportedly been raped, tortured and imprisoned. And Indonesia has long banned both foreign media outlets and human rights groups from operating in West Papua.

For more on the Indonesian occupation of West Papua, see the following Radio New Zealand video from December 2016.

Media freedom? Indonesia’s having a laugh.

Reporters Without Borders stated in March 2017 that:

Given its repeated refusals to issue press visas and the growing number of journalists on its blacklist, Indonesia falls far short of qualifying as a country that supports freedom of expression and media freedom.

But as The New Internationalist writes:

It seems that Indonesia, a country which ranks 124 out of 180 on the Reporters Without Borders (RSF) 2017 Press Freedom Index, wants to convince the international community that media freedom is in fact its priority. Unfortunately, the Indonesian government’s record does not match its rhetoric, particularly in the eastern Indonesian provinces of Papua and West Papua (often known collectively as West Papua).

In 2016, UK Labour Party leader Jeremy Corbyn (as a founding member of the International Parliamentarians for West Papua) reiterated his support for the West Papuan people’s struggle. He also spoke about the need for “worldwide recognition” of the West Papuan question. This, he said, could eventually give people in West Papua the opportunity to “make a choice about the kind of government they want and the kind of society in which they want to live”.

This year, with World Press Freedom Day as the focus, international and local demonstrations have called on journalists and the international community to push Indonesia to allow foreign journalists into West Papua and to stop its persecution of local journalists there. And West Papua independence leader Benny Wenda made the following call:

World Press Freedom Day 2017 focuses on defending the media “from attacks on their independence”, and on the “media’s role in advancing peaceful, just and inclusive societies”. But the UN would have found it hard to pick a worse place to host the celebration.

– For more information on the West Papuan struggle, visit freewestpapua.org.