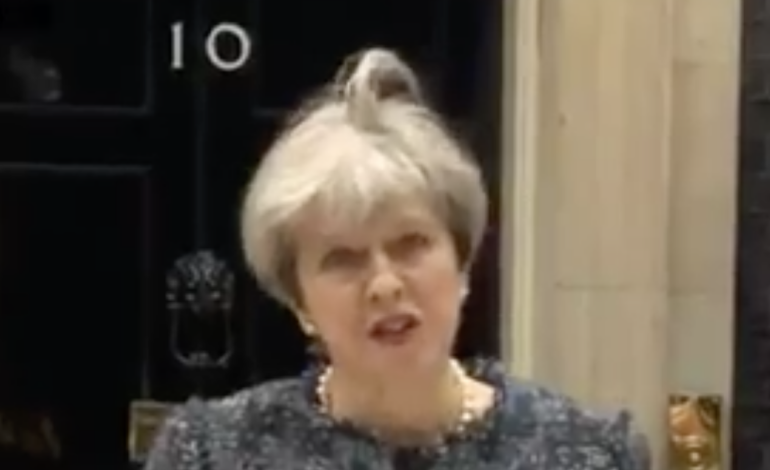 On Wednesday 3 May, Theresa May delivered an attack on Brussels that even The Daily Mail described as an “extraordinary assault”. Speaking outside Downing Street, she accused the EU of deliberately sabotaging the upcoming general election and accused the European press of ‘misrepresentation’.

Stop throwing your toys out the pram, Theresa

It’s been a calamitous few days for May’s relationship with the EU. First, there were reports of a humiliating dinner which May tried to dismiss as “gossip”. Then there’s been the row over the ‘Brexit bill’.

And through all this, May has taken the negotiating stance of bullish soundbites. She’s repeatedly said that “no deal is better than a bad deal”. She then revived her “bloody difficult woman” catchphrase to describe the attitude she would take to negotiations. And throughout, it has been interspersed with the phrase “strong and stable”.

But May’s announcing of the dissolution of parliament went even further. She attempted to frame the whole election around Brexit, saying:

Whoever wins on 8 June will one face one overriding task. To get the best possible deal for this United Kingdom from Brexit.

She made accusations against the press:

Britain’s negotiating position in Europe has been misrepresented in the continental press.

But most incredibly, she claimed that Brussels was trying to influence the election:

Threats against Britain have been issued by European politicians and officials. All of these acts have been deliberately timed to affect the result of the general election.

.@theresa_may says there are some in Brussels who do not want Brexit to succeed or Britain to prosper pic.twitter.com/KMKujVhg9e

“Wobbling and lashing out”

But May’s promised war cry didn’t go down particularly well with everyone. As Thornberry pointed out:

For Theresa May to use the backdrop of Downing Street to‎ make such preposterous, paranoid and xenophobic claims is ill-befitting the office of Prime Minister.

She talks about strong and stable leadership, but at the first sign of difficulty in her talks with Brussels, she is wobbling and lashing out like some hybrid of Richard Nixon and Cersei Lannister.

And she outlined the way that negotiations should be handled:

Instead of alienating our European partners, and insulting them with these ludicrous accusations, she should be working to build effective relationships and make meaningful progress; that is the way to get the best deal for Britain.

You’re not fooling anyone, Theresa

May would like us to believe that Brexit is the only issue in the election campaign. Because if we don’t, we might look at the real reason why many suspect that she called the election – to prevent her losing her slim majority if charges are brought in the Tory election fraud scandal; a scandal that is getting worse by the day.

And May doesn’t particularly want us talking about her disastrous experiences on the election trail so far either.

This speech was a diversion. May’s jingoistic war cry was aimed at rallying voters. It was a sleight of hand to try and make us forget about the real issues. But as one of the only ordinary voters to get close to May this week insisted, Brexit is far from the only issue at play in this election. And May will have a job convincing voters otherwise.