A Conservative MP goes up against an economics professor, and loses… big time [VIDEO] - The Canary 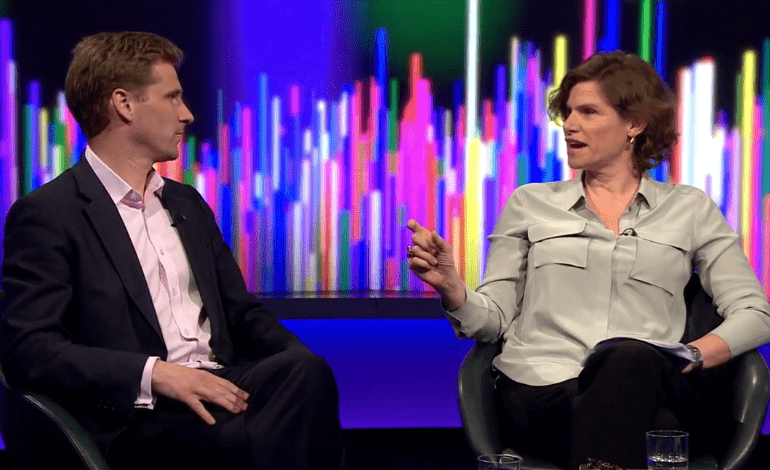 Philp was repeating the Conservative Party line about Labour, saying:

More irresponsible, unfunded promises we hear from Labour, to be paid for by our children…

The Conservative economic policy has reduced how much we’re spending on education… Productivity continues to lag. The little increase in real incomes has gone all to over-60-year-olds… Personal debt to disposable income is back at record levels. How can you call that achievement?

Under the Tories, average household private debt has leapt to a record high of nearly £13,000. And that’s before mortgages.

Mazzucato, who sat on Labour’s Economic Advisory Committee, accused host Evan Davies of “obsessing” over the deficit (the speed the government is borrowing at) targets. And she buried the myth that increased public spending leads to more debt:

What matters is what you’re actually spending on

She also insisted that arbitrary deficit targets are an “irrelevant” measure of how successful an economy is doing. The main point is whether government spending grows the economy and brings long-term returns:

The big elephant in the room… [is] that the source of growth in this country continues to be private debt – consumption-led growth, not investment-led growth

In other words, growth under the Tories has been driven by increasing our private debt rather than through investment. The Conservative narrative is that government finances work the same as a household’s. So people accept that the government must cut spending in order to save money, like a household would. But the economy does not work like that. Starving the economy of public investment actually stifles growth. That’s why debt has been rising under the Conservatives, along with the tax burden.

Straight from the Tory playbook, Chris Philp tried to blame debt from the 2007-8 financial crash on Labour. But Mazzucato set the record straight:

On BBC Newsnight, Mazzucato took down the economic fairy stories that are so pervasive in British politics. But the crux of the issue is, why does Mazzucato represent such a minority opinion in the UK media? Especially when even the conservative International Monetary Fund (IMF) has admitted that austerity economics has brought dreadful results.

What we need so desperately from the media today is more expert commentary and fewer stale catchphrases. But unfortunately, we’ve been getting much more of the latter recently. That needs to change. And the sooner the better.