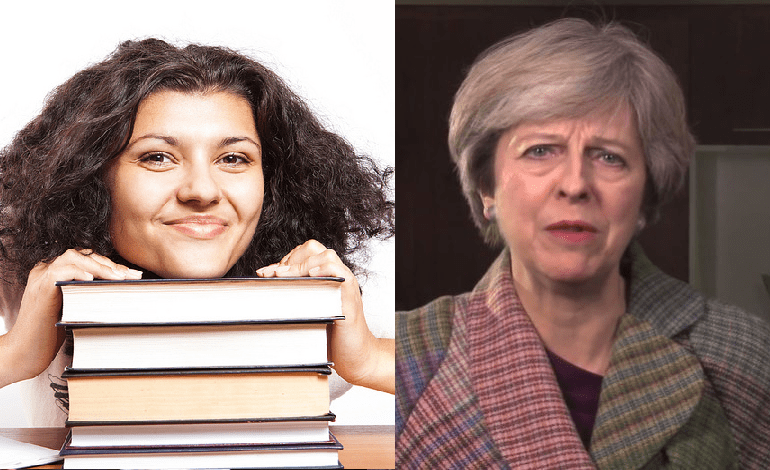 Front-runner Theresa May could be in for one hell of a shock. Students have blown the general election wide open, as 93% say they are registered to vote on 8 June. And the majority of that 93% plan to use their vote either for Labour or to tactically remove the Conservatives from power.

Stepping back from the students, a striking 530,982 under-35s have registered to vote since May called the election. Over half of these people are 18-24. Labour has a solid lead with under-40s, meaning a high turnout from young people could dramatically change the result.

Students’ views on the Labour leadership correspond with this. Among students, Corbyn has a net favourability of +29. Tim Farron scores -10, and May is well behind on -33. Student support for the Conservative Party is at 18%.

The Liberal Democrats have failed to smooth things over after tripling tuition fees with the Conservatives. Ben Marks, Managing Director of YouthSight, said:

Before 2010, the Lib Dems regularly enjoyed a 30% to 40% share among students, which puts their current 12% share, and the negative net popularity ratings for Tim Farron, into perspective. They have a big task ahead of them.

2010 was the year the Lib Dems went into coalition with the Conservatives and broke their flagship pledge not to raise tuition fees. Student support for the Lib Dems hasn’t recovered since, even though six times more students voted Remain than Leave. In other words, the results suggest that students do not see the incoming election as another referendum on Brexit. So Farron’s party will have to do more than just become a single-issue, pro-Remain pressure group.

There are over a million undergraduates entitled to vote at this election and they are concentrated in certain constituencies. They are an important group of voters, but only if they choose to wield their power.

This time, students have registered to vote in large numbers

The Conservatives will be counting on this happening again. May doesn’t need young people to vote for her. She just needs the youth vote to stay home.

So let’s all vote, whatever our age. We could deliver one hell of a shock.