A lawyer stands up to Theresa May, challenging one of her key election pledges [VIDEO] - Canary Workers’ Co-op 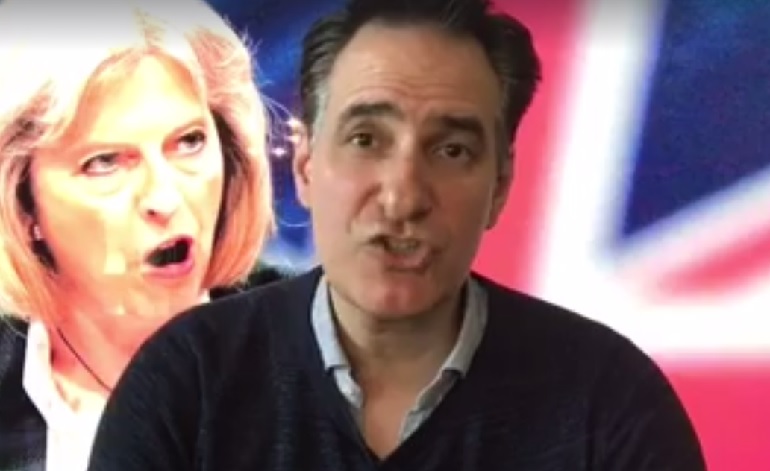 One of Theresa May’s main pledges in the 2017 general election is that her party will ‘defend’ Britain – something she claims her opponent Jeremy Corbyn will not do. But it’s not a claim that stands up to much scrutiny. And one lawyer in particular has taken May to task on the issue.

May has “constantly got it wrong”

Peter Stefanovic is a lawyer and prominent campaigner. His Facebook page has nearly 60,000 likes, and he is renowned for his no-nonsense, straight-talking political vlogging. And this week, after Theresa May’s poor performance in a BBC interview, he released a video message challenging May on her ‘defence’ stance.

He stresses in particular that the Prime Minister is a person who, on foreign policy, has “constantly got it wrong and then constantly refused to admit it”. And he slams her “mindless rhetoric” – referring to her robotic repetition of stale slogans.

“You just can’t make this stuff up”

Reminding Britain of Theresa May’s support for disastrous military interventions abroad in the past (like the invasion of Iraq) and of Jeremy Corbyn’s opposition to such action, Stefanovic insists that:

When it comes to foreign military intervention, we now have a chance to elect a prime minister who, over 30 years in parliament, has consistently – consistently – shown he makes the right call. A man who’s consistently stood on the right side of history when so many others got it so badly wrong.

As if the threat of nuclear war growing day by day wasn’t bad enough right now, we’ve got Theresa May openly saying she’d order a nuclear strike that would kill 100,000 people. And her trigger-happy Defence Secretary Michael Fallon’s saying on national telly the country would use nuclear weapons as a first strike.

You just can’t make this stuff up. ‘Strong and stable leadership’ is not about bombing the shit out of the poorest countries on Earth… You cannot achieve peace in this world by constantly threatening war on people…

The wrong side of history

On 30 April, the BBC‘s Andrew Marr challenged Theresa May on the difference between her and Jeremy Corbyn’s voting positions on the 2003 invasion of Iraq. He said:

Whatever you think of Jeremy Corbyn, he was on the right side – looking at history – and you were on the wrong side.

And as Stefanovic points out, this is one major issue that destroys May’s claim to be stronger than Corbyn on foreign policy.

Before the 2003 invasion, Corbyn warned that such action would:

set off a spiral of conflict, of hate, of misery, of desperation that will fuel the wars, the conflict, the terrorism, the depression and the misery of future generations.

Those MPs voting in favour of the conflict – including Theresa May – ignored that analysis. But it was unfortunately proven right. The rise of Daesh (Isis/Isil) was a direct result of the invasion. The extremist group’s forerunners grew support in opposition against the invasion and the occupation that followed. The conflict also led to the death of around 1 million Iraqis. And it destabilised the region – creating the roots of the current refugee crisis.

Those who don’t learn from history are doomed to repeat it. And the Conservative government’s apparently unflinching support for an escalation in global conflicts suggests that May has not learned the lesson. So under May, there’s little chance of ending the cycle of perpetual war, and the death and destruction that ensue. Corbyn, on the other hand, has consistently shown foresight on many foreign policy issues.

That’s why the narrative that May is a ‘safe pair of hands’ crumbles with the slightest analysis.

– Register to vote in the 8 June general election. If you don’t have a national insurance number, call 0300 200 3500 and you should receive one in ten days.