In her 'megaphone' speech against the EU, Theresa May admits Brexit disaster looms - The Canary 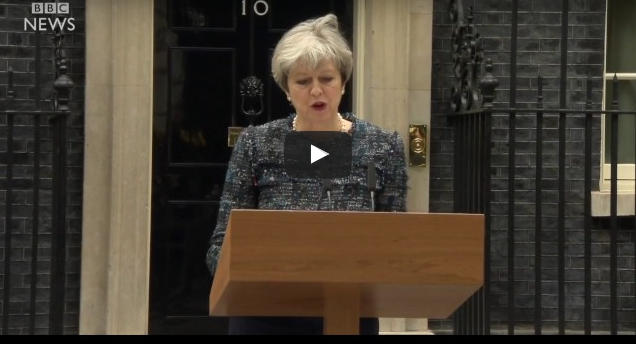 Immediately after visiting Buckingham Palace to formally seek the dissolution of parliament, Theresa May took to a podium outside of 10 Downing Street. She appeared angry, and launched straight into a speech. But in doing so, she let slip how Brexit is likely to be a disaster. And that slip could cost her the election.

In her speech, May accused the EU of interfering in Britain’s election. But it was May who triggered Article 50, setting Brexit in motion [pdf]. And the EU has its own Brexit timetable that can’t be halted simply because May decided to call a general election. That the two events clash is entirely down to May.

But May clearly prefers what Labour leader Jeremy Corbyn describes as “megaphone” diplomacy. And according to Baroness Helena Kennedy, the Prime Minister doesn’t appear to have the slightest understanding of the legal complexities involved in creating a new relationship with the EU.

The EU’s chief Brexit negotiator Michel Barnier issued a statement prior to May’s Downing Street speech. He clarified how the Brexit ‘bill’ Britain will be required to pay is not a bill, but a settling of Britain’s EU account.

No settlement figure was quoted. But earlier, The Financial Times claimed [paywall] it could be as high as €100bn. Although it’s unclear if that will include rebates. Britain’s Brexit minister David Davis stated, however, that “in the walkaway circumstance, there is nothing to be paid”; before later contradicting himself and saying that Britain would only pay what was legally due. Which is no different from Barnier’s claim.

May went on to warn that Brexit failure will see massive economic consequences for the British people:

And it [Brexit] is central to your own security and prosperity. Because… if we do not get this right, the consequences will be serious. And they will be felt by ordinary, working people across the country…. your economic security and prosperity will be put at risk and the opportunities you seek for your families will simply not happen… we risk the secure and well-paid jobs we want for our children and our children’s children too.

In other words, if the Brexit negotiations were to see no deal, which would appear more likely under May’s stewardship, then the British people should prepare themselves for a Brexit train crash. And for the inevitable consequences. But then May would probably blame those consequences on the EU, anyway.

Nonetheless, the general feeling in May’s speech was that disaster looms.

The truth is out

Her speech was all about trying to get sympathy from the electorate. Instead, what came across were not the words of a ‘strong and stable’ leader, but a cry of desperation from someone who is clearly out of her depth. A case of ‘infamy, infamy: they all have it in for me’ (presumably referring to the leak of her meeting with Jean-Claude Juncker). But it’s the old trick of a bully: when cornered (in this case by her own actions and indiscretions), to redefine oneself as the victim.

For the Tories, Brexit has nothing to do with how the British people can ‘take back‘ their country. Instead, it has become a means by which the Conservatives reclaim Britain from the EU’s social justice agenda. In other words, a Britain with fewer workers rights and more in line with right-wing capitalist ideology.

Lies and politics go hand-in-hand. Though the really big lies could see an electorate rebel against the established order, and seek a very different sort of politics.

But will British voters see through this ruse? And will working people realise the full and dreadful economic consequences of a far-right Tory Brexit before it’s too late?