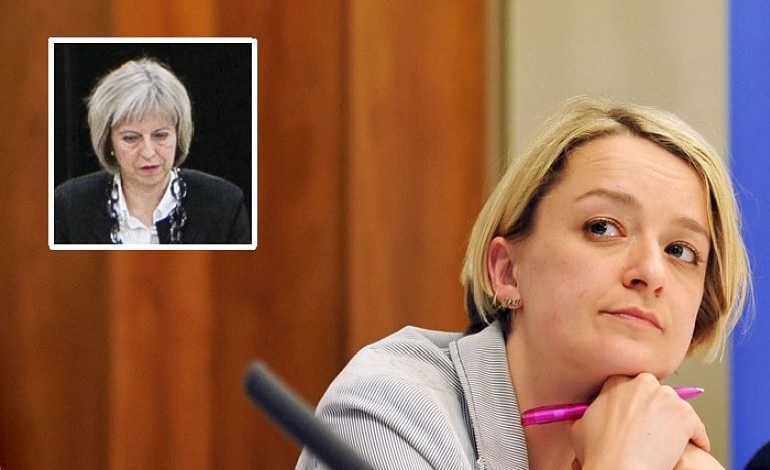 The BBC‘s Laura Kuenssberg has just called Theresa May a liar. In the most delicate way possible, of course. And perhaps even accidentally. But it shows that the Tories’ cynical pre-election posturing is now so extreme that even the BBC‘s Political Editor isn’t able to spin it in their favour.

The Prime Minister accused the EU of interfering with the UK’s general election on 3 May. Sources had leaked damning accounts of a dinner May attended with European Commission President Jean-Claude Juncker a couple of days before. The details of that meeting were humiliating for the Prime Minister.

So May accused the “bureaucrats of Brussels” of meddling in the coming election. She also said that such interference showed how “tough” Brexit talks are going to be. And May urged people to vote Conservative, promising a stern position from her party in those negotiations.

How are you not dizzy, May?

But even the Tories’ usual cheerleader, Kuenssberg, had to point out that there was nothing stern about May’s warning. As it was in itself a U-turn from that very morning. The BBC‘s political editor asserted that May’s Brexit Secretary and Chancellor had claimed the government won’t engage with “megaphone diplomacy” earlier in the day. Yet by mid-afternoon, May was doing exactly that. Directly outside 10 Downing Street no less. As Kuenssberg wrote:

She just used one of the most powerful microphones in the country for blunt diplomacy indeed.

And although Kuenssberg claimed May’s statement was “quite an accusation to make”, she added a caveat. One that potentially cut to the core of May’s motivation. Kuenssberg wrote:

And do not, for one second, be surprised if come 9 June, IF Theresa May is back in power, her language starts to sound rather more conciliatory.

The Lady’s only for turning

By now, the Conservative Party is infamous for its U-turns. And many would argue that a more “conciliatory” approach to the Brexit negotiations is good for the UK. But Kuenssberg’s knowing comment – from the highest levels of the establishment media – reveals a despicable truth about May’s pledge to the UK public. That it’s a lie. That she’s just saying it to woo voters. And therefore, it could soon end up thrown on top of the ever increasing pile of broken Tory promises.

British voters, however, are tiring of such political games. And that’s perhaps why Kuenssberg put a very big “IF” in that revelatory sentence. Because if May continues down this campaign path of soundbites and spin, she could meet with a nasty surprise at the end of it.

And that’s a fact that even the BBC now admits. Extraordinary.