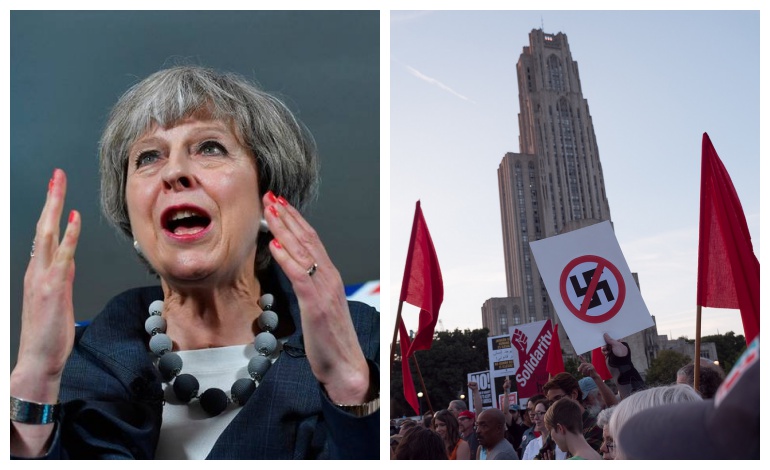 US President Donald Trump has compared the violent actions of neo-Nazis, white supremacists, and KKK members to those of the people who came to challenge them. And while Trump’s latest speech has given the far right a huge boost, Theresa May has failed to call him out; nor has she commented on his visit to the UK. In fact, even her own cabinet ministers spoke out on the matter before she did.

An “unequivocal boost” for the far right

As The Canary previously reported, violent events in Charlottesville (Virginia) surrounding a far-right march on 12 August 2017 left one person dead and many injured. Trump’s initial response to the violence was widely criticised, as he blamed “many sides” for the violence. Two days later, a scripted speech appeared more measured. But on 15 August, he went off script after a press conference and again blamed “both sides”:

In the same speech, he claimed there were some “very fine” people among the white supremacists and Nazis.

This latest response has drawn widespread criticism. The New York Times, for example, said that his speech has given white supremacists an “unequivocal boost” and that:

President Trump buoyed the white nationalist movement on Tuesday as no president has done in generations — equating activists protesting racism with the neo-Nazis and white supremacists who rampaged in Charlottesville, Va., over the weekend.

Did Theresa May challenge Trump?

On Monday 14 August, Theresa May was criticised for taking so long to challenge Trump. In fact, she didn’t say anything.  A spokesperson said on her behalf that it was “a matter for him”.

However, in light of his most recent comments, she has finally given a statement and said:

I see no equivalence between those who propound fascist views and those who oppose them. I think it is important for all those in positions of responsibility to condemn far-right views wherever we hear them.

But there is widespread concern that this statement was not given sooner, that she didn’t criticise Trump directly, and that it does not go far enough. For chilling footage has been widely shared of the US far right marching with torches as they chant “Jews will not replace us”, and “Whose streets? Our streets!”

Tory MPs, however, spoke out against Trump long before Theresa May. The first cabinet member to do so was Sajid Javid, who tweeted:

Neo-Nazis: bad
Anti-Nazis: good
I learned that as a child.
It was pretty obvious.

When the likes of David Duke praise you, you are on the wrong side. There are no 'fine' Nazis. We must all stand firm against far right. https://t.co/usLCb9eCbj

Now is not the time for hand-holding. Theresa May must stop being cowardly and show zero tolerance for bigotry. Her silence makes her complicit.

What happened was a group of the far right turned up in Charlottesville – KKK supporters, Nazis, white supremacists – in order to cause trouble. A group of people objected to their presence and there is no equivalence between both sides. I can find nothing decent about anything the KKK or Nazis say or have ever said.

Surely for goodness sake have we not learnt the lessons of what happened in the earlier part of the 20th century, surely we have learned the lessons of the brave people that marched from Selma to Montgomery, there can be no return to those days.

There are now more calls for May to cancel Trump’s state visit to the UK. And we need to ask why she has refused to do so.

It’s not difficult to rip Trump’s words apart. And it’s difficult to see why Theresa May hasn’t done so more clearly.

As US comedian Stephen Colbert said:

the opposite of alt-right isn’t the alt-left, it’s the “not-Nazis.”

Over in the UK, there is also a rising concern – as The Canary has reported – about racist and far-right commentary. So Trump’s shocking comments cannot go unchallenged. Equally, we have to question a prime minister who appears unprepared to take a stronger stand against him. Indeed, as The Independent said, if May doesn’t challenge Trump more directly and effectively, she should “get the hell out of office”.