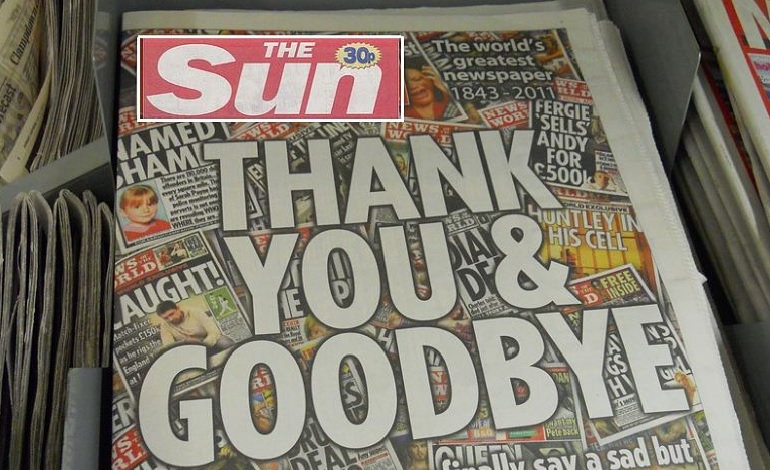 The Sun newspaper faces another potential ban, this time in Wales this autumn. And one senior Tory gave a jaw-dropping response to the prospect of Murdoch’s rag being excised from Flintshire County Council.

Labour’s Deputy Leader of the council, Bernie Attridge, has put forward a motion to ban The Sun in solidarity with the Hillsborough victims. Following 96 people losing their lives in the crush at an FA Cup semi-final in 1989, the tabloid ran a front-page article that blamed football fans for the incident.

Some councils and football club fan groups have already taken action to remove the paper from local shops in response to the slur. Now Attridge and councillor Kevin Hughes want it removed from Flintshire County Council premises too.

The motion proposes that the council not allow the paper on its premises. And it calls for the authority to ban Sun journalists from its estate. It also recommends that the council refrain from advertising in the tabloid.

Attridge has used a draft motion submitted by the Total Eclipse of the S*n campaign. The council is currently reviewing its legality. If approved, the council will place the motion on its agenda on 27 September.

But the prospect of The Sun disappearing from the council’s offices has much displeased Wales’ Shadow Local Government Secretary Janet Finch-Saunders. Responding to the motion, Finch-Saunders said:

This is a childish and typically spiteful move from a Labour Party which no longer cares for the fundamental principle of free speech, and which no longer backs a free press.

It’s an attempt at full-on state censorship of the media, and another bizarre turn from a Left Wing which no longer has the courage to debate its opponents.

This is how dictatorships start, and Jeremy Corbyn should know a thing or two about them.

Finch-Saunders also argued the ban would be illegal. Because the Public Bodies (Admission to Meetings) Act 1960 [pdf] legislates for press attendance at certain public meetings.

Despite Finch-Saunders’ apparent dedication to free speech and a free press, however, she doesn’t mention her own party’s failings in this regard. Nor does she appear to feel any embarrassment accusing Labour of cowardice in debates when Theresa May refused to show up to a television debate during the general election campaign.

But on the issue of freedom, for the press and the public, the Tory government’s record is abysmal. The UK, in fact, dropped two further places on the World Press Freedom Index to number 40 in 2017. In 2009, the year before the Tories came to power, it stood at number 21.

There are a number of reasons for this decline. The government’s introduction of the “most extreme surveillance law ever passed in a democracy”, the Investigatory Powers Act, is one. And the Law Commission’s proposals for a new Espionage Act that could criminalise good journalism is another. Meanwhile, the government is breaking records in limiting the transparency it provides to the public.

All of these factors combined make for a very ‘unfree’ country indeed. So the Tories can stamp their feet all they like over a boycott of Murdoch’s vile, discriminatory rag. But we’re currently in this sorry, dangerous position because of their choices. So until the Tory government makes better ones, no one should believe it gives a damn about free speech.