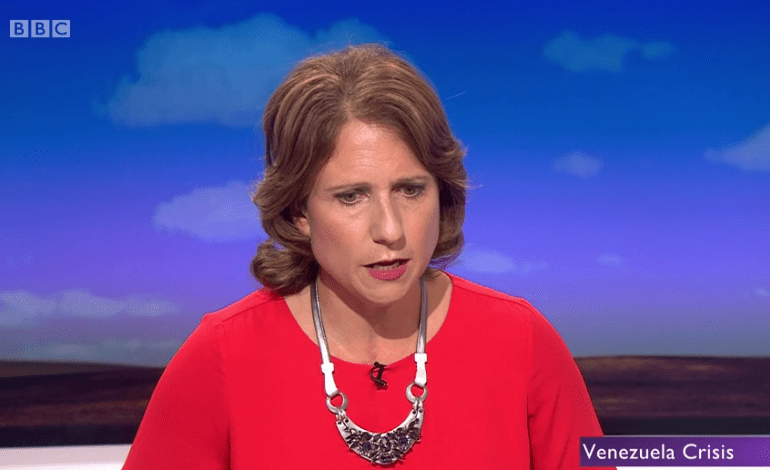 BBC host Jo Coburn has appeared to exploit Charlottesville victim Heather Heyer to smear Labour Party leader Jeremy Corbyn. On Daily Politics, Coburn seemed to co-opt anger at Donald Trump over the death of Heyer and direct it towards Corbyn. Speaking about his response to the crisis in Venezuela, Coburn said [12:33]:

She suggested that Corbyn’s statement on the crisis in Venezuela was as bad as Trump’s speech following a protest in Charlottesville (Virginia). But the comparison simply doesn’t add up.

Coburn appears to be likening Corbyn to a Nazi sympathiser. On 12 August, the notorious far-right march led to violent clashes leaving anti-fascist counter-protester Heyer dead and many injured. Responding to the violence, the US President essentially equated KKK members, white supremacists and neo-Nazis with the people who came to challenge their beliefs:

In the same speech, Trump insisted that there were “very fine” people within the Nazi ranks. The US President’s refusal to unequivocally condemn far-right domestic terrorism sparked worldwide anger.

BBC tries to direct that anger to Corbyn

Now, the BBC‘s Coburn seems to be trying to direct that outrage at the Labour leader. Coburn claimed that Corbyn is behaving like Trump when the US President appeased Nazis and a domestic terrorist. But the crisis in Venezuela is incomparably different to what happened in Charlottesville. And the BBC surely knows that.

In Venezuela, there is a political struggle underway between the anti-government, right-wing, Washington-linked opposition leaders and the democratically elected left-wing government. Opposition-led protests have clashed with pro-government forces, resulting in over a hundred fatalities.

It is still unclear who is responsible for the majority of the fatalities in Venezuela, although both government and opposition forces have acted violently.

But what is clear is that Venezuelan opposition leaders have a history of violence and dubious motives. Prominent opposition leader Leopoldo López has a history of inciting violent protests. During the US-backed 2002 coup attempt against Venezuela’s democracy, US-educated López illegally arrested (critics say “kidnapped”) a cabinet minister. Recently, López also called for the military to “rebel” against Venezuelan President Nicolás Maduro.

Meanwhile, right-wing opposition candidate Lilian Tintori is under investigation after US$60,000 was found in a vehicle she owned.

Unlike the BBC, Corbyn’s statement acknowledges a complex situation. There has been violence from the opposition, but also the state. The UN has criticised the Venezuelan government for using excessive force against protestors. Yet the BBC paints the opposition as the ‘good guys’ – the absolute victims of a violent left-wing government.

Hound Corbyn, let May off the hook

The BBC has hounded Corbyn over Venezuela on a number of occasions since the crisis unfolded. And on Daily Politics, Coburn’s line of questioning was true to form [12:31]:

Has the party gone far enough in condemning the situation in Venezuela?

She then followed up with:

Has Jeremy Corbyn led from the front in condemning the situation in Venezuela?

While the BBC continues to make such demands from Corbyn, the actual Prime Minister of the UK is apparently free to do whatever. For instance, Conservative Party ally Saudi Arabia has been bombing Yemen since March 2015. The dictatorship has been accused of war crimes for targeting vital infrastructure and densely populated civilian areas. Nonetheless, the Tory government approved £3.3bn pounds worth of arms to the Saudi kingdom in just the first year of its destruction of the poorest country in the Middle East. Our public service broadcaster doesn’t seem to mind much.

On the brink of power…

The Canary offered the BBC space to defend Coburn’s comment, but had received no reply at the time of publication.

To summarise, it appears Coburn is trying to co-opt anger over the death of Heather Heyer and direct it against Corbyn. It apparently doesn’t matter that Coburn’s comparison between Trump and Corbyn bares no resemblance to reality. As long as it could damage a genuinely progressive Labour leader on the brink of power, the truth takes the backseat.

– Jump on board with the Stop Trump Coalition.

– Help to stop DSEI (one of the world’s largest arms fairs) this September in London.

– Join or support the Stop the War Coalition. Show your support for Veterans for Peace. And take action with Campaign Against Arms Trade.