This man's cutting film will premiere at the London Film Festival, but he's blocked from attending [VIDEO] - Canary Workers’ Co-op 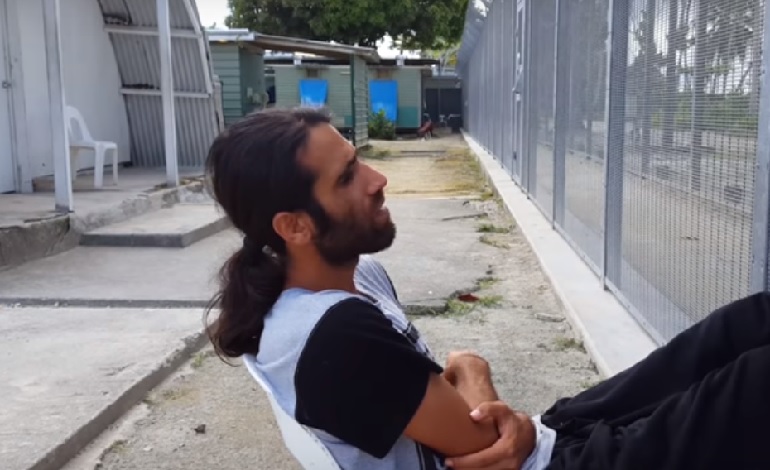 A Kurdish journalist and poet fled Iran to seek asylum in Australia. But Australian authorities incarcerated him on the remote Manus Island (Papua New Guinea). He has since made a film of what it’s like there. And its international premiere will be at the 2017 BFI London Film Festival in October. The Australian government, however, has refused to allow him to attend. So now, he’s seeking UK help to get a British visa to travel to London.

Behrouz Boochani secretly made the film via a smartphone. And it was later edited by Netherlands-based film-maker Arash Kamali Sarvestani. Now, ahead of the London Film Festival, Boochani has requested a British visa in a letter to the British High Commissioner in Australia: 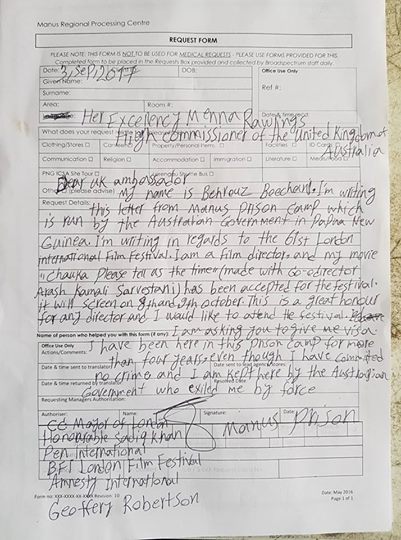 I’m writing this letter from Manus prison camp which is run by the Australian Government in Papua New Guinea. I’m writing in regards to the 61st London International Film Festival. I am a film director, and my movie “Chauka Please Tell Us The Time” (made with co-director Arash Kamali Sarvestani) has been accepted for the festival. It will screen on 8th and 9th October. This is a great honour for any director and I would like to attend the festival…

I am asking you to give me a visa… I have been here in this prison camp for more than four years, even though I have committed no crime, and I am kept here by the Australian Government who exiled me by force.

Boochani was the editor of Werya, a Kurdish political and social magazine. When all those who worked for Werya were arrested by Sepah (the Iranian Revolutionary Guard), Boochani went into hiding. On 23 May 2013, he fled Iran via south-east Asia and then by boat to Christmas Island, which is Australian territory. But the Australian authorities detained Boochani and transferred him to Manus. And he has since been there for four years.

Instead of being imprisoned and harassed, he should be welcomed for his courageous stand for democracy and human rights. He should be granted asylum in Australia. It is a profound irony that he is now experiencing levels of surveillance and harassment that have some parallels with his treatment by Iranian authorities.

Boochani has written for The Age, The Guardian, The Saturday Paper, and The Huffington Post. He is recognised by the UN as a human rights defender and is an honorary member of PEN International.

The title of Boochani’s feature-length film refers to one of the wings of the detention centre; which in turn is named after a native bird that makes a distinctive call at the beginning and end of each the day. The film was shot over months, with clips sent by WhatsApp to Sarvestani.

It has been listed by the BFI in the Documentary Competition category:

In April 2016, the Papua New Guinea (PNG) Supreme Court found that the detention centre on Manus Island was unconstitutional and ordered its closure. The Australian government, which pays PNG to host the centre, prevaricated, but eventually agreed to the closure, scheduled for 31 October 2017. But the 803 men detained there will not be allowed out of PNG. Once out of the centre, the refugees fear they will face assaults from locals. Meanwhile, the 2016 deal between Australia and the Obama Administration in the US to transfer some of the refugees to America is going nowhere.

It is tragic in extreme that Boochani and others on Manus were under the misapprehension that Australia was a liberal democracy. Because in terms of its refugee policies, it is not. And if the deal with the US fails, then Australia has a responsibility to resettle the refugees on Manus (and Nauru). They should be resettled to Australia or another country where they will not be further persecuted. But if Australia is unable to organise this, then the UN must step in.

– Tweet Sadiq Khan to urge him to act on Boochani’s behalf.

– Read The Canary‘s previous articles on Manus Island and refugees.