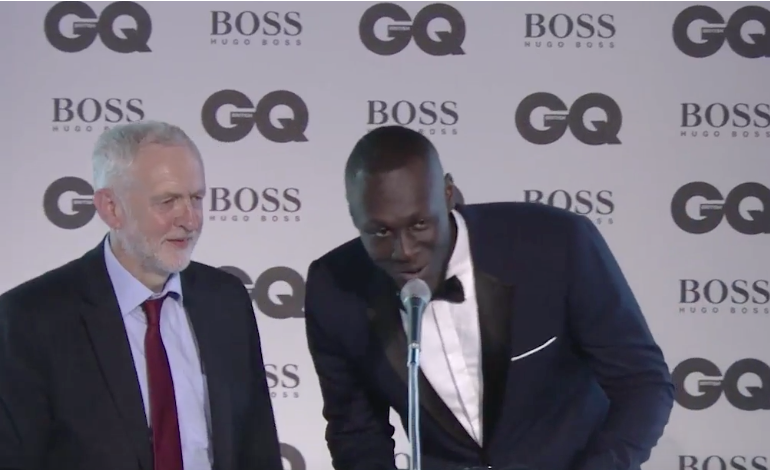 A politician presenting a music artist with an industry award isn’t normally major news. Unless, of course, the politician is Jeremy Corbyn; and the music artist is a young black man who uses a word our stuffy press have never heard before to describe Theresa May. This is how it all kicked off at the GQ Awards.

Labour leader Jeremy Corbyn was at the GQ Awards on Tuesday night, presenting the Solo Artist of the Year Award to grime artist Stormzy. The pair are well acquainted, after Stormzy and his fellow grime artists came out big for Corbyn during the election campaign. The #Grime4Corbyn hashtag produced some gems, like this mashup of Skepta and The Artist Taxi Driver, Mark McGowan.

mark's never been in a taxi when it's shut down, trust me chunky pic.twitter.com/1dfEjtyuYU

So it came as no surprise that Stormzy had a few words for May on Tuesday 5 September. Actually, just one. He called her a “paigon“, meaning someone who cannot be counted on, who lies, who pretends to be your friend but is actually deceitful.

Stormzy labels Theresa May a 'Paigon' during his 'GQ MEN OF THE YEAR' acceptance speech pic.twitter.com/zqfHQAcnRR

Unfortunately, no one operating UK newsrooms understood the word.

So instead of looking it up, they just ran with what they decided Stormzy said. Half the press went with “pagan”, and the other with “pig”. And, of course, it was all Corbyn’s fault. 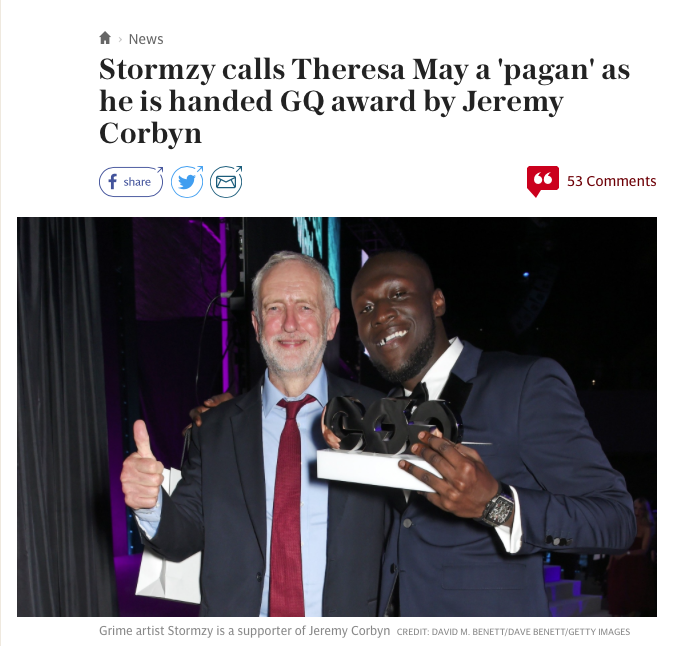 The “pig” version became true for those who wanted it to be.

Corbyn presents an award to a drunken "grime" artist who calls our PM a "pig". Very big of him. Corbyn is a joke. https://t.co/8ZMtCVm98w

A closer look revealed the source of the “pig” story: none other than Alastair Campbell. The former New Labour spin doctor tweeted from the ceremony, claiming Stormzy had called May a “pig” while Corbyn looked on. And he deleted the tweet after the rumour took wing. 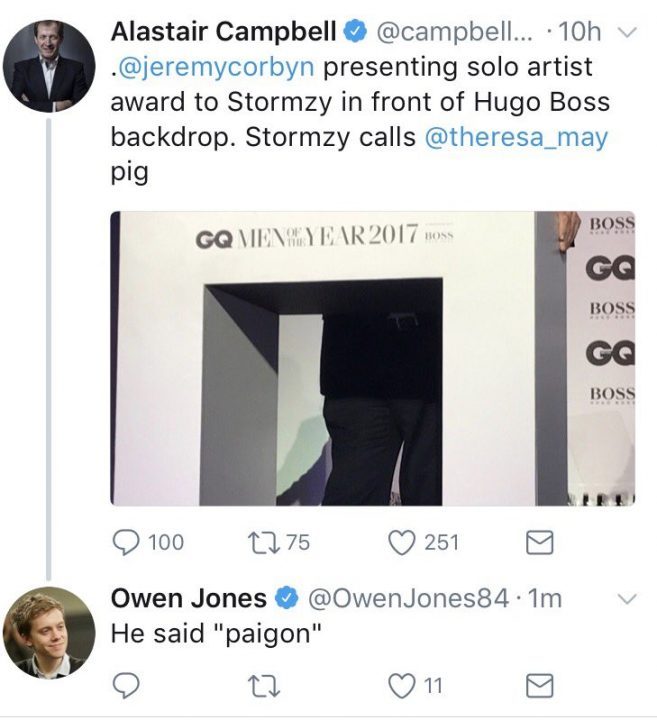 While most outlets quickly googled “paigon”, others commissioned think pieces on the word, its origins, and the woeful underrepresentation of working class and ethnic minority journalists in their own newsrooms. But the offices of Guido Fawkes decided to double down instead. This headline is surely deserving of a Godwin’s Law award.

Tallk me through this, Jezza presents award at elitist event sponsored by Hitler's outfitters https://t.co/Kd9AYKGId6

Red faces all around

In their haste to trash Corbyn and Stormzy, the establishment press and their pundits printed what they heard rather than what was said. A perfect metaphor for their entire approach to working class and youth re-engagement with left-wing politics.

– You can find out more about the grassroots left-wing movement Momentum here.

– Join and support the People’s Assembly Against Austerity here.