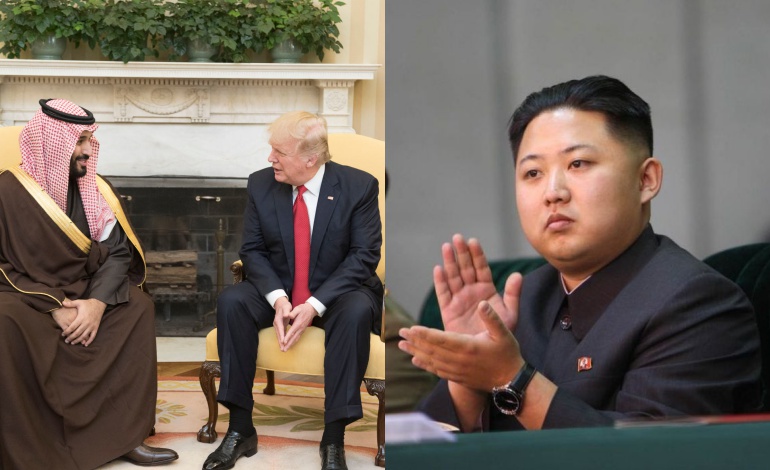 On 4 September 2017, the UN Security Council held an emergency meeting about North Korea. International tensions – in response to North Korea‘s nuclear weapon testing – are rising. But despite talk of tougher sanctions, evidence suggests that a close ally of the UK and US bought over $100m of arms from Pyongyang. And this has been linked to the funding of its nuclear programme.

You probably won’t be seeing that in the corporate media any time soon, though.

On 3 September, reports emerged that Pyongyang had launched “a hydrogen bomb that could be loaded into an intercontinental ballistic missile” (ICBN). This was its sixth, and biggest, nuclear test.

At the UN emergency meeting, US Ambassador Nikki Haley outlined attempts to limit North Korea’s use of nuclear weapons and said:

the North Korean nuclear program is more advanced and more dangerous than ever. They now fire missiles over Japanese air space. They now have ICBM capabilities. They now claim to have tested a hydrogen bomb… To the members of the Security Council, I must say, ‘enough is enough’.

The time has come to exhaust all diplomatic means to end this crisis, and that means quickly enacting the strongest possible measures here in the UN Security Council. Only the strongest sanctions will enable us to resolve this problem through diplomacy.

North Korea has an estimated 10 nuclear weapons. The US has around 6,800.

The issue of sanctions, however, is far from simple. Donald Trump said:

The United States is considering, in addition to other options, stopping all trade with any country doing business with North Korea.

China has one of the biggest trade links with North Korea. But it’s also the largest trading partner of the US, with trade worth $648.2bn. And in response to Trump, China’s foreign ministry spokesperson Geng Shuang said:

We cannot accept a situation in which, on the one hand we work to resolve this issue peacefully, but on the other China’s own interests are subjected to sanctions and are damaged. This is neither objective, nor is it fair.

Sanctions of any kind would now be useless and ineffective. They’d rather eat grass than abandon their [nuclear weapons] programme unless they feel secure.

But there’s yet another thread in this story that has not received the same level of media attention.

The Western ally which bought arms from North Korea

Leaked correspondence [pdf] shows that North Korea sold arms to the United Arab Emirates (UAE). This raised $100m to fund North Korea’s missile program. And it is also suspected that arms bought by the UAE were used in the ongoing tragedy in Yemen.

In 2015, the US Treasury department called KOMID “North Korea’s primary arms dealer and main exporter of goods and equipment related to ballistic missiles”. Since 2005, KOMID has been sanctioned by the US and UN.

The documents [pdf] also state that:

There is evidence to suggest that the UAE government was fully aware of this trade deal; but apparently made deliberate attempts to “keep its commercial channels with North Korea under the radar”. Although the Al-Mutlaq website is no longer live, the leaked documents [pdf] state:

we believe the customer(s) may be working through the UAE-based trading entity International Golden Group.

And the International Golden Group (IGG) – “a leading supplier to the UAE Armed forces, Ministry of Interior, and other defence and security authorities” – still has a large presence in the sale of arms.

The UAE is a longstanding ally of both the UK and the US. As The Canary has reported, both Saudi Arabia and the UAE are involved in a devastating military campaign in Yemen. And according to Campaign Against Arms Trade (CAAT), “the UAE is one of the UK’s biggest arms customers”. CAAT lists:

But this ‘special relationship’ goes deeper. The US is listed [pdf p2] as the world’s largest exporter of arms. And its top two customers are Saudi Arabia and the UAE.

There is further unrest in the area following the Saudi/UAE blockade of Qatar. And the UAE and US recently signed a “defence cooperation agreement”. Meanwhile, links are so strong with the UK that London has been called “the eighth emirate”.

Although the UAE apparently tried to hide its dealings with North Korea using the IGG, the latter is still going strong. In fact, the IGG has a stand at the 2017 DSEI arms fair in London.

There is a week of action from 4 to 9 September to try to stop this arms fair. As The Canary has reported:

With decent numbers, and using a diversity of tactics, it’s likely we could significantly disrupt the arms fair this year. With enough numbers, we could shut it down

So there’s a chance to prevent those who helped fund Pyongyang from profiting further from destruction and war. If politicians won’t stop them, we can.