There were angry scenes at the first PMQs of the autumn. But you won't see it on the BBC [VIDEO] - Canary 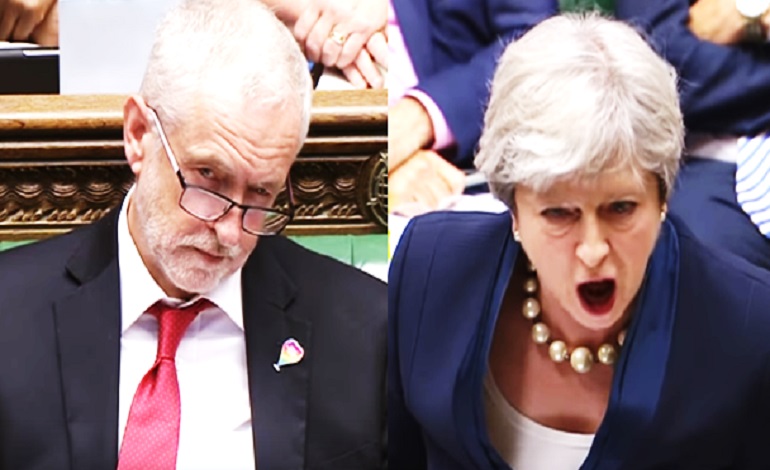 There were angry scenes at the first Prime Minister’s Questions (PMQs) of the autumn parliament. But the BBC has failed to show the reality of what happened; choosing instead to gloss over it. And it’s probably because the message struck right at the heart of Theresa May’s weak government.

The Royal College of Nursing (RCN) had organised a rally over the public sector pay cap. Simply called ‘Scrap the Cap‘, people were protesting about the government’s pay freeze for workers; and specifically, nurses.

The cap, in place since 2010, has limited public sector pay rises to just 1%. And, judging by the anger at parliament, workers have had enough. Although these scenes had not been shown on the BBC, at the time of publication: 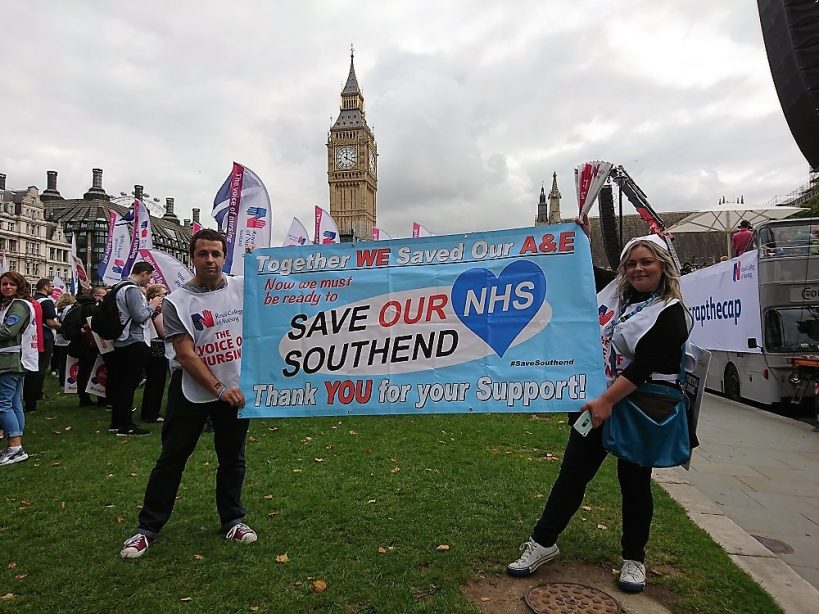 And some protesters had a direct message for May: 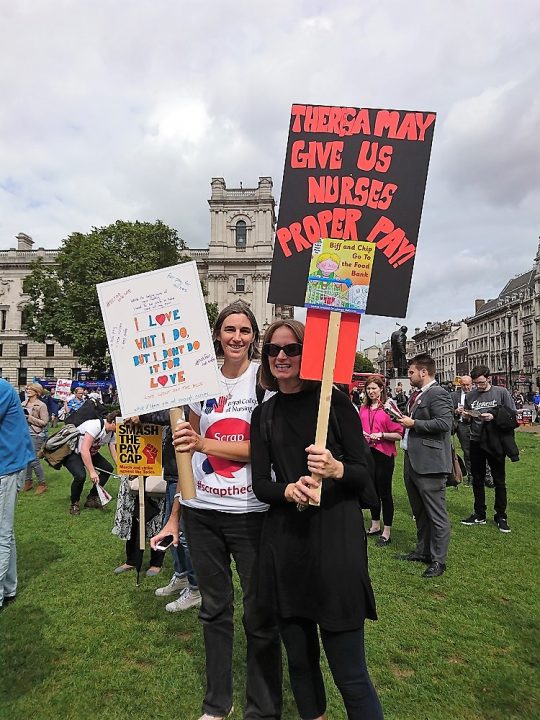 The RCN demo was well-attended, with around 500-700 people making their voices heard right outside parliament: 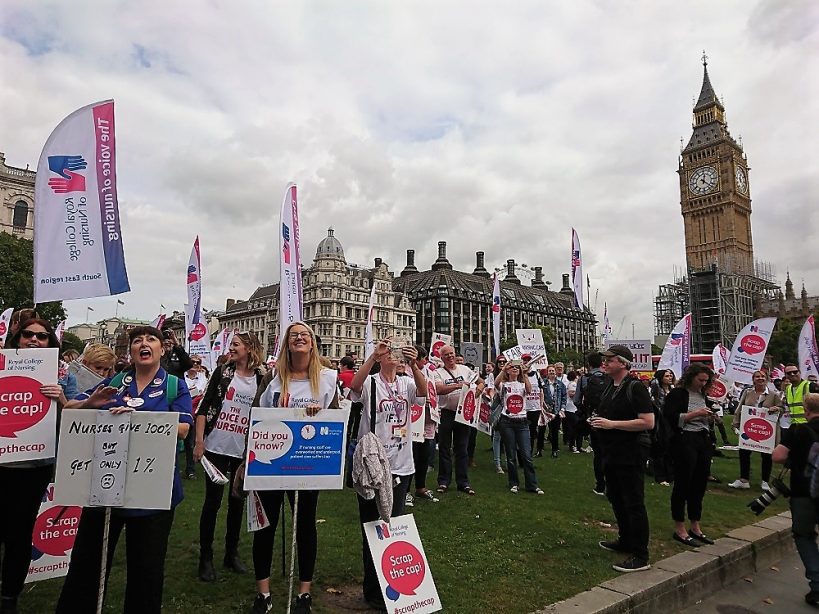 Actor Tony Robinson was a guest speaker. He told the rally that nurses were:

…the people who the state has consistently slapped in the face for the last five years.

@Tony_Robinson speaking at #scrapthecap about #nurses who supported him & his family also incredible stories of nurses suffering adversity pic.twitter.com/teCkORk82u

And the RCN General Secretary, Janet Davies, warned the government that if it did not lift the cap, then strike action would follow.

But the rally was not without its problems. The RCN had not organised adequate accessibility for disabled people; merely nominating an “accessible viewing point” to the side of college green. But this was down a flight of steps, and rally security told disabled protesters they were not permitted at, or via, the front of the demo, due to “security reasons”: 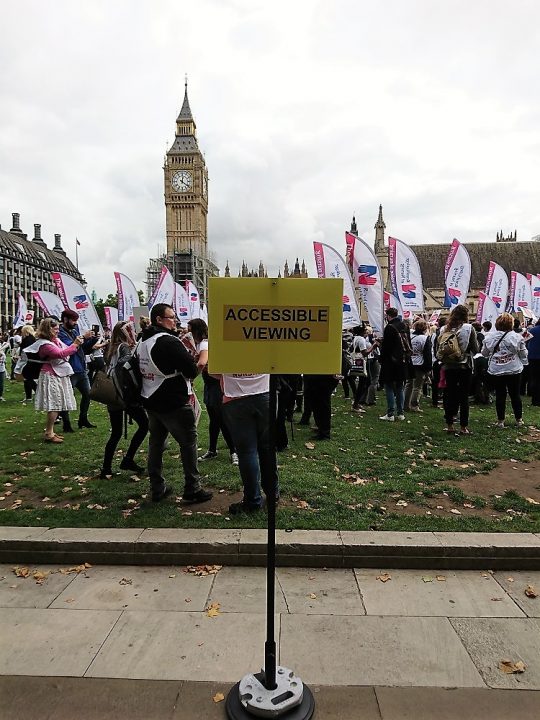 The Canary saw one disabled protester having to be supported out of his chair, while someone else lifted the chair up onto the green. Three other disabled people had to watch from the fringes of the event. This situation would have been easily resolved with the provision of ramps; something the RCN appeared to have given no thought to. RCN marshals told The Canary the lack of ramps must have been “an oversight”.

There are currently [paywall] more than 30,000 full-time vacancies within the NHS, over 11,000 of which were for nursing or midwifery positions. But the Band Five pay level for a new nurse is £22,128 per year in England.

The RCN has repeatedly reported on poverty among its members. For example, it says [pdf] that 6,500 trainee nurses were awarded hardship grants in the past three years. And the media has widely reported on nurses using food banks.

The Canary spoke to Danielle Tiplady, a staff nurse and prominent activist with the RCN. She said nurses are “leaving the NHS” because the government “doesn’t value them”. And she says the health service is “running on good will”:

Our wards are staffed to the minimum, patients are not getting the care that they deserve as staff are stretched to breaking point. The government has, for seven years, made us live under pay restraint, meaning a loss of 14% in real terms wages if not more. Staff are staying late, missing breaks and not having time to go to the toilet during busy days. But this goodwill is running out. We are tired, we are stretched and something has to change, and it has to now.

There has been a flurry of media interest this week in the public sector pay cap. And there have been rumours that May and Chancellor Philip Hammond will be lifting the cap next year. But Tiplady is unconvinced:

We keep hearing stories leaked into the press about the Tories lifting the pay cap. Until this is seen in our pay packets, we continue relentlessly with the momentum and enthusiasm the Scrap the Cap campaign has built. If the Tories fail to lift the cap in the autumn budget, they will face the first strike ballot in the history of the Royal College of Nursing. Not something a government could be proud of. This is not a decision I or my colleagues will take lightly, but we have been forced into this.

The rumours of Jeremy Hunt and other Ministers lobbying the PM to lift the cap could well be just that, as a way to not only suppress growing anger in the public sector, but also avert any more industrial action in the NHS.

But the government can only ignore workers, and the public, for so long. Because, with opinion polling showing that 76% of people think the cap should be lifted, May’s currently under-pressure government doesn’t need any more bad publicity.

A matter of respect

But Tiplady sees the situation in much more fundamental terms. As she concluded telling The Canary:

With Scottish First Minister Nicola Sturgeon reportedly considering lifting the cap, and anger among the public and workers growing, May’s position grows increasingly untenable by the day. All that remains to be seen now is how much longer she can impose the poverty-inducing cap on public sector staff. Before she loses the few shreds of credibility she may have left.

This article was updated at 10am on Thursday 7 September to correct an error. It originally incorrectly stated that a new nurse starts on a Band One pay grade of £15,404.

– Show your support for our public sector workers using the hashtag #ScrapTheCap.