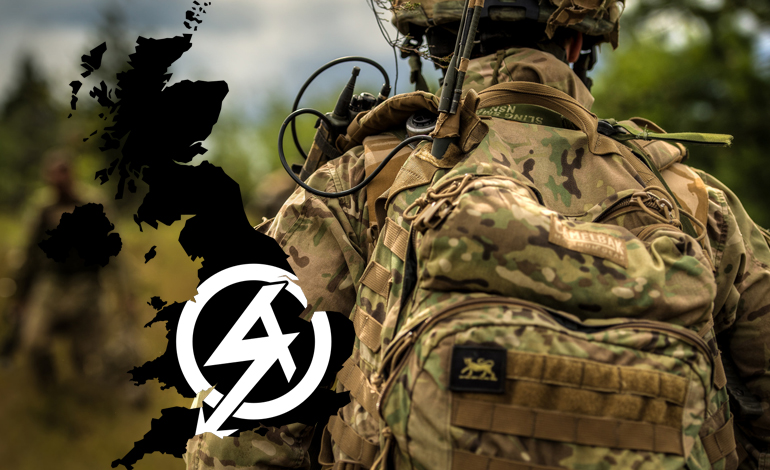 Four British soldiers have been arrested under suspicion of belonging to neo-Nazi organisation National Action (NA). The soldiers are being held for “the commission, preparation and instigation of acts of terrorism” resulting from their alleged membership to the banned far-right group. And this arrest is another reminder that white supremacist terrorism in the UK is not just a relic of the past.

The soldiers, aged 22 to 32, are being held at a civilian police station in the West Midlands. Three were arrested in Ipswich and Brecon, Wales; a fourth was arrested at RAF Akrotiri in Cyprus. All four are currently serving soldiers. It is alleged [00:37] that the 32-year-old soldier, a physical fitness instructor in the army, met the three younger soldiers on a training course. A fifth civilian is also linked to the arrests.

Boot camps were a popular tactic used by NA before it was proscribed, and continue to be a focal point for members after its December 2016 ban. In August 2017, anti-racist organisation HOPE not hate revealed that NA members are converting a warehouse in Warrington to become a gym and “fight club”. It is perhaps not surprising that the army is an appealing avenue for these people.

HOPE not hate suggests that the collapse of the British National Party (BNP) in 2014 led to many members forming new organisations. Alex Davies, figurehead for NA before its ban, was a member of Young BNP. Another member, Jack Renshaw, even stood as BNP candidate for Blackpool Council in 2014. And it seems the collapse of NA has had a similar effect.

The Canary previously called for concern about the banning of NA. It pointed out that:

They need to be challenged. They need to be opposed. But banning them will simply help them grow. And they will just reinvent themselves under another name.

Although these four soldiers have been arrested for affiliation with NA, it is important to note that there is no evidence yet that they are identifying with that group themselves. But as The Canary pointed out, NA’s actions and ideas are just emerging under new names. In June, The Ferret exposed new group Scottish Dawn as one such organisation. In August, HOPE not hate revealed another group by the name of NS131.

Though the banning of NA was a milestone in the recognition of UK-based white supremacist terrorism, it has done little to slow it. One third of Prevent referrals, meanwhile, are now for far-right white extremism. But the revelation that the British army is now potentially being used as a training ground for white supremacist terrorism should make the government take this threat much more seriously.

– Learn more about far-right and fascist activities in the UK.