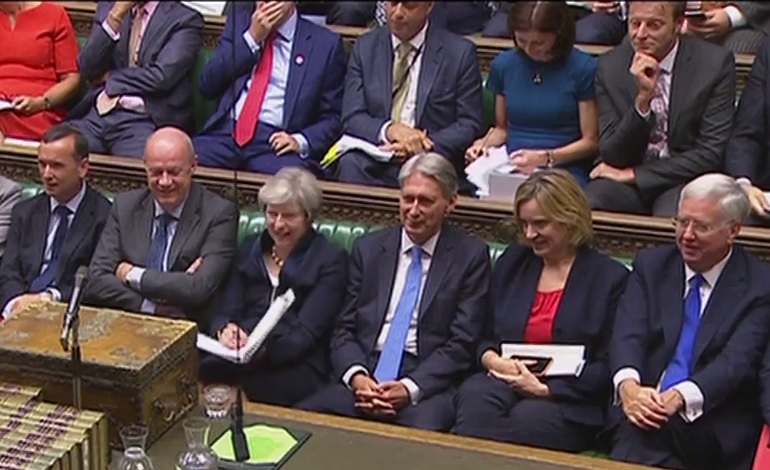 Right now, Hurricane Irma is ravaging the Caribbean. And it’s doing so after South Asia faced its worst floods in a decade. Texas, in the US, is also recovering from Hurricane Harvey.

But as these catastrophic climate-change related events unfolded, the UK government casually uploaded a document to its website. And in that document, it admitted to the world that it has whittled down the amount of Foreign Office staff working in one particular area.

On 4 September 2017, the Foreign and Commonwealth Office (FCO) revealed that the amount of staff working on climate change issues has reduced by more than 50% over the last seven years.

Hurricanes. Flooding. Hottest year on record.
And this is how the Government responds.
Utterly disgraceful. #Climate https://t.co/em5Tgim2BY

There can be no clearer illustration of how little the UK government cares about the world’s populations; and how ill-equipped it is to tackle the momentous climate challenges ahead.

A government response to a freedom of information (FOI) request revealed the shocking figures. According to the FCO, there was a total of 554 staff, full-time or part-time, working on Climate Change and Energy (CCE) in March 2011. This refers to staff working overseas and in London. But by January 2017, the number was down to 221.

In its response, the government took great pains to explain that these figures don’t include “locally engaged members of staff”. Without adding those, it insisted, the figure “significantly under-represents” the “full scale” of work it does.

The FOI request, however, had also asked for the total number of “full-time equivalent” staff working overseas on the issue as of January 2017. And in response, the government included both staff working overseas (already included in the figure above) and locally engaged staff in its answer. The grand total, of full-time and part-time workers, was 112.

Bur dramatically slashing the amount of staff working on climate change isn’t the only indication of the government’s lacklustre approach to this life-threatening issue. Under previous prime minister David Cameron, analysis showed the Department for Environment, Food and Rural Affairs (Defra) faced budget cuts of 57% in real terms. And when his successor Theresa May took over, she abolished the Department for Energy and Climate Change entirely.

Two peas in a pod

Unfortunately for the world, the Tory government currently has the perfect partner in crime running things across the Atlantic. US President Donald Trump famously said climate change is a Chinese hoax. And less amusingly, most of his appointments appear to believe that the climate should be sacrificed on the altar of industry.

But this raises no alarm in the Tory ranks. In fact, when Trump pulled out of the Paris Climate Agreement in June, May didn’t even condemn the decision; unlike the majority of other European leaders. That’s because, essentially, these two governments are in step. Despite promising to “hug a husky” in order to get elected in 2010, the Tories are seemingly determined to “get rid of all the green crap” once and for all.

Now, it appears that the “green crap” this government is axing also includes the time FCO staff spend tackling climate change issues. Even as the world is awash with floods, hurricanes and record-breaking temperatures; events undeniably linked to climate change.

This staff-cutting revelation, along with the majority of its other environmental decisions, really does put the Tory government to shame.

– Share your thoughts on the government’s climate change efforts with your MP.