These are the 5 words Theresa May just used to describe our nurses. The PM is toast. [VIDEO] - Canary 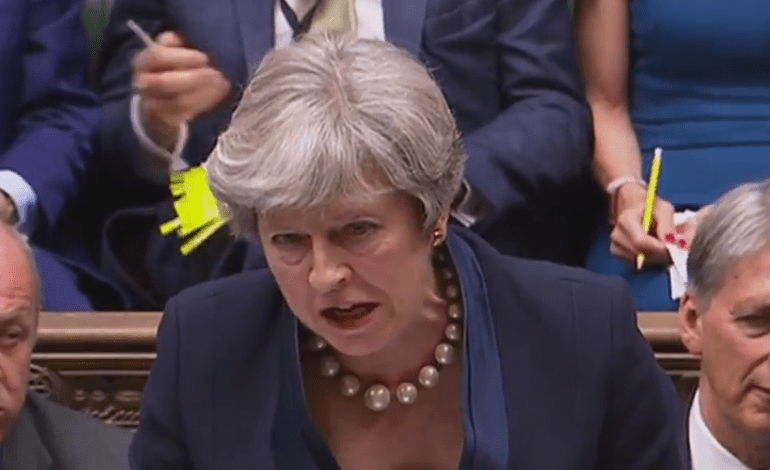 At the first Prime Minister’s Questions (PMQs) after summer recess, Theresa May used five words to describe our nurses. On top of her already precarious premiership, the outrage that followed suggests the Prime Minister is toast.

Responding to a question from Labour leader Jeremy Corbyn about the public sector pay cap, the Conservative leader branded [9.05] nurses “this, that and the other”.

What we have seen from what he [Corbyn] does in this house and outside this house is consistently stand up and ask for more money to be spent on ‘this, that and the other’

For most of the past seven years, pay rises for nurses and other public sector workers (except MPs) have been capped at 1%. And it’s actually much worse than that. Given the rising price of goods and services, the cap represents a pay cut of around 14%. Many workers have found themselves forced to use food banks as a result.

Today, thousands of nursing and other healthcare staff are outside parliament. They are demanding that this government scrap the 1% pay cap. Poor pay means experienced staff are leaving and fewer people are training to become nurses. There’s already a shortage of 40,000 nurses across the UK.

Meanwhile, Britain’s richest 1,000 families are well on their way to tripling their wealth since the financial crisis. Since 2009, these families have increased their fortune by over 155%. It’s no wonder the UK is the most unequal country in Western Europe. Aside from the grotesque inequality in the UK, Corbyn also pointed out [9.57] in response:

May’s disregard for public sector workers who aren’t Tory MPs seems to no longer be the preserve of her policies; but also her rhetoric. After she reduced nurses to “this, that and the other” at PMQs, the backlash was strong:

Corbyn stands up for ordinary folk while May evades ordinary folk like the plague – to her we are all just "this, that and the other" #PMQs

Theresa May just described giving nurses a pay rise as spending money on "this, that and the other". Oh dear. #pmqs

Theresa May seems to think nurses asking for a fair pay rise are "this, that and the other". Gave her game away #PMQs

May: Labour wants money spending on 'this, that and the other.' We call them doctors, nurses, teachers, police, firefighters – our frontline

PM describing our public sector workers as this, that and the other. All they are asking is to be treated fairly after years of austerity!

If you want to know about Tory attitudes to the NHS, Theresa May just referred to nurse pay as "This, that and the other" #PMQs #scrapthecap

At PMQs, almost everything May said was irrelevant to Corbyn’s questions. She continued with the tired old rhetoric that voters seem to have had enough of. After being in government for seven years, May continued to blame Labour for the state of the economy. She also refused to back McDonald’s workers, who are striking because of harrowing working conditions. Nor would she condemn the McDonald’s CEO, who Corbyn said earns around 1,300 times what front-line staff earn.

On top of that, the sitting Prime Minister used her first PMQs after summer to insult hard-working nurses. She’s toast.

– You can find out more about the grassroots left wing movement Momentum here.

– Join and support the People’s Assembly Against Austerity here.