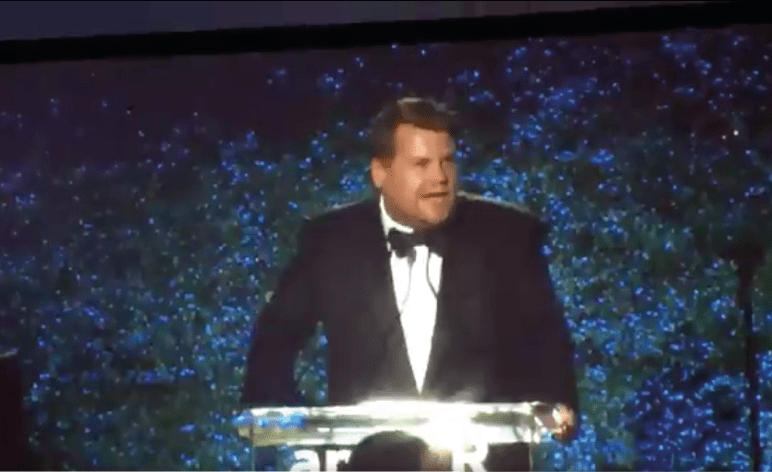 Film producer Harvey Weinstein has recently been accused of multiple accounts of rape and sexual abuse. The scandal has revealed to the world what several Hollywood insiders have described as an “open secret”. Weinstein has “unequivocally denied” any allegations of non-consensual sex.

British comedian James Corden has also waded into this issue. But the jokes he made have been poorly received.

Corden was speaking at the amfAR Gala in Los Angeles. Describing the evening in LA, Corden said it was:

so beautiful, Harvey Weinstein has already asked tonight up to his hotel to give him a massage.

Harvey Weinstein wanted to come tonight, but he’ll settle for whatever potted plant is closest.

This led to responses such as:

so not only is James Corden making jokes about the sexual assault allegations against Weinstein, but it seems they're also pals – pic.twitter.com/yO4xE6uByU

Some people have argued that the jokes come at Weinstein’s expense, and therefore they work:

Some confusion here. James Corden was making jokes at Harvey Weinstein's expense. As is everyone else on US TV. Correctly. pic.twitter.com/om0bZGI8cG

Others disagreed with the idea that Corden was managing to do this:

I really like James, and he is a lovely man, but his jokes didn't excoriate Weinstein or amplify his faults; they made them sound trivial.

HW wasn’t the butt of a single joke – the women he abused were. It’s demeaning.

To be clear, sexual assault is no laughing matter. I was not trying to make light of Harvey’s inexcusable behavior, but to shame him, the abuser, not his victims. I am truly sorry for anyone offended, that was never my intention.

People once more reacted to what Corden said:

"sexual assault is no laughing matter"

makes 3 jokes about sexual assault, admonishes audience for not laughing

What matters isn't the intention, it's what you did. That sort of error of judgement is part of the problem and deserves no platform

Has he? A Brit wouldn't spell behavior without the u so I'd say this is a statement crafted by his management.

The issue, then, is that these weren’t just jokes about Weinstein; they were jokes about the abuse he perpetrated. And if you were one of the many people who’ve reportedly been abused, would you want to hear instances of abuse being used as punchlines? Especially when one of the major problems we currently face is that abuse is still not taken seriously enough.