Most of us know this famous picture. But few know the bravery and tragedy of the white guy. - The Canary 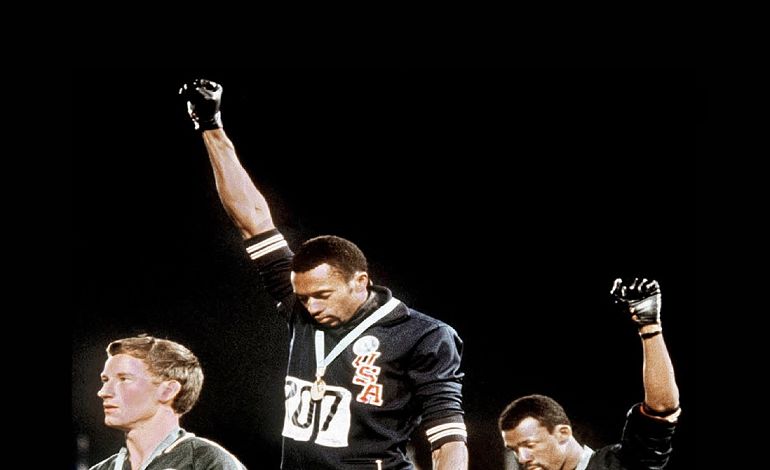 The famous image from the 1968 Olympics depicts an iconic protest against ethnic inequality. African American athletes Tommie Smith and John Carlos raised their black-gloved fists in solidarity with oppressed ethnic minorities at home and around the world. But what happened to the white guy who stood with them? It’s a story filled with bravery and tragedy.

Many of us know this famous picture of Tommie Smith and John Carlos. But few know the bravery and tragedy of the white guy, Peter Norman. pic.twitter.com/A96hzYtdvI

Who is the white guy?

The white guy is Peter Norman; an Australian athlete who won the silver medal in the 200m at the 1968 Mexico Olympics. His medal-winning time remains the Australian record almost 40 years later. And in Mexico City on 16 October 1968, Norman stood in solidarity with Smith and Carlos. In fact, he gave Carlos and Smith the black gloves, and wore an Olympic Project for Human Rights badge of justice and equality. But his choice to ally himself with the movement for ethnic equality won him no favours at home. With Australia’s historic and current oppression and exclusion of indigenous people, it was a spotlight the national government and Olympic Committee of Australia did not want shone on their activities.

So instead, they ostracised Norman. Despite him qualifying for the 1972 Olympics, Australia refused his entry to the games. He never ran for his country at another Olympics. Norman’s brother, Laurie, told the Australian Broadcasting Corporation (ABC):

He qualified for both the 100 and 200 metres for the Munich Games but just wasn’t selected. I guess that could be considered as a ban but he was pretty disappointed by that

And while Carlos and Smith became figureheads of the US civil rights movement, few Australians know the name ‘Peter Norman’. Speaking out against his treatment, John Carlos said:

If we [Carlos and Smith] were getting beat up, Peter was facing an entire country and suffering alone.

After suffering a career-ending achilles injury in 1985, and struggling to find work, Norman slipped into depression, and drug addiction. But he continued to fight inequality in his country, speaking against the treatment of indigenous Australians.

He died of a heart attack in 2006, aged just 64. Carlos and Smith travelled to Australia to serve as pallbearers at his funeral.

Norman’s son went on to make the film Salute to honour the courage of Carlos and Smith, and of his father who stood with them. And in 2012, the Australian government issued a formal apology to Peter Norman for his treatment. His 91-year-old mother was present at parliament to hear the apology. During his speech, Australian Federal lawmaker Andrew Leigh (Labor) told parliament:

After Carlos forgot his gloves, Norman came up with the idea that the two Americans should share the one pair of gloves. A protest like this, on a global stage, had never been done before.

At the time, it was electrifying. Racist slurs were hurled at Smith and Carlos. IOC President Avery Brundage – a man who’d had no difficulty with the Nazi salute being used in the 1936 Olympics – insisted the two be expelled. In that moment Norman advanced international awareness for racial equality.

And his old ally Carlos had words on the matter too, saying:

There’s no-one in the nation of Australia that should be honoured, recognised, appreciated more than Peter Norman for his humanitarian concerns, his character, his strength and his willingness to be a sacrificial lamb for justice.

The Australian Olympic Committee continues to deny it mistreated Norman in any way.

Carlos and Smith also paid a high price for the protest. Both men were evicted from the Olympic village and condemned by the athletic community. And when they arrived home in the US, they were met with abuse and death threats. Time Magazine wrote of their stand: “‘Faster, Higher, Stronger’ is the motto of the Olympic Games. ‘Angrier, nastier, uglier’ better describes the scene in Mexico City last week.” Amid the immense pressure, Carlos’s wife Kim committed suicide.

Reflecting on the devastating aftermath, Carlos remains defiant. “It lasted for about 35 years,” he told the Telegraph for an article recently.

You couldn’t find a job. Friends who you thought were your friends turned their backs on you.

Any money you had in the bank was starting to dissipate. It affected my wife to the point where she couldn’t deal with it any more and took her life. But I tell people, ‘Everything that happened, it could have happened 1,000 times over and I wouldn’t have changed it’.

Today, Carlos remains a high profile figure in social justice movements. He travels the world, as an elder with a story. And in this writer’s opinion, the world is a better place for having him in it.

The story of Carlos, Smith and Norman remains as powerful today as in 1968. It is the story of human beings standing for one another, whatever the consequences; and of bearing those consequences with dignity and fortitude.

– Do not accept prejudice in your own communities. Make a stand.