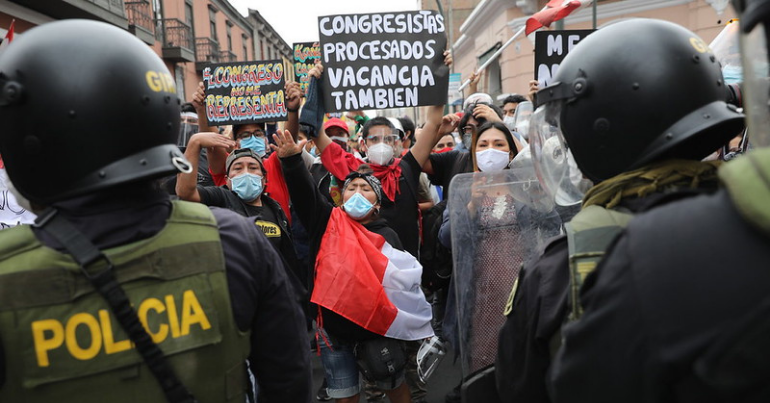 Police used firearms and tear gas against protesters, according to Amnesty International. It also reported evidence that police injured protesters by beating them.

This political crisis is generating a human rights crisis due to the violent repression of the protests. The authorities must prioritize the protection of the population over any political interest.

The protests began after Peruvian president Martín Vizcarra was impeached on 9 November. 105 congress members voted to remove Vizcarra, accusing him of bribery and handling coronavirus (Covid-19) in Peru poorly. Several political commentators and scholars have called the impeachment a coup.

An open letter signed by academics from all over the world said:

The Peruvian constitution grants the people, not the Congress, the right to elect the president. Congress can only remove a president in cases when certain specific conditions apply. Rumours, accusations, and ongoing judicial investigations are not included among those conditions. Thus, Congress has unlawfully removed president Vizcarra, in what is in effect a parliamentary coup and not an impeachment.

Congress members attempted to impeach Vizcarra in September. The president previously dissolved congress last year, saying they obstructed his ‘anti-corruption’ policy. Despite the election of a new congress in January, there have still been repeated clashes between the president and congress.
Vizcarra was replaced by former congress leader Manuel Merino as interim president. Merino was leader of the opposition against Vizcarra’s centrist government, as part of the centre-right party Popular Action.

‘Abusive use of force’

Since then, tens of thousands of people have taken to the street to protest against the impeachment. Police have been accused of using excessive force when dealing with protesters:

Two protesters were killed in the clashes at the weekend. Jordan Sotelo was shot four times. Jack Pintado was shot eleven times.

There was irrational, abusive use of force in Lima. I demand that the president of the republic shows his face and gives explanations to the country

As a result of widespread outrage, president Merino announced his resignation on 15 November after only five days in office.

In 2018, Peru’s president Pedro Pablo Kuczynski resigned as it looked highly likely he would be impeached. The impeachment efforts were led by right-wing party Fuerza Popular.

There have been warnings that the growing political instability in Peru may harm attempts to control the spread of coronavirus.

Peru currently has the third highest coronavirus death rate per hundred thousand people in the world.

It is unclear who will serve as president after Merino’s resignation. Peru is due to hold national elections in 2021, at which both congress and the presidency will be contested. Notable candidates include former footballer George Forsyth, and César Acuña, head of the Alliance for Progress party that tried to impeach Vicarraz in September.