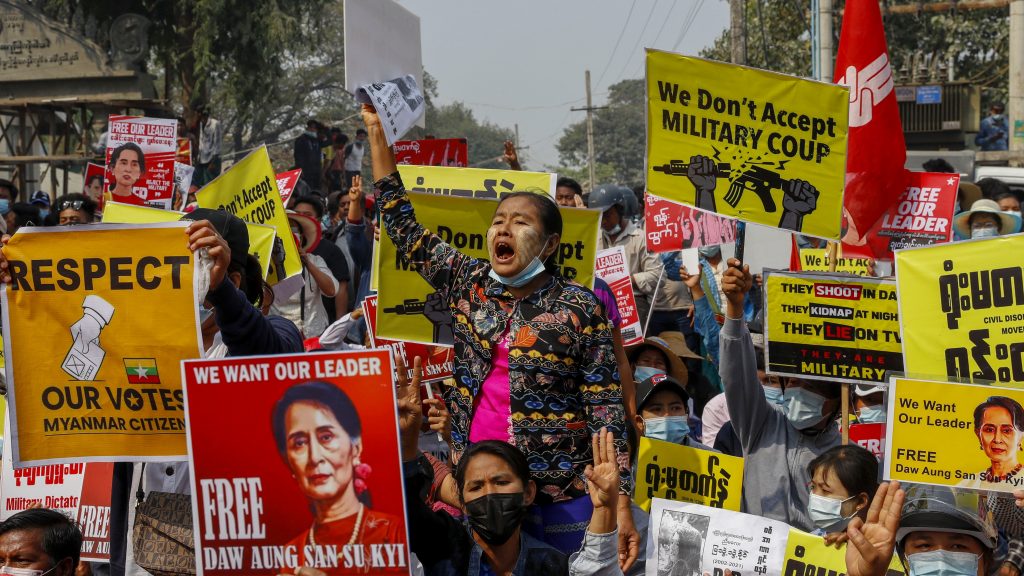 Demonstrators against Myanmar’s military takeover returned to the streets on Thursday after a night of armed intimidation by security forces in the country’s second biggest city.

The police rampage in an area of Mandalay where state railway workers are housed showed the conflict between protesters and the new military government is increasingly focused on the businesses and government institutions that sustain the economy.

State railway workers had called a strike on Sunday, joining a loosely organised Civil Disobedience Movement (CDM) that was initiated by medical workers and is the backbone of the resistance to the February 1 coup that removed the elected civilian government.

One labour activist who did not wish to be named said:

Many workers and citizens of Myanmar believe that CDM is very effective for making the junta fail.

That’s why health, education, transportation, different government departments and banks’ employees are participating in CDM together.

The railway strike has received support from ordinary citizens who have placed themselves on tracks to stop trains the military have commandeered.

The efforts by Mandalay residents to block a railway line on Wednesday apparently triggered the retaliation that night.

Less than an hour after the 8pm start of the nightly curfew, gunshots were heard as more than two dozen men in police uniforms, shields and helmets, marched in tight formation by the railway workers’ housing.

Numerous videos posted on social media showed flashes as shots were heard, and some were shown shooting slingshots and throwing rocks at buildings. Calls of “left, right, left, right” could be heard along with shouts of “shoot, shoot”.

Several reports included photos of people with small wounds, with claims they were caused by rubber bullets. Some unconfirmed reports said several railway workers had been arrested.

The junta has said it took over — preventing parliament from convening and detaining the nation’s elected leader Aung San Suu Kyi and others — because the November election was tainted by voting irregularities.

It replaced the election commission that affirmed Ms Suu Kyi’s party won by a landslide and says it will hold a new election in a year’s time.

The Biden government in America has imposed new US sanctions on Myanmar because of the coup, and the United Nations and other country’s governments have called for Ms Suu Kyi’s elected government to be restored.

Opponents of the coup are also urging foreign businesses to cut their ties to Myanmar operations they believe benefit the military.

About 200 people demonstrated on Thursday near Kanbauk, in the south of the country, outside premises involved in a major pipeline operation that pumps gas from offshore fields for export.

The demonstrators moved between the premises of Total of France, PTTEP of Thailand and Petronas of Malaysia and later joined with a larger anti-coup demonstration in Kanbauk.

Extracting industries, such as gas and oil drilling and jade mining, are key sources of foreign revenue for Myanmar. Rights campaigners have appealed to foreign companies involved in those industries to stop paying revenue to the new military government.

Street protests continued in other cities. In Yangon, some tried to hinder security forces by abandoning cars in streets. But small groups of men, including several dressed in Buddhist monks’ robes, attacked several drivers and their vehicles, smashing windshields in some cases.

On Wednesday night, the military for the fourth day in a row, ordered an internet blackout, almost entirely blocking online access from 1am to 9am.