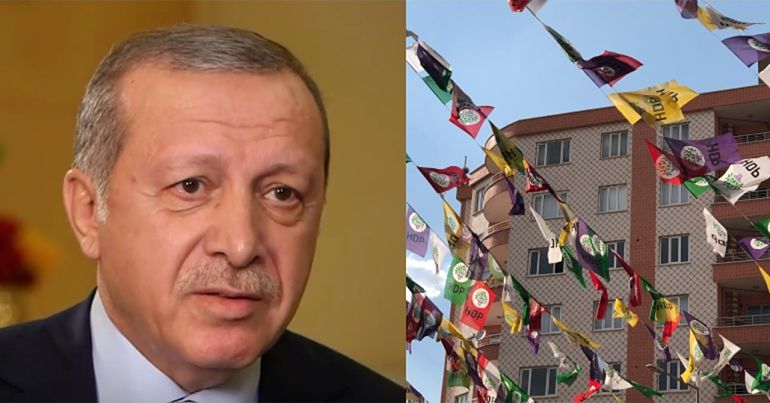 A show trial of 108 of Turkey’s radicals is ongoing in Ankara. The trial has been ongoing since April 2021. 21 of the defendants are currently remanded in prison. All 108 face aggravated life sentences.

Many of the defendants are from the left-wing, radically democratic People’s Democratic Party (HDP), the third largest party in the Turkish parliament. Others are connected to civil society organisations and to the Kurdistan freedom movement. The chief prosecutor in the case has demanded that Selahattin Demirtaş – the former HDP co-chair – face the extraordinarily long sentence of 15,000 years in prison if he’s convicted.

Despite its role as an electoral party, the HDP is part of the struggle for radical democracy in Turkey. The HDP is not only anti-capitalist but part of a movement which critiques the concept of the state itself. This movement intends to move beyond nation states by encouraging the reliance on people’s directly democratic organising at the street or neighbourhood level, confederated across regions.

The allegations against the defendants relate to demonstrations that broke out across Turkey in 2014, following Reccep Tayyip Erdoğan’s support for the siege of the city of Kobanî in Rojava – Northeast Syria – by Daesh (ISIS/ISIL). Erdoğan’s AKP government was preventing vital supplies from reaching the besieged city.

Kobanî was eventually liberated by the Kurdish-led People’s Protection Units (YPG). Many radicals from inside Turkey’s borders crossed into Rojava at that time to join the YPG’s fight. The charges against the defendants on trial in Ankara are serious, and include terrorism and murder. One of the lawyers for the defendants in the Kobanî trial, Ibrahim Bilmez, spoke to The Canary about the case.

A purge to silence the movement for radical democracy

The ‘Kobanî case’ is part of an onslaught by the Turkish state, aimed at silencing political radicalism within Turkey. That onslaught includes plans to criminalise and ban the HDP.

Last year I travelled to Istanbul and interviewed Ibrahim Bilmez, who is one of the lawyers for the defendants in the Kobanî trial. Bilmez is personally representing Ayla Akat Ata from the HDP and Sebahat Tuncel, the former co-leader of the Democratic Regions Party (DBP). Overall, his firm is representing all of the 108 defendants on trial, and is working with many other lawyers as well.

I asked Bilmez whether he thought the trial in Ankara was connected to the moves to ban the HDP. He replied:

There definitely is a connection. They’re trying to push the Kobanî case through and speed it forward. So that they can say ‘look at all these HDP ‘terrorists”. And then it would be very easy for them to shut down the HDP by pointing to them already being convicted in this Kobanî case

Bilmez said that the Ministry of justice had tried to speed up the Kobanî case by replacing a judge – who wasn’t moving things along fast enough – and replacing him with a judge “who’s more racist and closer to their ideas”. The assistant judges in the case have also been changed. According to Bilmez:

Whenever they want they can just change the judge. You can’t talk about justice in this kind of situation.

Bilmez argued that the Ministry of Justice is “answering directly to Reccep Tayyip Erdoğan”. He said:

basically the political system and political power politics is interfering with and directing the Kobanî case, and moving the case forward.

The Turkish state meddling with the judicial system is nothing new. Since Turkey’s failed coup attempt in 2016, nearly 4,000 judges and prosecutors have been sacked.

The Kobanî case relates to a tweet by the HDP executive council from October 2014, calling on people to take to the streets in solidarity with Kobanî. The message read:

Urgent call to our peoples […]! The situation in Kobanê is extremely critical. We call on our peoples to take to the streets and support those who are already on the streets to protest against the attacks of ISIS and against the embargo of the AKP government.

People took to the streets to protest in support of the people of Kobanî, and against Daesh’s siege of the city. Supporters of Daesh and Kurdish Hezbollah – an Islamic group which received arms from the Turkish state – attacked the demonstrators, and terrible bloodshed ensued. Up to 53 people died over the course of three days of the uprising. Bilmez told me that the majority of those who died were supporters of the HDP.

According to a report by the Human Rights Association (IHD), 682 people were injured during the protests. At least 323 people were arrested. In the course of the uprising, there were also arson attacks on shops and public facilities. The government holds the HDP responsible for the incidents.

So now they’re turning it around on the HDP years later, and saying ‘you called those people to the streets. You encouraged this violence to happen… and you’re responsible for the deaths that happened’

The strange thing is that basically they’re accusing HDP of being responsible for sending HDP people to their deaths.

Bilmez also pointed out that, in the years since 2014, people have already stood trial for charges relating to the uprising, and that it’s a basic principle of law that people should not be convicted twice for the same allegation.

A strategy to neutralise the opposition

The Turkish state has good reasons for taking an interest in the Kobanî case. Several people who are close to the HDP believe that the state wants to carefully stage-manage the banning of the HDP in order to benefit the ruling AKP party in the next election. Erdoğan‘s AKP is likely to face decreasing public support because of the crashing Turkish economy and spiralling government debt.

It would benefit the AKP greatly if the HDP is banned just before the next election.

“A form of abuse”

Bilmez told me that a trial like the Kobanî case would normally take 5-7 years to hear all of the evidence. He said that the case was being rushed in order to obtain convictions, which would provide the evidence for the banning of the HDP.

As of December 2021, Bilmez told us the trial was taking place at two week intervals with the court sitting for two weeks and then breaking for one. Hundreds of files of evidence have been served by the prosecutor, and “every day there is a new dossier”.

Bilmez told me it was impossible for his clients to adequately prepare a defence in these circumstances, as there was no time being allowed to consider the huge volumes of prosecution material. This was why the lawyers in the case staged a protest last year, walking out of the proceedings. Bilmez said that the current conditions were “a form of abuse” against the defendants.

“You can’t say that there is justice in Turkey”

Bilmez said that countering the ‘blatant attack’ posed by the Kobanî case was bringing radical lawyers together:

for Kurdish lawyers and for Left-wing lawyers in the country, we see that it’s a blatant attack. So there’s a lot of solidarity to come together and be active.

Turkey is moving away from having any kind of just government. You can’t say that there is justice in Turkey.