While the Tories do austerity, Germany spends its way out of crisis 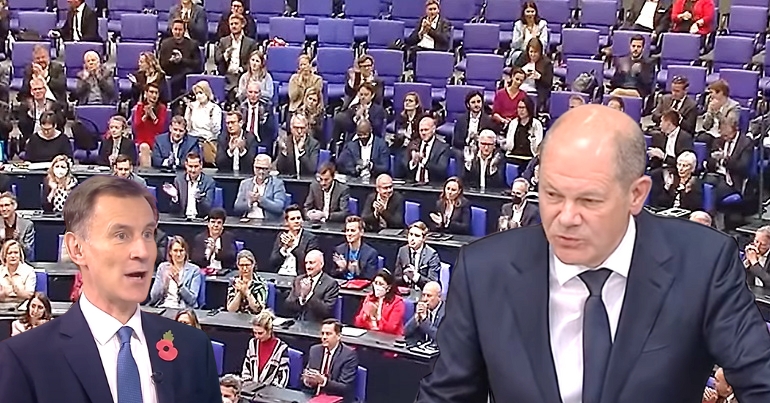 The German government has announced new measures to combat its cost of living crisis – exposing the Tories’ class war in the process. The German government’s actions show that governments don’t have to implement austerity as a knee-jerk response to financial crises. However, its agenda still isn’t perfect by any means – and could spell trouble for the future.

Germany: borrowing its way out of crises

As Agence France-Presse (AFP) reported, the German government is borrowing its way out of the cost of living crisis. Finance minister Christian Lindner stated on Tuesday 22 November that Germany will have to take on more debt than expected in 2023. He said this was to combat the energy crisis that has left Europe’s biggest economy facing “great economic uncertainty”. The government expects the German economy to tip into recession next year and shrink by 0.4%. It also thinks new net borrowing next year will climb to €45.6bn. This is more than double the €17.2bn it initially estimated. The budget plan will be discussed in the Bundestag lower house of parliament. It is set to be approved on Friday 25 November.

However, Lindner stressed that Germany would return to its constitutionally enshrined “debt brake” in 2023. This limits annual new borrowing to 0.35% of gross domestic product (GDP). The government had lifted the debt brake at the start of the coronavirus (Covid-19) pandemic in 2020. However, reinstating it has been a priority for Lindner, a fiscal hawk from the pro-business Free Democratic Party (FDP). Even so, the German government is refusing to raise taxes.

Meanwhile, €200bn of the €300bn it will be borrowing is to help shield households and businesses from higher energy costs. Now, compare this to the UK Tory government’s response to the cost of living crisis.

UK chancellor Jeremy Hunt announced more austerity in his budget. As the Guardian reported, the Tory government will be cutting £28bn from public spending, as well as pushing through tax rises. Meanwhile, in the financial year 2022/23, the UK government has spent just £21.3bn on support for people due to the energy price chaos. It has also committed £40bn to business support. However, Germany’s €200bn spending dwarves this – even when you factor in its larger population.

Hunt’s approach to the UK’s finances has been criticised by many. For example, think tank the New Economics Foundation pointed out the richest 10% are better off – while the poorest people suffer more:

Lots of talk this morning about the affects of tax rises on the 'squeezed middle', but over the next two years it's the lowest income families who will see their incomes fall furthest behind the cost of essentials. pic.twitter.com/L6WgvLVRw4

has set up… the biggest potential economic disaster since way before living memory where household debt default will be commonplace and those owed the money – from banks, to landlords, to energy companies and more, will not be able to handle that. In other words, this will not just be a financial problem for the households involved in this disastrous situation: we face banking and corporate meltdowns too.

So, the UK government is doing what it does best – protecting the rich while hammering the poorest – while Germany is spending far more without major cuts. However, while Germany’s approach is better, it is far from perfect.

Germany; putting off the inevitable?

As AFP reported, in order to keep Lindner’s commitment to the debt brake, the government has announced “special funds”. It considers these separate from the regular federal budget. Both will be financed by taking on new debt. Critics, including opposition parties, have decried the separate funds as a fiscal sleight of hand. But Lindner defended his 2023 budget – which will total around €476bn – as “solid”, and said there “was no alternative”.

The government’s economic advisors said that Germany should temporarily raise taxes on higher earners to help finance the new spending. But Lindner again ruled out any tax hikes, saying:

That would be extremely risky from an economic point of view and would be to the detriment of jobs and investment. Of course, Germany’s approach is far from perfect.

Currently, Germany’s approach is all a bit ‘borrow now, worry later’ while making sure it also protects the richest people. Whilst that may bring relief in the short term, under the capitalist system the German government (like the UK ones over the past 12 years) will claim it will have to pay this borrowed money back at some point. So, Germany’s austerity may come eventually – just maybe not for the time being.