CoP19: Decisions give two songbirds a chance to keep singing 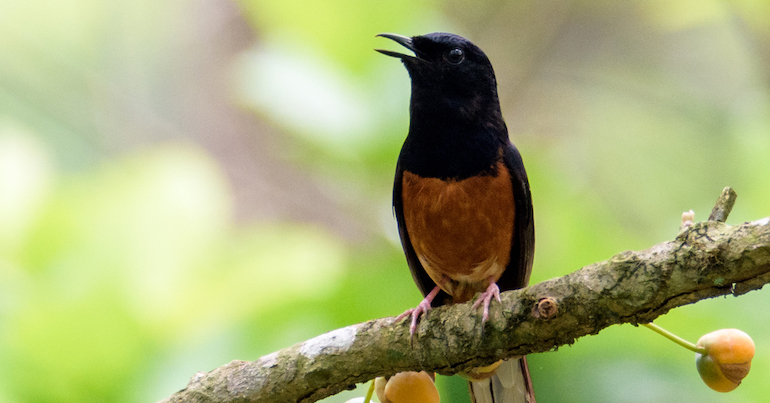 Two species of songbird secured new trade-related protections at the World Wildlife Conference on 21 November. Thanks to the decisions, which participant countries agreed by consensus, both the critically endangered straw-headed bulbul and the white-rumped shama will recieve some safeguarding in international trade.

These are just two of many songbird species in need of protections, largely due to the pet trade. However, systematic failures of the wildlife trade body – known as the Convention on International Trade in Endangered Species of Wild Fauna and Flora’s (CITES) – mean that the melodious SOS calls of many of them aren’t yet being heard.

CITES regulates the international trade in a number of species considered at risk of extinction. Its conference of the parties (CoP19) is taking place in Panama between 14 and 25 November. This event brings together CITES parties, meaning governments, to make decisions that will determine the fate of hundreds of species.

The body lists the species it oversees in three appendices. These listings ostensibly relate to how at risk the included species are, and the trading rules differ accordingly. It’s important to emphasise, however, that CITES-listed species are generally still subject to trade and exploitation.

As China Dialogue‘s Aron White highlighted, parties put forward proposals for the two Southeast Asian songbirds at the conference. One proposal related to the white-rumped shama, calling for CITES to list the songbird on its Appendix II.

🐦 Songbirds now being discussed at #CITESCoP19. 🇲🇾 Malaysia and 🇸🇬 Singapore are proposing to add the White-rumped Shama, a songbird from South and Southeast Asia, to Appendix II, and highlight high levels of illegal international trade (30,000 seized at borders since 2000) 1/n

Parties debated this proposal on 21 November and it “sailed through”:

White-rumped shama proposal for inclusion on #CITES Appendix II sailed through with consensus! Now it’s time for implementation and regulation and to prevent further declines of one of the most beautiful and melodious birds. Congrats to Malaysia and Singapore for leading! pic.twitter.com/EZqffMDTul

As Monitor – a conservation organisation focused on lesser-known species – pointed out, the listing means that the monitoring and regulation of international trade in the species will be possible:

Inclusion of White-rumped Shama on @CITES App II ✅for collaborative regulation & monitoring of this heavily-traded #songbird. Now to ensure enforcement on the ground. For background, along with partners, we recommended App II listing in 2018 –> https://t.co/xHV7Mih6nW pic.twitter.com/BF88hiBihJ

The straw-headed bulbul proposal called for CITES to uplist the species from Appendix II to Appendix I. The latter provides the highest level of protection in international trade that CITES offers. This proposal also succeeded: 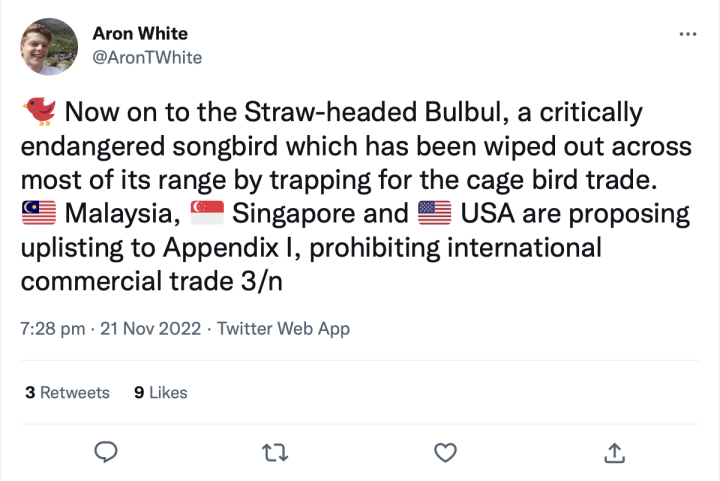 Several conservation groups supported the proposals. In both of them, Indonesia called for delays on the implementation of the listings. The country has a vast bird trade, despite many wild birds having protections from trade in theory.

As White indicated, the uplisting for the white-headed bulbul means that CITES should prohibit commercial international trade. However, it won’t stop international trade in captive-bred individuals. This is one of the loopholes in CITES that is ripe for abuse, risking wild individuals being exploited and trafficked through the captive-bred pipeline.

While these successes deserve celebration, they do point to other issues with CITES. These include the fact that parties don’t act fast enough to prevent declines in species. Arguably, for example, CITES should have provided higher protections to the straw-headed bulbul before it reached the cliff-edge of extinction.

In Asia particularly, he added, parties should work closely with the International Union for Conservation of Nature’s specialist group on the Asian songbird trade, to “better understand the issues, and the priorities”.

I have been researching the songbird trade since the 90s. Very sad to see so many species increasingly in decline but happy to see CITES now being used to help prevent the massive illegal and unsustainable trade! #wildlifetrade #cites #songbirds #conservation #birds

Critically, Shepherd also suggested that, with hundreds of songbird species threatened by trade, adding just a couple of new species to CITES listings at each conference doesn’t really cut it. Currently, CITES only lists around 60 species of songbirds. Shepherd said:

There should 50 or 60 songbird species being listed at this CoP and we’re struggling for two. My hope for the next CoP is that there are a lot more songbirds being listed in bigger groups.

should just be listed as a whole. Then if it can be proven that some don’t need to be listed, they can be downlisted. But until that time, they should all be listed.

Shepherd explained that without such wholesale listings, “loopholes will persist” and certain species will fail to recieve international protection.

In other words, CITES is taking baby steps during an extinction crisis that demands giant leaps. It needs to step up.