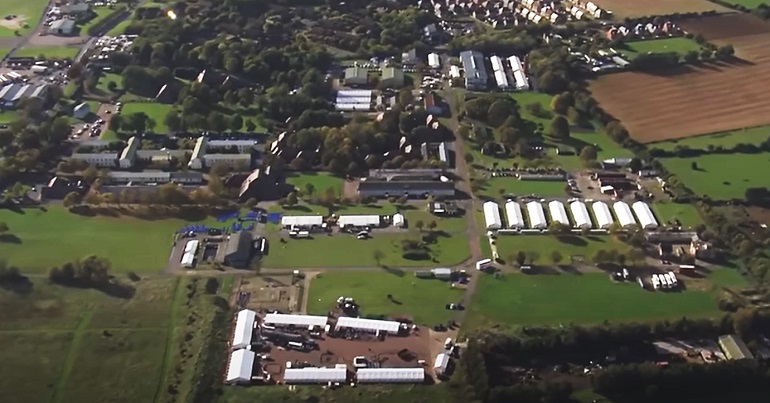 Manston refugee detention centre is now empty, according to news reports. Some people have welcomed the news, while others have cautioned that this is probably not the end of the far-right Home Office’s deadly hostile environment policy.

The Guardian has claimed that the Manston centre in Kent is now “completely empty”. It noted that:

Just a few weeks ago about 4,000 arrivals were placed there by the Home Office, almost three times the maximum 1,600 capacity of the tented site in Ramsgate.

Manston has, at best, been state-sanctioned imprisonment for refugees. At worst, it and the Home Office have caused a man’s death. As abolitionist group SOAS Detainee Support tweeted:

On Saturday 19th November it was reported that a man had died in the Manston detention camp. Since then, we have learned that he died after several days of being held captive in the massively overcrowded and unsanitary facility – forcibly deprived of access to medical care https://t.co/lTOstPpc7X

Manston, and the Home Office, have been dogged by further controversy – from outbreaks of diphtheria to horrendous overcrowding and conditions. As the Canary previously reported, Manston was only ever meant to hold people for 24 hours:

However, a prison watchdog warned that authorities are detaining people on the site for a much longer period, without beds, proper healthcare, or access to fresh air and exercise. The watchdog noted reports of cases of contagious diseases such as scabies, diphtheria and MRSA within the centre.

Now, it seems that the Home Office has moved all the detainees off site.

On Tuesday [22 November], Prime Minister Rishi Sunak’s spokesman said Manston is meant to be a temporary holding facility where people are moved on “often fairly quickly”.

So, it seems Downing Street may have intervened in home secretary Suella Braverman’s department. On social media, people have reacted cautiously to the news of Manston being empty.

Some people were calling for an independent investigation into Manston:

Was Manston another costly and mean stint of the UK Government to only cultivate hatred and divisions in our society at this critical time?

We need a full independent investigation into Manston before it is closed down for good.https://t.co/bEaHxXqmu2

If they could accommodate everyone this quickly anyway why did they wait so long and allow it to get so overcrowded in the first place, and where have they placed the people they have moved out of Manston. There are still serious questions to be asked herehttps://t.co/OXm93hNzwj

The Home Secretary has only taken steps to address her serious failures at Manston after our urgent legal challenge and widespread, public condemnation.

We are still concerned that the problems we saw at Manston are likely to be repeated.https://t.co/mH4EtVR7Bv

Questions also remain about where the refugees from Manston have gone. Previously, the Home Office dumped some of them in central London for hours with no support.

Unfortunately, Manston will not be the last time the UK government treats refugees appallingly. Sadly, the Home Office is likely to create another Manston (or force more people into it again) while claiming refugees are the problem – not it and its far-right policies.