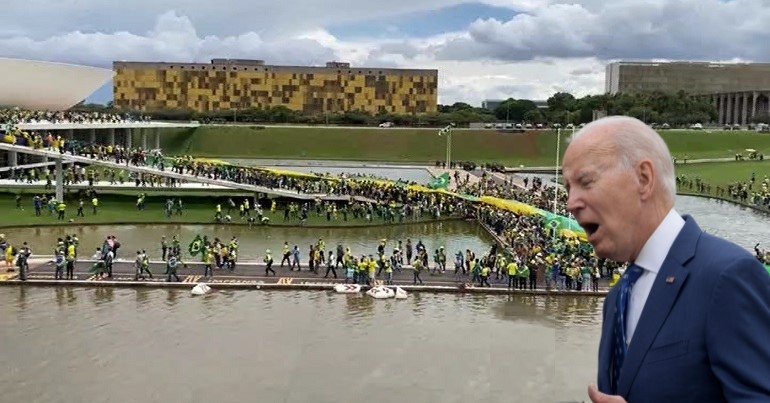 US president Joe Biden has condemned the far-right attacks on Brazil’s democratic centres of power. However, his words ring somewhat hollow and hypocritical while ex-Brazilian president Jair Bolsonaro – whose supporters were the ones doing the rioting – is currently residing in Florida.

As Agence France-Presse (AFP) reported, on Monday 9 January Brazilian security forces locked down the area around Congress, the presidential palace, and the Supreme Court. It came a day after supporters of Bolsonaro stormed the seat of power in riots that triggered an international outcry. In scenes reminiscent of the 6 January 2021 invasion of the US Capitol building by supporters of then-president Donald Trump, backers of Bolsonaro broke through police cordons and overran the seats of power in Brasilia, smashing windows and doors and ransacking offices. Initially overwhelmed security forces used tear gas, stun grenades, and water cannon to fight back the rioters until they finally subdued them:

However, images emerged on social media of police not taking the rioters too seriously at first:

This soon changed, as far-right fascists were seen attacking a police officer and their horse:

Eventually, police arrested around 300 people. However, as Al Jazeera wrote, there were still suspicions around the slowness to act from the police:

Bolsonaro’s supporters have been organising these attacks on their Telegram channels, and during the past week buses carrying hundreds of people have been arriving in Brasilia. So it came as a surprise that the security forces in Brasilia were so slow to act, and this has cast some doubts about their loyalties because the military police and the armed forces, in general, have been staunch supporters of Bolsonaro

These fascist fanatics have done something never before seen in this country’s history… We will find out who these vandals are, and they will be brought down with the full force of the law.

Without irony, far-right Bolsonaro condemned the “pillaging and invasions of public buildings” in a tweet. However, the politician rejected Lula’s claim he incited the attacks, and defended the right to “peaceful protests”. Then, enter the US president to give his verdict – while ignoring the fact Bolsonaro was holed-up in Florida.

AFP reported that Biden called the attacks “outrageous” to reporters. Further to this one word, he also tweeted that:

I condemn the assault on democracy and on the peaceful transfer of power in Brazil. Brazil’s democratic institutions have our full support and the will of the Brazilian people must not be undermined. I look forward to continuing to work with @LulaOficial.

Yet so far he has failed to address the fact Bolsonaro is currently in his country. As Reuters reported:

The far-right former Brazilian president flew to Florida two days before his term ended on Jan. 1… But Bolsonaro left behind a violent movement of election-denying supporters…

Members of Biden’s own party have critisised Bolsonaro’s presence in Florida:

Two years ago our Capitol was attacked by fanatics, now we are watching it happen in Brazil.

Solidarity with Lula and the Brazilian people.

Democracies around the world must stand united to condemn this attack on democracy.

Bolsonaro should not be given refuge in Florida.

Biden’s Twitter post was littered with people calling on him to deport Bolsonaro. As of 12pm on 9 January, the US president had not commented on the situation. It’s hypocritical at best that Biden condemned Brazil’s chaos while allowing the cause of the insurrection to casually hang out in Florida.