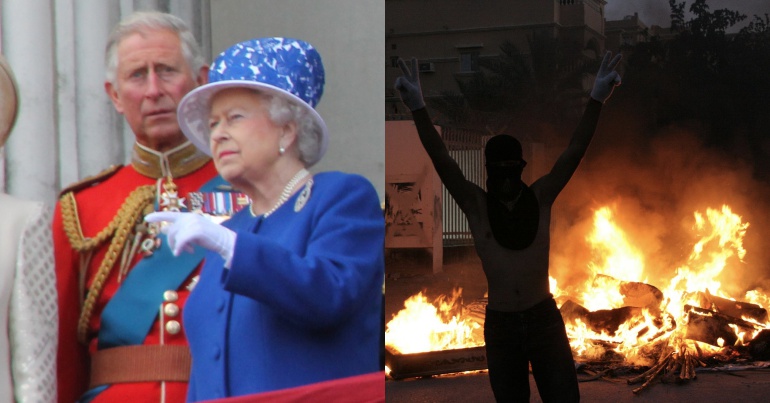 Pressure is mounting on the Queen and luxury brands to sever ties with the Bahraini-backed Royal Windsor Horse Show (RWHS). Rolex and Land Rover sponsor the lavish event attended by the Queen between 9 and 13 May. But a London-based rights group is crowdfunding to launch a major complaint. And critics have also asked why the Queen is cosying up to a country that is entrenched in a “full-blown human rights crisis”.

The Bahrain Institute for Rights and Democracy (BIRD) has launched a CrowdJustice campaign to fund a complaint to the Organisation for Economic Co-operation and Development (OECD). The OECD regulates the human rights impact of corporations. BIRD said:

For several years the Horse Show has provided a platform for the Bahrain royal family – guilty of violently suppressing pro-democracy protests at home – by inviting them as guests of honour; accepting their financial support; displaying Bahrain signage; and naming events after members of the Bahrain royal family, no questions asked. Photographs of the King of Bahrain sat alongside the Queen at the event are trumpeted both within and outside Bahrain as evidence of acceptance by the international community.

In a press release seen by The Canary, BIRD – which supports Bahraini victims of human rights abuses – explained this complaint. Firstly, presence at the RWHS helps Bahrain’s international image, whilst ignoring ongoing domestic human rights abuses. And Bahrain also quashed protests against the same event in 2017. Family members in Bahrain called protesters who planned to attend the show in the UK. They’d been arrested and were told to call their UK relatives to persuade them to call off protests.

The human rights abuses that were committed in the UK and Bahrain should demonstrate to the organisers of the Royal Windsor Horse Show, and their sponsors… that, by rolling out the red carpet for Kind Hamad, they are complicit in abuse.

The fact that these companies are continuing their affiliation with the Horse Show after these events calls into question their commitment to human rights. They must be held accountable for their complicity.

And human rights lawyer Daniel Carey, who is representing BIRD in the complaint, said:

If the organisers of sporting events choose to celebrate the head of a state with a terrible human rights track record, then it is not good enough to claim that sport transcends politics. Human rights abusing states are using set piece events to rehabilitate their reputations, even here in the UK, and companies need to respond to this. My client hopes that the OECD system will now recognise this.

Alwadaei said that the body in charge of the OECD is now “seeking responses from the companies linked to the show”. He said it’s “important that the issue has been acknowledged and is being taken more seriously”. However, it won’t prevent the show taking place, because the OECD deadline is 24 May. So sustained public interest and protests against the show are still vital. Because there is little international coverage of the human rights crisis in Bahrain.

According to Amnesty International: “Since June 2016, Bahrain has rapidly deteriorated into a full-blown human rights crisis.” Alongside Saudi Arabia, the UAE and Egypt, Bahrain has severed links with Qatar. And as part of its alliance with these countries, it has participated in the Saudi-led coalition’s bombing of Yemen. Alwadaei told The Canary that there is little support within Bahrain for the war against Yemen, but that anyone who voices opposition faces brutal treatment from the authorities.

According to Human Rights Watch, since 2016 Bahrain has seen:

Alwadaei confirmed that Bahraini families are targeted by authorities for protests that take place abroad. He told The Canary that, after his involvement in RWHS protests in 2017, members of his own family were arrested and tortured. But as Middle East Eye reported:

the UK government has done little or nothing to investigate reprisal attacks against people in Bahrain following protests mounted by exiled nationals in London.

A spokesperson for Jaguar Land Rover has defended its involvement, claiming it’s “a sporting occasion, with no political motives or political agenda”.

But Alwadaei and BIRD will keep the pressure on, because this is a highly political event. And it’s an event that the Queen and high-end brands should be utterly ashamed to attend.

– Support the BIRD crowd justice campaign, and help raise awareness of this event and the ongoing situation in Bahrain.