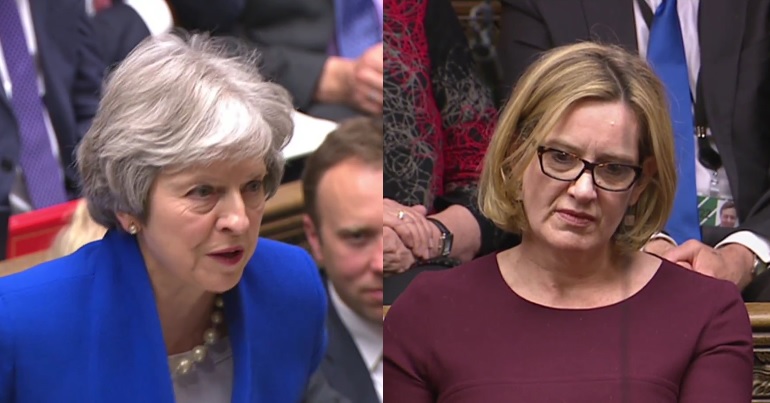 Theresa May had a vile love-in with ex-home secretary Amber Rudd at Prime Minster’s Questions (PMQs). But she really should’ve read the news before doing so. Because at PMQs, she praised Rudd for her work on tackling domestic violence. Reports have just emerged, however, showing that the “hostile environment” these two female politicians have implemented is making the problem worse for women.

The recently resigned home secretary asked a question at PMQs. Or rather, Rudd made a statement thanking the security and emergency services for their efforts during terrorist attacks.

That statement may help people to remember her as something other than just the woman who screwed the Windrush generation. Because Rudd’s tribute prompted May (spontaneously, we’re sure) to praise her on the same issue. The prime minister commended Rudd on “the work she did following the terrorist attacks last year” to make sure those services get the support they need.

May also complimented Rudd on other elements of her performance:

I’m pleased to be able to have this opportunity to pay tribute to her and the work that she did as home secretary. She… did valuable work across all elements of the Home Office, …including issues like modern slavery and domestic violence.

But women’s groups have just challenged May’s claim about Rudd’s record on domestic violence. Because they’ve warned that abusive men are using the government’s “hostile environment” – conceived by May herself and embraced wholeheartedly under Rudd – to control their partners.

As The Guardian reports, groups including Southall Black Sisters, Latin American Women’s Rights Service, and the End Violence Against Women Coalition (Evaw) have given the warning. Rachel Krys, co-director of Evaw, said:

The public are rightly outraged by the devastating impact the hostile environment immigration policy has had on the lives of the Windrush generation. The same policy is also leaving many women at risk of violence and exploitation, scaring them away from seeking help and making it harder for them to access life-saving services.

Abusers are weaponising the policy, using that fear, saying, ‘if you leave me, if you go for help, if you draw attention to yourself, you will be deported’.

And the government’s “hostile environment” policy has proven to be the perfect weapon for abusers in migrant communities. Because it isn’t an empty threat for them to use against their partners. Krys explained:

In one case a woman had gone to the police to report a rape and the first people they called were immigration officers. We’ve had another case… where a woman at risk of violence was deported.

So Rudd’s “valuable” work at the Home Office, and May’s before her, has proven dangerous for migrant women. Because, as these groups say, government policy is making many of them “so fearful of deportation” that they’re not seeking help.

Meanwhile, extensive government cuts have left women who do seek help with nowhere to go. As The Bureau of Investigative Journalism reported in 2017, refuges turned away over 1,000 vulnerable women and children in a six-month period; because refuges say they now only have a “bare-bones service”.

Two women on average die each week in England and Wales due to domestic violence. Clearly, government policy is doing nothing to lessen the risk. In fact, it’s making it worse. Yet May congratulated Rudd on a job well done.

These two women truly have no shame.