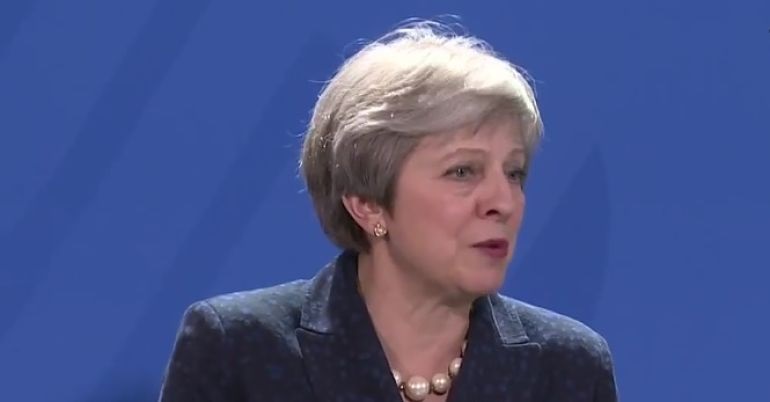 A racism scandal blew up in Theresa May’s face as parliament broke for summer. Or to be more accurate, a racism scandal should have blown up in her face; but British media outlets have barely raised a peep about it.

The scandal surrounds a written question about Israel’s new ‘apartheid‘ law. An MP effectively asked the government what action it planned to take against the law. And its reply was nothing short of scandalous.

Israel passed a controversial new ‘nation-state law’ on 19 July. As The Canary wrote at the time:

The legislation strips away the “official language” status of Arabic, names occupied Jerusalem as the undivided capital of Israel, and says “Israel is the historic homeland of the Jewish people and they have an exclusive right to national self-determination in it”.

The country, however, has around 1.8 million Palestinian people in it. So many critics have labelled it “racist“, as it makes these people into second-class citizens. And Palestinian negotiator Saeb Erekat said it “officially legalizes apartheid” in the country.

But the UK government is not among the critics of this “racist” law. Quite the opposite, in fact.

Here is UK govt accepting Israel's Nation State law (de facto apartheid) that gives only Jews the right to self-determination: "Israel's long standing commitment to equality for all its citizens is one of its great strengths as a fellow democracy". https://t.co/YyEHOK8M29 pic.twitter.com/wH516ya27z

Labour’s Richard Burden asked the government what it has said to Israel about the law and the implications it will have for minority groups in the country. Foreign Office and international development minister Alistair Burt responded. He wrote:

As part of their regular diplomatic work with Israeli authorities and legislators, British diplomats in Israel discussed the (Nation-State Bill) alongside other legislation and developments. Israel’s long standing commitment to equality for all its citizens is one of its great strengths as a fellow democracy. As friends of Israel we would be concerned about any development that would undermine this commitment

The government appears to be saying that Israel’s introduction of a law that denies self-determination for non-Jewish people shows its “long standing commitment to equality for all its citizens”. Because it apparently isn’t “concerned” that this law undermines that “commitment”.

In reality, the law shows the exact opposite of that. It shows Israel is not committed to equality for non-Jewish citizens.

1984 called. It wants its dystopian hell back.

Burt prefaced his statement by pointing out that Israel didn’t include one clause in its bill that “would have explicitly allowed a community composed of people of the same faith or nationality to maintain an exclusive community”.

And Burt is correct. The Israeli government didn’t give itself the right to drive Palestinians out of the country in its new law. That would have been political and legal suicide. But it has given itself the “exclusive” right to self-determination, meaning it’s declared that Palestinian people have no such right.

Yet the British government says this racist law, from an Israeli state that’s responsible for a more than 50-year-long occupation of Palestine, doesn’t take away its apparent status of “fellow democracy”.

George Orwell, who produced the now inappropriately named 1984, once wrote that:

Political language… is designed to make lies sound truthful and murder respectable, and to give an appearance of solidarity to pure wind

This scandalous doublespeak from Burt is exactly the sort language Orwell was talking about.

– Also see previous Canary articles on Israel. And join us, so we can keep holding the powerful to account.