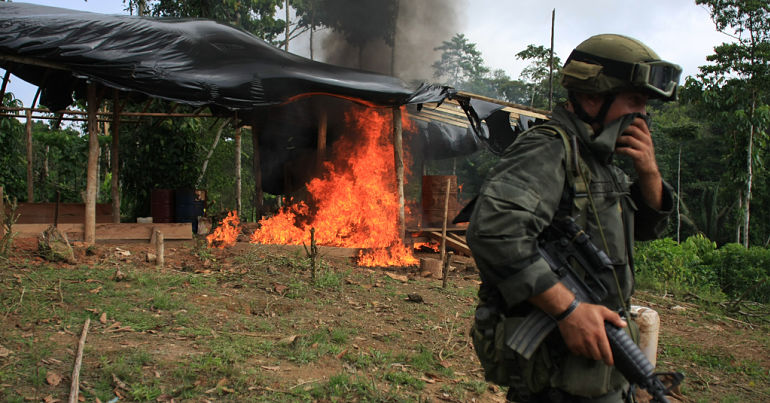 For roughly two decades, cocaine production in Colombia has increased alongside major increases in US counter-narcotics assistance. In 2017, for example, Colombia was producing three times more cocaine than it was four years previously – a record high.

In short, the US ‘war on drugs’ in Colombia is clearly not achieving its stated goals. And according to a recent report from the US Government Accountability Office (GAO), Washington has no idea why.

The GAO’s report “was undertaken because of the obvious mismatch between the continuing anti-cocaine spending and the fact that cocaine production” in Colombia kept increasing.

After looking into three parts of Washington’s approach to the war on drugs (eradication, interdiction/prohibition, and alternative development), it concluded that:

without information about the relative benefits and limitations of these activities, the US government lacks key information to determine the most effective combination of counternarcotics activities

In other words, the US government seems to have no idea why its war on drugs is failing.

Buried in the same report, however, were remarks from US officials about the country’s approach to drug eradication. “Using eradication as a supply-reduction strategy amounts to ‘mowing the grass’,” said one official; “it represents a short-term approach to reducing the coca crop”. And while this is true, the problem with the US approach to the war on drugs goes even deeper than this.

Policy-makers in the US have long been aware that focusing efforts on drug-producing countries is the least effective way of dealing with domestic drug issues. In 1994, a landmark RAND corporation report – sponsored by the US army and the Office of National Drug Control Policy – found that funds invested in domestic drug treatment “were 23 times as effective as ‘source country control’”. Evidence-based drug policy in Portugal, meanwhile, has since supported these findings.

Why, then, has the US continued to terrorise Colombia with counter-insurgency warfare, support for paramilitary groups, and likely cancer-causing aerial fumigation policies?

The ‘war on drugs’: not about drugs

There’s a very convincing reason why the US didn’t bother to analyse the effectiveness of its drug war in Colombia properly: it’s never been about drugs.

When Colombia became Washington’s third largest recipient of military assistance in 1999 (after Israel and Egypt), the Colombian military was one of the world’s worst abusers of human rights. This sits within a general trend of US military involvement in Latin America – which, according to Noam Chomsky, suggests that “the more foreign policy aid given [by the US], the more brutal and less democratic the police institutions and their governments become”.

In the same vein, US counter-narcotics assistance to Colombia sponsored the destruction of Colombian social organisations deemed threatening to US economic and strategic interests. After the events of 11 September 2001, the George W. Bush administration formalised this relationship by requesting US$98m to fund a Colombian counterinsurgency brigade to protect US corporation Occidental Petroleum’s oil infrastructure.

Washington’s ‘war on drugs’ has been a failure. But since it began in Colombia, the latter has further opened its natural-resource industry to foreign investment, adopted a wide range of neoliberal policies, and remains a vital oil producer for US markets.

Ultimately, then, the US may very much see the ‘war on drugs’ in Colombia as a success.