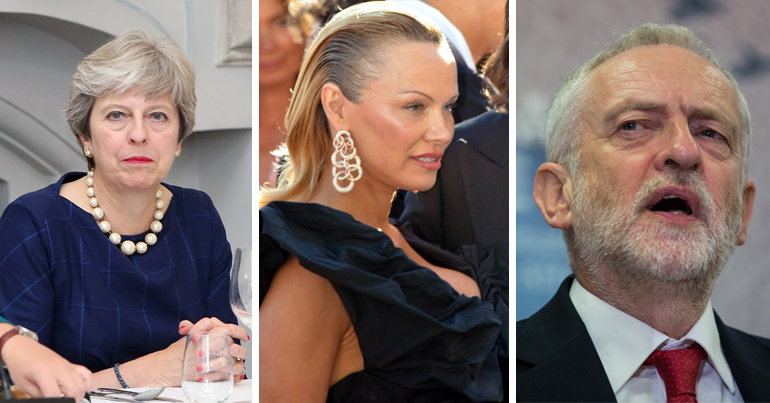 Pamela Anderson’s politics gained widespread exposure when she tweeted positively about the gilets jaunes (yellow vests) protests in France. But this wasn’t the limit of her insight on political matters, as a new interview with Jacobin magazine reveals.

Corbyn, May and Brexit

Jacobin carried out its interview with Anderson alongside philosopher Srećko Horvat. Together they tackle topics including climate change, European politics and the responsibilities of privilege. The interview also directly explores questions about Corbyn, May and Brexit.

The magazine asks Anderson about a recent tweet in which she voiced support for ‘Lexit‘, or a left-wing exit from the EU. Anderson says she believes the EU needs to be “fundamentally reformed” but without “nationalistic tendencies”. And she goes on to say May’s recent bungle getting out of a car was “the best metaphor” for the prime minister’s poor handling of Brexit. After joking that her experience handling talks with Hollywood would stand her in good stead in talks with the EU, she says:

… the solution is not a second referendum, but a general election. And I hope Jeremy Corbyn will be the next prime minister.

Calls for a general election from the left have been growing in recent weeks. Some believe this will be the best way out of our current Brexit chaos. Anderson echoes this view in a more detailed article posted on her website.

In Brexit and I, she criticises “[the] Guardian, the metropolitan elites and the likes” for promoting a view of the EU as a “humanitarian charity” for “unquestionable good”. She also criticises vocal Leave figures for having “lied through their teeth” and scapegoated people from outside the UK. As a result, she believes that Corbyn could negotiate a better deal for the UK’s exit from the EU. An exit, she says, that would work “jointly towards the best solution for the people in the country”. And one that she believes could even see the UK lead in creating an alternative to the EU for Europe.

Returning to her views on France’s protests, Anderson cuts through the idea that the gilets jaunes go against the environment. The protests were sparked after president Emmanuel Macron announced a fuel tax hike, saying it would encourage people to buy cars that are less polluting. But, as Anderson points out:

As a result, she says, the tax hike is “the poor paying” while “the rich keep destroying the planet”. In another article on her website, Revolt! Don’t React, Anderson expands on this. Recognising the deep structural problems around the world that have led to actions many middle-class elites don’t understand, she says:

I look around and in so many countries I see one common denominator. A revolt of the periphery. From the election of Trump as president, to Brexit, Catalonia, the Yellow Vests… and I wonder if it is because capitalism at the periphery is always more drastic, more cruel.

In the Jacobin interview, she repeats the question from the 3 December tweets about “what comes the day after” the gilets jaunes riots. And, connecting it to other important issues such as Brexit, Anderson asks:

can the progressives in France, and all over the world, use this energy so that instead of violence we see equal and egalitarian societies being built?

Anderson’s high profile voice elevating a genuine left-wing – at times even revolutionary – point of view is refreshing and welcome. This is something she recognises in the Jacobin interview. Asked about the responsibility of having a public platform, Anderson says that coming to fame through Baywatch gave her:

the privilege and opportunity to raise my voice for the many issues I believe in. … I have the responsibility to speak about these issues. Everyone has.

Although it’d be easy to dismiss Anderson as a celebrity sticking her nose in, that’d be a shame. Her views show a clear understanding of not only global politics but the daily realities faced by many working and ‘under’ class people. WE all need to speak out against and fight capitalism. But as co-interviewee Horvat said, we’d be silly not to embrace Anderson’s platform and voice.