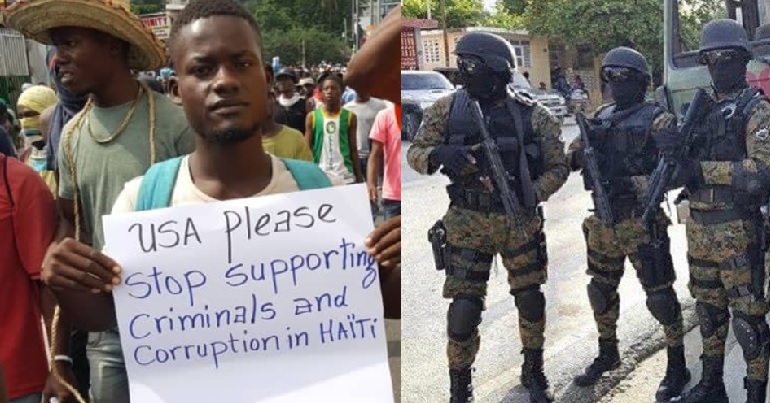 In recent weeks and months, people in Haiti have been sharing horrifying videos over social media and WhatsApp. Videos from the Port-au-Prince neighborhood of La Saline reportedly show numerous killings at the hands of paramilitary and state-backed groups between 11 and 13 November. One local human rights group has claimed 59 people have been killed, while some local residents and opposition politicians claim an even higher death toll.

Because Washington backs the current Haitian government, however, you won’t have heard too much about this in the mainstream media.

A history of resistance and repression

A seaside community, La Saline has long been a hotbed of resistance to the country’s right-wing politicians. In 1957, Haitian military forces attacked the neighborhood’s residents because it had supported leftist leader Daniel Fignolé. On 11 September 1987, paramilitary and army forces conducted a massacre of churchgoers in La Saline opposed to the right-wing ‘neo-Duvalierists’ in power. The neighborhood was also targeted consistently under the coup regimes of Raoul Cédras (1991-1994) and Gérard Latortue (2004-2006). The latter led to over a decade of UN occupation. And in late 2016, when government forces attacked demonstrators with tear gas in the community, three babies reportedly suffocated to death.

La Saline is the location of the ruins of St. John Bosco, the parish of former progressive president Jean-Bertrand Aristide. An ex-priest, he was twice overthrown: first in a CIA-backed coup in 1991, and then by a US-backed coup in 2004 – both events resulting in the deaths of thousands of people. The parish is well known as the site of the 1987 massacre; and for years, its ruins have served as the starting point for protests that then wind around the capital, with countless people then coming out from Delmas, Cite Soleil, Bèl Air and other neighborhoods.

The Haiti Information Project has been documenting the most recent violence:

#Haiti's police just attacked the protests once again! People are scattering trying to get away from teargas and gunfire. They sing continue to sing for the president's resignation as they flee. pic.twitter.com/4p0ZgKsFvk

The latest round of violence began on 17 October when police allegedly killed protesters. And police continued throughout the month to intensify intimidation tactics against protesters:

On 31 October, a funeral for murdered protesters took place in the Port-au-Prince popular neighborhood of Bèl Air. Police reportedly opened fire, leading to a new round of state killings and protests. And mourners in the funeral were briefly trapped.

Protesters responded by blocking major intersections in the neighborhood of Bèl Air.

The state, on the other hand, has responded to the protests with brutal force, mobilizing new fast-reaction forces which allegedly include a mercenary contingent. As I have documented in extensive detail, right-wing paramilitary groups were directly inserted into the country’s police force after the US-backed coup in 2004. Predictably, the country’s police force has since become a hotbed for right-wing thugs:

Police have reportedly targeted students protesting against the government’s lack of funding for education, assassinating a student leader in the process.

The massacre of La Saline

The state-backed killings reached a fever pitch between 11 and 13 November with the ‘massacre of La Saline’. Locals claimed 60-100 people were killed. One human rights report found that 59 people were tortured and murdered, two had gone missing, seven women had been raped, and five people injured. It added that:

One hundred and fifty (150) houses were searched, vandalized, riddled with bullets or burned.

According to an activist with many contacts on the ground, the violence was spearheaded by government-backed gunmen wearing BOID (Brigade d’opération et d’intervention départementale) police uniforms and driving around in new vehicles. It continued:

In addition, some of the known members of the Base Nan Chabon gang led by Serge Alectis — widely known as Ti Junior — were in the same mercenary soup wearing the uniforms.

Drive-by shootings on residents by pro-government gangs in the neighborhood have continued, while state officials have claimed that security forces are fighting gangs.

With grizzly images of the massacre spreading over social media, between 18 and 20 November, large–scale anti-government protests spread to Cap Haitien, Jeremie, St. Marc, and Hinche, with barricades going up in Jakmel and many other towns, and with a general strike underway.

Don’t let black smoke fool you. This is a peaceful protest. pic.twitter.com/fqkDCPxFK3

On 21 November, meanwhile, a group of protesters on the Route de Aeroport in Port-au-Prince were reportedly run over by a car with state license plates.

Protesters have coalesced around an anti-corruption campaign and demands for government leaders to step down and be held accountable for their crimes.

After months of grassroots demonstrating, a campaign began online calling attention to the stealing of funds that the Haitian government had acquired through the PetroCaribe deal set up by Venezuela’s government to help the people of Haiti. In addition to government graft, corruption has also been rife among the NGOs that collected so many funds following the devastating 2010 earthquake.

Haiti’s right-wing PHTK (Tèt Kale) government, headed by President Jovenel Moïse, came to office under controversial elections, with allegations of mass voter suppression. Only 18% of voters participated in the election, which appears to be one of lowest turnouts (if not the lowest) of any presidential election around the world over recent years. It now faces a crisis of legitimacy.

[NOTE: Moïse’s election in 2016 and that of his ally and predecessor Michel Martelly in 2011 contrast significantly with the pre-earthquake elections of the two decades prior when 50-60% of the electorate regularly turned out for presidential elections.]

With anti-corruption protests growing in recent months, the state crackdown has reportedly been brutal, with some predicting renewed political turmoil over the coming year.

Many teachers across the country, for example, have not been paid for long periods of time. Meanwhile, police have reportedly assaulted journalists covering the recent protests. Lawyers are also on strike, protesting police violence, and taxi and moto-taxi drivers have joined in solidarity as well. The government faces growing anger, with complaints also growing over backed-up sewage and garbage systems.

Victims of the recent state violence have reported that the attacks have had clear political motivations in targeting neighborhoods that are bases of support for opponents of the PHTK government (which has close relations with Washington and the UN).

In the wake of the most recent state violence, Trump’s US embassy in Port-au-Prince lauded the “professionalism” of Haiti’s police, sending former Clinton-appointed ambassador Kenneth Merten to advise the Haitian government. In short, when it comes to containing Haiti’s disenfranchised citizens, Washington’s bipartisan foreign policy consensus is at its most unshakable.

This young Haitian has a message for the #USA! Please stop supporting criminals in #Haiti. They want a change. They want a future. They want to live in #dignity. #LetHaitiLive #FreeHaiti #imperialism pic.twitter.com/l2rFT2WYOE

Finally, after weeks of violence, Amnesty International released a vague statement calling on Haiti’s authorities to avoid the “excessive use of force”. While a few small press outlets have reported on the attacks, the media inside Haiti is overwhelmingly dominated by powerful business interests. And the international media has also faced accusations of turning a blind eye to what’s been going on in Haiti.

The situation is desperate. The new ‘earthquake money’ that has poured into the country hasn’t found its way into the pockets of the people who need it. A large part of the population is structurally marginalized, and they don’t see the government investing in social programs or education. Police brutality, meanwhile, has become commonplace, including within the country’s prisons; and at the same time, Haiti faces a renewed orphan issue in its capital that reflects the state’s failure to invest in social infrastructure.

Numbers of orphaned street kids in #Haiti's capital are growing. Scene is unfortunately becoming more common place. Solution of #PHTK ruling party is to lock them up claiming there's no money to feed, care & educate them. Of course there's no money for them when YOU steal it. pic.twitter.com/ULr5CwKCS9

As I explained recently in an interview with RT: in the wake of the 2004 coup and the 2010 earthquake, US and UN officials and various local and international elites have sought to politically and economically remake the country into a stable platform for transnational companies. This has involved the sidelining of grassroots political actors and the remaking of a paramilitary apparatus, but one that acts in a more flexible and rapid manner. And this is a strategy that we now see murderously playing out.