No wonder they are pointing at Corbyn. The PM just treated parliament with pure contempt, yet again. - The Canary 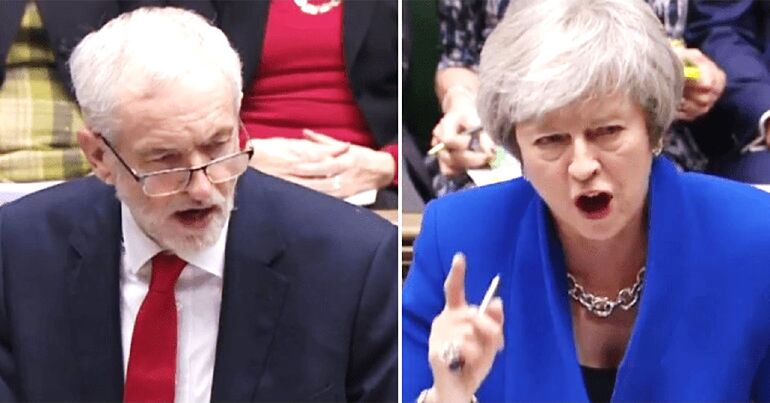 No wonder the Conservatives and corporate media are pointing at Jeremy Corbyn. At prime minister’s questions (PMQs), Theresa May treated parliament with pure contempt, yet again.

The UK has legislated to leave the EU on 29 March. But May refused to confirm that the parliamentary vote on her Brexit deal will go ahead in the third week of January.

Meanwhile, the establishment has embarked on wall-to-wall discussions about whether Corbyn called May a “stupid woman” in the Commons. The Labour leader returned to the commons chamber to confirm he’d muttered “stupid people”, after the Conservatives had, in Corbyn’s words, turned “a debate about the national crisis facing our country into a pantomime”.

The international trade secretary said, and I quote, ‘I think that it is very difficult to support the deal if we don’t get changes to the backstop. I’m not even sure if the cabinet will agree for it to be put to the House of Commons’.

So can the prime minister give us a cast iron guarantee the vote in this house will not be delayed yet again?

But May refused to guarantee that the vote will happen:

Jeremy Corbyn "Can the PM give us a cast iron guarantee the vote in this house will not be delayed yet again?"

Theresa May says "every member of this house" has a responsibility to deliver on #Brexit vote#PMQs updates: https://t.co/ycqYsPmKVk pic.twitter.com/URpRaAFaee

The lack of a guarantee comes after May’s government has sidelined parliament time and time again:

And now May won’t confirm any details about when the vote on her deal will go ahead. At the same time, the Conservative government is now officially preparing for ‘no-deal’ (or a minimal arrangements deal). Critics such as Labour chair Ian Lavery have accused May of “holding the UK and parliament to ransom” with the prospect. And Conservative MP Anna Soubry agreed, accusing May of “blackmail”. In a similar vein, Corbyn said at PMQs that:

The reality is that the prime minister is stalling for time.

May’s minority administration has tried to govern through executive rule through the whole Brexit process. Now she is pushing a vote on her Brexit deal back to increase the threat of leaving the EU without a proper deal. As Corbyn pointed out, May is brazenly playing politics with the future of the UK.