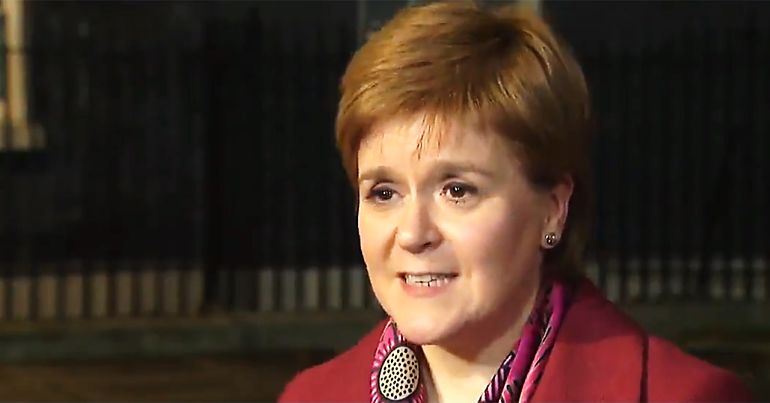 On 19 December, Scottish first minister Nicola Sturgeon met with Theresa May. The meeting took place at 10 Downing Street to discuss Brexit and the UK government’s immigration white paper. Afterwards, Sturgeon took questions from the media and she didn’t hold back.

The first minister claimed the UK government’s plans were “an act of vandalism on the Scottish economy and public services”. Sturgeon also said reducing EU migration by 85% would “send Scotland’s population into decline”.

Sturgeon raised these concerns with the prime minister during their meeting.

The governments immigration proposal is 'an act of vandalism on the Scottish economy' – First minister @NicolaSturgeon blasts the Theresa May's immigration plan post-Brexit.

“An act of vandalism”

The SNP leader took to Twitter prior to meeting with May, to set out those concerns and restate the benefits of immigration:

2/ @scotgov modelling shows that a 50% reduction in EU migration will send our working age population into decline. The estimate in this paper is that the UKG proposals could reduce EU/EEA migration to Scotland by 85%. That will devastate our economy and care sector.

4/ these proposals, if they go ahead, like Brexit generally, will diminish the UK in so many ways. But it doesn’t have to be that way – Scotland can choose a better future.

The First Minister @NicolaSturgeon is right to highlight both the negative effect of pandering to anti-migrant sentiment & the need for a separate Scottish approach. The STUC supports additional powers on migration for the Scottish Parliament https://t.co/eWbepIQGka

The Federation of Small Businesses Scotland condemned the white paper:

The end of freedom of movement

The home secretary Sajid Javid announced the immigration white paper’s proposals on 19 December. It boasts the “end to free movement” as well as a new single “skills-based immigration system”.

Javid said at the launch of the white paper:

Today’s proposals are the biggest change to our immigration system in a generation. We are taking a skills-based approach to ensure we can attract the brightest and best migrants to the UK. These measures will boost our economy and benefit the British people.

But the first minister of Scotland clearly disagrees with the home secretary. Perhaps a ‘one size fits all’ UK immigration policy just doesn’t work. Or perhaps the Conservatives are using Brexit to act out their “obsession” over immigration.

Scotland has specific and different requirements in relation to immigration. As reported by the Ferret in February 2018, population decline has been a significant concern for successive Scottish governments. Scotland’s population hit a low of 5.06 million in 2000 but has now increased to a 5.4 million. 86% of this population growth is down to immigration alone.

The immigration proposals include a minimum salary threshold of £30,000 for people wishing to move to the UK. But this has caused further division within May’s cabinet.

The Trades Union Congress (TUC) has also criticised this proposal and highlighted the impact this could have a vital public services:

The govt is considering a £30k pay threshold for 'skilled' EU workers. We think every public sector worker is skilled. They all need a pay rise.

Sturgeon has also been clear about the impacts of proposals like this on Scotland’s economy and public services. She proposes a Scotland-specific visa that would ignore the £30,000 threshold. This would allow people working in lower-paid sectors such as tourism, care and hospitality to move to the country.

Twitter reacted with pride as Sturgeon talked positively about immigration.

Am proud to live in a Scotland where political leaders say things like this https://t.co/K1wGStDXeq

no problems, please move to Scotland and she will be your First Minister, love from the Scottish people

Adele Weaver suggests she might make the move to Scotland:

I think you might get an influx of English people – seems like the only sane, progressive place at the moment – can I come?

And a Scottish independence supporter thinks it’s time for Scotland to “escape the mess”:

Time to call it ?
I don’t like this uk now.
I really want Scotland to escape the mess.

It’s clear Sturgeon is standing up for what’s best for Scotland. If immigration was to reduce, it could be catastrophic for Scotland’s workforce. The first minister defends the need for free movement and talks about the cultural benefits of immigration. But the UK government seems hell-bent on using Brexit as a way to exercise its obsession over controlled immigration. An obsession that could be damaging to Scotland.

This is just one of the many reasons why Scotland is at a detriment remaining part of this Disunited Kingdom.