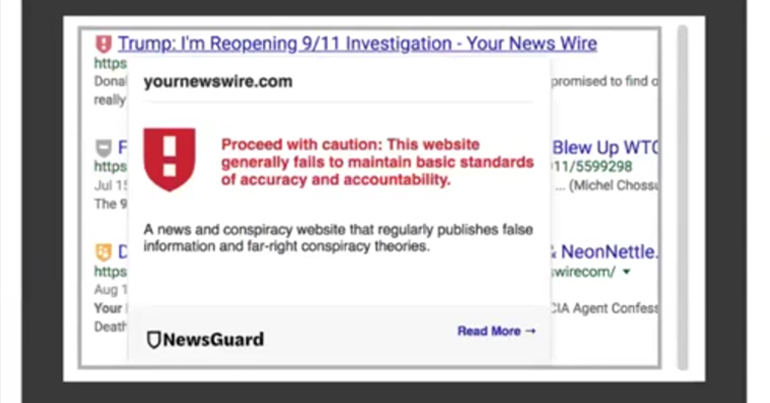 Microsoft recently introduced a new feature to some of its Edge browser users, supposedly to help users spot ‘fake news’. It has teamed up with NewsGuard Technologies, which claims to “fight false news, misinformation, and disinformation”, integrating the app’s ratings directly into Edge. But independent publisher WikiLeaks and many other commentators are raising serious concerns over the people and agenda behind NewsGuard.

NewsGuard rates websites. It gives a red or green mark, showing trustworthiness, according to “9 specific criteria”. The decision-makers, the company says, are a “team of trained journalists and experienced editors… humans, not algorithms”. Plugins are available on all major browsers.

At the start of January, Microsoft made NewsGuard a default part of its Edge browser on iOS and Android platforms. Previously, the computer company said the move was part of its ‘Defending Democracy Program’. NewsGuard would “empower voters” by making news websites more transparent.

Stacey Aldrich, a senior librarian in Hawaii’s state library system, gave similar reasons. In December 2018, Hawaii was the first US state to install NewsGuard on computers across all of its 51 libraries. She told a local paper that “this service… continues the long tradition of librarians arming readers with more information about what they are reading”.

But not everyone believes this.

What a red mark really means

WikiLeaks, for instance, has described NewsGuard as a “neocon app” pushing “news imperialism”:

It pointed to people on NewsGuard’s advisory board as an example. Senior staffers from the Obama, George W Bush and Clinton administrations are present, including former CIA director Michael Hayden.

WikiLeaks then compared its own red NewsGuard rating with that of Fox News‘s green rating, before linking to a 2011 tweet by NewsGuard co-founder Gordon Crovitz:

Why prosecuting Julian Assange under the Espionage Act would protect the free flow of information, http://on.wsj.com/fF5FNt

But WikiLeaks isn’t the first to raise concerns about NewsGuard’s agenda. On 9 January, MintPress News published an extensive exposé of NewsGuard’s inner workings, including its own experiences with the app:

MintPress was informed that it was under review by an organization called Newsguard Technologies… and asked [editor-in-chief] Muhawesh to comment on a series of allegations, several of which were blatantly untrue.

It raised several areas of concern regarding NewsGuard’s operation. A poll promoted by the news rating agency is one such area. NewsGuard claims a recent Gallup study shows 89% of social media users want the app’s ratings integrated directly into the website. But as MintPress pointed out, NewsGuard itself funded the poll along with its own investor, the Knight Foundation. Meanwhile, technology website Wired showed the method used to gain results only had 706 respondents. As a result, Gallup itself had to say that the results “may not be reflective of attitudes of the broader US adult population”.

This, of course, isn’t a fact that appears in NewsGuard’s press release.

Hilarious. @NewsGuardRating approached me and @boingboing in a manner that raised red flags, so we declined to participate in their scheme. They gave a 30-years-and-counting independent internet institution this failing grade. Here’s my response🖕😊 who made you the truth squad? pic.twitter.com/SrQJVvBsPr

As Wired noted, the effect of not responding to questions was for NewsGuard to describe Boing Boing as having “failed to meet several of its criteria”.

While NewsGuard is handing red marks out to sites that refuse to co-operate, MintPress pointed out that the company has given green marks to mainstream outlets known to have published false news stories, including CNN, Fox News, and the Washington Post.

On the surface, this decision doesn’t appear to make sense. But MintPress suggested that the underlying logic of the app is “to serve the interests of American oligarchy”. In this way, NewsGuard rewards news that promotes the US state’s line and demotes those that might question it. Independent media, in particular, is at risk.

MintPress isn’t the only one to have made this claim. Award-winning journalist Max Blumenthal, independent journalist Caitlin Johnstone, and freelance reporter Jonathan Cook have all made similar comments

These claims become more ominous when looking at BrandGuard, NewsGuard’s sister project. The launch press release said BrandGuard is a “brand safety tool aimed at helping advertisers keep their brands off of unreliable news and information sites”. This service allows advertisers to buy NewsGuard’s ratings database. Crovitz said this meant “an advertiser can, for example, choose not to serve ads on sites that regularly publish false or unreliable content”. In other words, it aims to choke off revenue to sites marked red.

Because of its direct connection to Google through investor Publicis Groupe, MintPress said BrandGuard could offer Google:

just the excuse it needs to cut off sites like MintPress, and other pages equally critical of empire, altogether.

Nip it in the bud

The Hawaii example is just a taste of what NewsGuard aims to do. When it launched, NewsGuard’s press release said it would provide its ratings for “for free to news literacy groups, school and university systems” throughout the US. The latest information suggests it has already made deals with libraries in five states.

NewsGuard passes itself off as a neutral third party, simply letting web users know what is and isn’t ‘fake news’. But the calibre of those involved, as well as its actions to date, suggest an agenda that threatens websites willing to question the US government. Given how far the app has already spread – and how much further it hopes to grow – we must question NewsGuard’s agenda right now.