Apparently, Brexit is a chance to 'enhance our lethality'. No, really. - The Canary 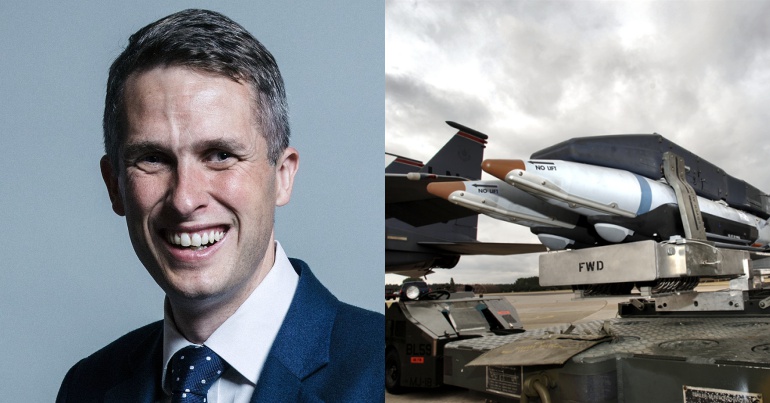 On 11 February, defence secretary Gavin Williamson gave a speech to the Royal United Services Institute (RUSI), a key defence and security thinktank. It was truly terrifying. He suggested a huge rise in arms and defence investment alongside greater UK global interventionism. And he also said that Brexit is the perfect opportunity for the UK to “enhance our lethality”.

In a speech called Transforming UK Defence to Meet the Global Threats of Tomorrow, Williamson started out by asking the “important” question: “why do we fight?”. Apparently, it’s to “protect our people”. But that depends, of course, on who he means by ‘our people’.

His speech foregrounded a “multi-million-pound Transformation Fund” for increased UK defence spending. According to Williamson, the fund is in addition to the “extra” £1.8bn the Conservative government has invested. It includes £33m to counter “the threat from the Kremlin”. There’s also an additional £100m “to modernise how we do business in defence”. And he continued, “if this isn’t enough”, there’s another £24m “available through innovative Spearhead projects”. These projects are known to include companies such as Italian-owned Leonardo. This is the world’s 9th largest arms company, that’s sold “helicopters to Algeria, Libya and Turkey“.

But it’s difficult to understand these figures, or what protection there is for ‘our people’ from a government that’s slashed NHS funding for nine years; the same government whose austerity policies have pushed thousands of people further into poverty as an intentional “political choice”.

As Andrew Smith from Campaign Against Arms Trade said in a press release:

At a time when budgets are being squeezed and cut across the country, and when millions are being hit by austerity, the Government is finding even more money for the military.

As Williamson boasted, Britain is:

These UK arms sales to Saudi Arabia, Yemen, Israel and Turkey kill innocent women, children and men every day. In 2017 alone, “the UK won defence orders” worth £9bn. This was a 53% increase on the previous year.

Smith agreed that “Williamson rightly condemns those that flout and ignore international law”. But as he also stressed:

the Government is arming and supporting Saudi forces widely accused of violating international humanitarian law in atrocities against Yemen.

Williamson used the word “lethality” five times in his speech. Despite Donald Trump‘s continued threat to global security and the current coup attempt in Venezuela, Williamson claims the UK’s committed to:

Enhancing the reach and lethality of our forces and reinforcing the fact that the United States remains our very closest of partners. We share the same vision of the world. A world shaped by individual liberty, the rule of law and, of course, the tolerance of others.

And as the UK remains in Brexit deadlock, Williamson thinks this is a “great moment in our history”. He continued:

A moment when we must strengthen our global presence, enhance our lethality, and increase our mass.

Williamson scattered his speech with references to increased UK global intervention. From China to the Middle East, and from Ukraine to the South Pacific – nowhere, it seems, is safe. But as Smith insisted:

With the UK at a crossroads, the Government should redefine its role, but that should mean an end to interventionism and the focus on projecting military strength around the world – not more of the same failed policies that have done so much damage.

Williamson’s speech was chilling. And Smith calls for a “different view on security”, saying:

Where the UK, and other rich nations, can make a positive difference is through overseas aid, supporting civilian peace-building efforts, and investing in renewable energy and green technologies to combat climate change, which is the number one threat to our security and that of the world.

Williamson’s speech truly upped the warmongering ante to a new level. Meanwhile, millions of people remain committed to working for peace, to end arms sales, and to cease brutal civilian deaths around the world. So now, more than ever, it’s those voices that need to take control.