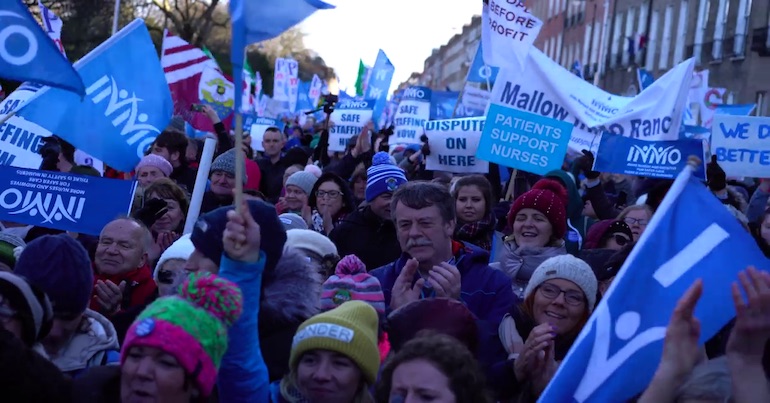 Over the weekend, thousands of people protested on the streets of Dublin in solidarity with striking nurses and midwives. The Irish Nurses & Midwives Organisation (INMO) organised the protest. Figures vary, but some sources have said as many as 45,000 people took to the streets on 9 February.

The INMO called the protest in order to pressure “the government to make serious proposals to resolve the industrial dispute”.

Nurses and midwives have been on strike for a number of days over the last two weeks. They are asking for an increase in pay and better working conditions. The INMO argues that there is a recruitment and retention crisis. In a statement released last month, the INMO said the government has “not been able to recruit and retain enough nurses and midwives on current wages”.

The number of staff nurses fell by 1,754 (6%) between 2008 and 2018, despite an ageing, growing population making the health service busier.

As the INMO noted in its press release, this is only the second time in the union’s 100-year history that it has called a strike.

Health minister Simon Harris has said the government is willing to come to an agreement with the nurses. But he has also said that any agreement must fall within the confines of the previously-agreed-to public sector pay agreement. He has furthermore stated that if he agrees to the pay increases for nurses and midwives, it will result in others also asking for pay increases. This, he says, is unaffordable.

Similar cuts to the NHS in the UK, which also targeted nurses, have been reported on in the past by The Canary.

Phíl Ní Sheaghdha, the general secretary of the INMO, told the protesters on Saturday 9 February that the campaign “has to succeed”. She called for “equal pay for nurses with other graduates”. And she stressed that the nurses and midwives “intend to get” it.

In closing, she assured those listening by saying:

We intend to make your case as strongly, as clearly, and without waiver, continue to argue that nurses and midwives deserve equal pay.

A candidate in the coming local elections in May called the protest a “knock out blow” to the government.

Knock out blow to Simon Harris and Leo Varadkar. Lets see RTE deny the 40-50,000 plus people who took the streets to say we want better for our Nurses, Midwives and patients alike! Open the purses, pay the Nurses! @INMO_IRL @PBPCork @pb4p pic.twitter.com/1BUCPiCuOM

The INMO has planned more actions for later this week. Across Ireland, nurses and midwives will strike for another three days. According to the Irish Times, the strikes have disrupted thousands of surgeries across the country. Nonetheless, the majority of Irish people support the nurses and midwives. A poll has found that 74% of the Irish public support the strikers.