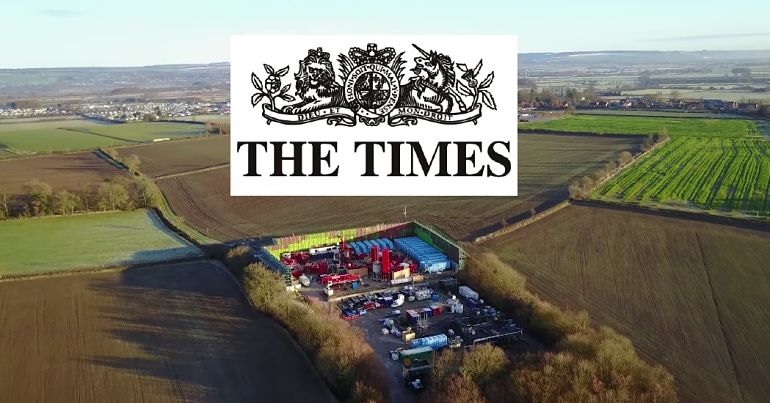 The Times published a letter from “almost 50 geoscientists” on 9 February. As the outlet explained in a further article, the scientists are calling for a relaxation of the rules on earthquake levels in fracking.

But actor Sam Haygarth wasn’t buying it. So he looked into the 50 people behind the call. Haygarth’s digging unearthed a startling discovery that puts the Times to shame.

As the Times explained in its article on the letter:

Almost 50 geoscientists have urged the government to commission an urgent review of the fracking earthquake limit, which they suggest should be raised to allow the industry to expand.

They say that the scientific rationale of the 0.5 magnitude limit before fracking must cease is debatable. They call for a “realistic regulatory framework”.

The outlet also noted that two fracking companies, Ineos and Cuadrilla, have recently called for the same.

That synchronicity isn’t surprising though. Because Haygarth claims that almost all the people who signed the letter appear to have links to the dirty energy industry itself:

THREAD: Decided to google the forty-eight “practising geoscientists” who signed this letter… https://t.co/sL09nhrhDV

Of the 48 people that signed the letter, I could not confidently identify 9. I think one works for BP and another works for Shell. Many are not experts in any recognisable way. But it doesn’t really matter. Because, of the remaining 39, all have links to gas and oil companies.

Haygarth also posted the notes he made while researching the people behind the letter. For example, he explained that one of the letter’s coordinators, professor Quentin Fisher, has attracted “considerable research income from industry”. Fisher also established an industry project that was “sponsored by Aurelian Oil and Gas, BG, BP, EBN, Shell and Wintershall”. Meanwhile, Fisher’s fellow letter coordinator professor Ernest Rutter is on the Task Force on Shale Gas. As Haygarth points out, this task force is funded by “Centrica, Cuadrilla, Total and The Weir Group”.

Nonetheless, nowhere in the Times article on the letter does it acknowledge such links. In fact, the geoscientists are more honest than the outlet. At least in the letter they admit to ‘supporting the development’ of fracking. The Times doesn’t even declare that in its article. As Haygarth says, it doesn’t say much for the UK media:

But it is worrying that, time and time again, our newspapers fall for these fairly obvious pieces of bought propaganda. Since being published in The Times, various other newspapers have picked it up, most notably The Independent.

It is indeed worrying that the media reports on biased interventions like this without the appropriate context. Because it holds a huge sway over the formation of public opinion. And only with the full facts can people make an educated choice on what position to take on different issues.

If the media doesn’t provide that, it’s failing the public it’s meant to serve.