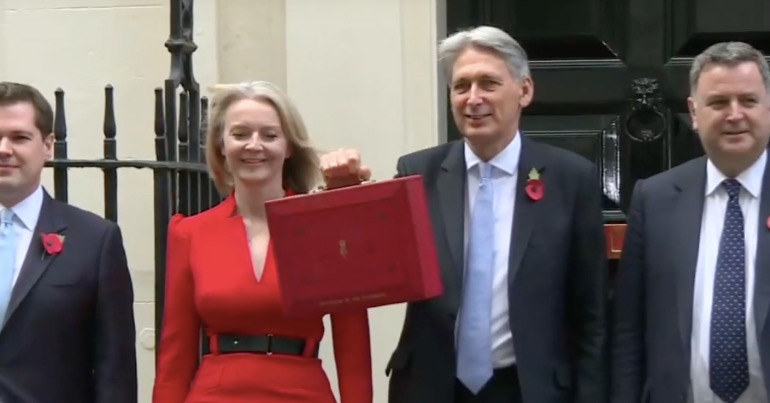 Remember when Philip Hammond stood up in front of the nation and claimed that the “era of austerity is finally coming to an end”? Well, it turns out that bold claim he made in his autumn budget speech is looking like complete bullshit.

As The Canary has previously reported, the idea that austerity was ever coming to an end is total and utter nonsense. And we were right. New figures show that the Chancellor looks to be £5bn a year short of delivering his promise of ending austerity.

The Institute for Fiscal Studies (IFS) has warned that spending promised in last year’s budget fails to protect local councils and cash-starved government departments from further cuts. It says that NHS spending commitments, defence spending, and international aid would swallow up funding increases.

It also states that maintaining current per capita levels of day-to-day government spending would require the Chancellor to spend an extra £5 billion a year by 2023-24:

The report states that the current spending “would not be enough to meet the cost of the Government’s existing spending commitments on the NHS, defence and overseas aid while avoiding cuts elsewhere”. And it says the cuts will affect other “unprotected” departments.

The evidence is mounting that, despite Theresa May’s rhetoric, austerity is not over. Unless Philip Hammond, at the very least, finds another £5bn at the spring statement, departments will be planning for yet more cuts next year.

Nine years of brutal Tory austerity have wounded our public services and the whole country which relies on them. The chancellor has promised a ‘Brexit bonus’ and any failure to deliver it at the spring statement will be yet more evidence of the Tories’ failure to negotiate a Brexit deal that benefits jobs and the economy.

It’s important to remember that austerity has been, and will always be, a political choice. As The Canary has previously reported, the UN condemned the “misery” of austerity and the subsequent poverty rates in a recent report, stating:

For almost one in every two children to be poor in twenty-first century Britain is not just a disgrace, but a social calamity and an economic disaster, all rolled into one.

Austerity’s death toll has hit over 120,000, with projections estimating that number to reach 200,000 by the end of 2020. This is shameful of one of the largest economies in the world. It’s clear the Conservatives’ economic plan has failed and more misery is on the horizon.

This country has had enough of the Conservatives’ economic incompetence. A new economic system is vital for the prosperity of current and future generations. This political choice of austerity must end. And only the electorate can make that happen.