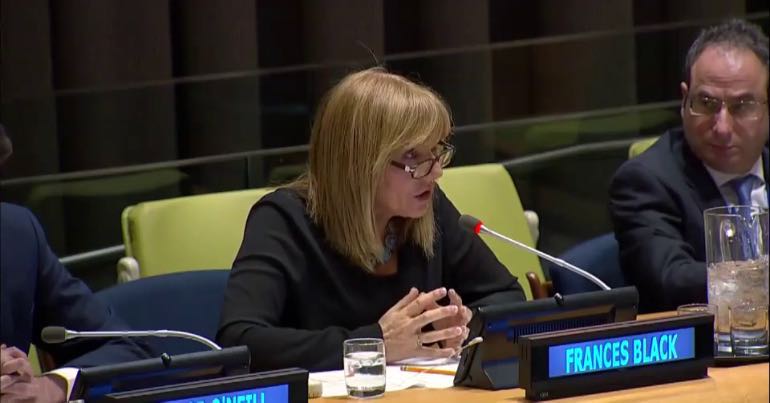 An Irish senator has told a UN Forum about her bill that would end trade with illegal Israeli settlements. Frances Black spoke in front of the UN Forum on the Question of Palestine on 4 April. According to its website, the UN Forum is “organised to raise awareness and highlight the need to address creeping annexation” of Palestine.

The Irish Senate passed Black’s Occupied Territories bill last year. And earlier this year, Irish members of parliament also voted in its favour. The bill still has to pass more stages before the government will sign it into law.

Even so, Black began by revealing the level of support she has received since she introduced her bill. As a result, she says:

we do believe that it will pass into law shortly before the summer.

And after explaining the details of what her bill does, she said:

It truly is groundbreaking legislation and it’s the first of its kind in the EU.

Black also insisted that she based her bill on international law. She argued that the settlements in the West Bank are “totally illegal”. What’s more, the international community knows they’re illegal. Black declared that:

The EU and the UN keep saying they’re illegal but the settlements continue to be built and nothing is done. It’s just not good enough”

And because of this, she asserted that there must be “consequences” for Israel.

But Black also pointed to the double standards of the international community. She said that governments call out the Israeli settlements as illegal. Yet, we still trade with them. She remarked:

There’s a clear hypocrisy here. How can we say they are illegal but pay to keep them going. Trade in settlement goods helps sustain injustice.

She also noted that when she visited Palestine, the people there would ask her about countries trading with the settlements. They asked her:

Why are the international community doing nothing to help us?.

As a result, she asserted:

We have to do something.

Black told the delegates gathered at the forum that “Ireland can lead on this issue”. Ireland, she said, has always supported human rights. It wants to do the same again with her bill. And now, she said she was asking “the international community to please come with us”.

She ended her speech by telling the delegates how:

In 1987 Ireland became the first country in the world to end trade in goods from apartheid South Africa.

Her bill, she argued, “could make history”. And as a result, she said:

this legislation can give hope back to the Palestinian people.

But Black’s work could all be for nothing. Because Israeli prime minister Benjamin Netanyahu has said that, if he is re-elected, he will officially annex West Bank settlements. He announced:

I am going to extend sovereignty and I don’t distinguish between settlement blocs and the isolated settlements.

The Israeli elections are due to take place on 9 April.

Black’s Occupied Territories bill is unlikely to become law. The Irish government has said it opposes it. It also has the ability to block its progress in the Irish parliament. And, as The Canary previously reported, the chair of the Jewish Agency for Israel has also written to the Irish government asking that it block the bill.

Black’s heart is in the right place. But it seems the Irish and Israeli governments will make sure that the Palestinians continue to suffer.