With unions and women leading the way, the revolution in Sudan is looking promising - Canary 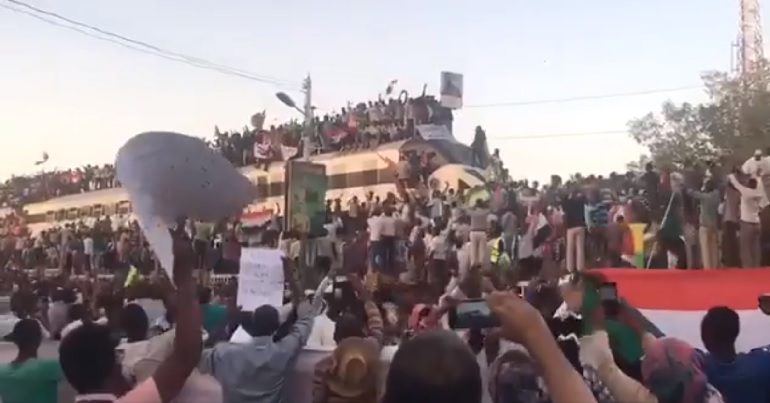 Mass protests in Sudan have forced dictator Omar al-Bashir – an alleged war criminal – to step aside. But the military is still in charge for the time being. So hundreds of thousands of protesters are still hitting the streets – led by women and trade unions.

Getting rid of al-Bashir

The Sudanese people lived under two decades of crippling US sanctions until October 2017 (when they ended amid increased government cooperation with Washington).  Al-Bashir, in power for almost three decades, is wanted by the International Criminal Court (ICC) for war crimes. He was the first serving head of state to face charges of genocide by the ICC. But he travelled the world freely, visiting numerous Western allies including Saudi Arabia, Qatar, and Egypt.

In 2018, al-Bashir began ‘economic reforms’ to try and please powerful groups like the notorious International Monetary Fund (IMF). He introduced austerity measures and cut subsidies. This got the IMF’s backing, but not the Sudanese people’s. And there was a surge of mass protests in December. In April, the military deposed al-Bashir and promised to oversee a transitional period.

As University of London professor Gilbert Achcar insists, though, the protesters “know that the military has been the backbone of al-Bashir’s rule”. So they won’t rest until the country has civilian rule.

Such incredibly inspiring footage from #Sudan, where protesters refuse to back down and continue to put pressure on the military to allow for a civilian transitional government #SudanProtests #SudanUprising https://t.co/iE9kn2HXDr

Unions and women central to the revolution

As political scientist Adrienne LeBas has pointed out, Sudan has a strong trade union tradition; even though al-Bashir systematically tried to shut it down. And it was unions that were key in organising the protests against al-Bashir. Women are also leading the revolt; seeking to ensure an end to the religious fundamentalism of the former regime.

The Financial Times recently gave a vivid insight into what’s going on now in Sudan. Leading the movement is “a new generation of idealists”; and it has “both a secular and a syndicalist tinge”. As one computer science teacher said:

The Sudan we all want is a Sudan of liberty, equality and justice, without a military government.

Keeping up the pressure

And as the Financial Times reported, “protesters understand how uprisings have been hijacked in neighbouring countries”. So they’re committed to avoiding the same situation in Sudan. In that spirit, they’ve told authoritarian neighbours like Saudi Arabia, the UAE, and Egypt to stay away.

The Financial Times also stated that tens of thousands of protesters continue to gather each day, “many of them doctors, teachers, trade unionists and professionals”. This is to keep pressure on the “transitional military council” to transfer power to civilians as quickly as possible.

There doesn’t yet appear to be a clear alternative government in waiting. But with unions and women leading the way, Sudan’s revolution certainly looks promising.