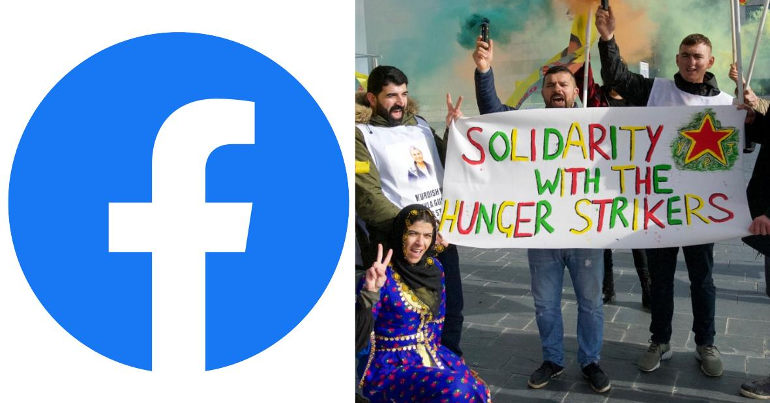 This is absurd and terrifying. Kurdish people and supporters and associated group pages are *genuinely* being banned from @facebook because they support Kurdish hunger strikers and request Turkey abide by international human rights laws. https://t.co/oHGIV5l74N

The Canary has been following the case of Kurdish hunger strikers closely in recent months. There are currently thousands of hunger strikers – and a number of ‘death strikers‘ – who are demanding an end to Turkey’s illegal isolation of imprisoned Kurdish leader Abdullah Öcalan.

Banned for supporting the hunger strikers?

Many other Kurdistan solidarity campaigners have reported to The Canary that they have been temporarily suspended, or that their posts have been removed without any explanation why. By apparently silencing these activists, Facebook is effectively shutting down campaigns. And it’s therefore helping to censor the internet.

Varlam Mahir is an activist from London Kurdistan Solidarity (LKS). The LKS page has been permanently removed. Mahir told The Canary:

This is the third ban since January, each time for something totally pointless – pictures from a demonstration, pictures of a hunger striker with a solidarity statement – really nothing. One time, I was banned for 30 days for sharing a photo of a hunger striker. Facebook apologised when I appealed, but somehow I still had a 30-day ban! But it’s no point taking it personally or looking for a logic: every political Kurd and Kurdish solidarity activist gets this. It’s only recently that far-right accounts have been taken down, but we’ve consistently been targeted, and 9 times out of 10 successfully.

we do not allow any organisations or individuals that are engaged in the following to have a presence on Facebook:

We also remove content that expresses support or praise for groups, leaders or individuals involved in these activities.

The Kurdish freedom movement is campaigning for better treatment for Abdullah Öcalan. And Facebook seemingly blocks posts about Öcalan, censoring groups and individuals that upload an image of him. Co-founder of the Kurdistan Workers’ Party (PKK), Öcalan has been imprisoned by Turkey for the last 20 years. Turkey has defined the PKK as a ‘terrorist group’. Most Western states have followed suit, as they see Turkey as a key trading partner and NATO ally. European courts, however, have insisted on numerous occasions that the PKK is simply a party to an ongoing conflict, not a terrorist organisation. The Turkish government, meanwhile, has been found guilty of war crimes against Kurdish communities.

Mark Campbell of the Kurdistan Solidarity Campaign told The Canary that:

Facebook has recently seemed to intensify its censorship of Kurdish activists around the world just at a time when many analysts have been hopeful of a potential breakthrough in the conflict between the Turkish state and the PKK in Turkey. On 2 May 2019, two of Abdullah Öcalan’s lawyers were granted access to their client on Imralı Island. This was the first time since 2011.

The Canary contacted Facebook, asking the corporation to explain why it has apparently been targeting activists en masse. Facebook replied, asking for the URLs of groups and users that had been blocked; but then didn’t respond any further.

It’s difficult not to think this is Facebook capitulating to the [ruling] AKP regime [in Turkey] and the Turkish state to avoid getting banned in Turkey.

Meanwhile, Facebook seems to have no intention of blocking fascistic Turkish president Recep Tayyip Erdoğan or his political party, the AKP. That’s despite them overseeing the biggest massacre of Turkey’s Kurdish population since the 1990s. Turkey also currently occupies the majority-Kurdish region of Afrin (in Rojava, northern Syria).