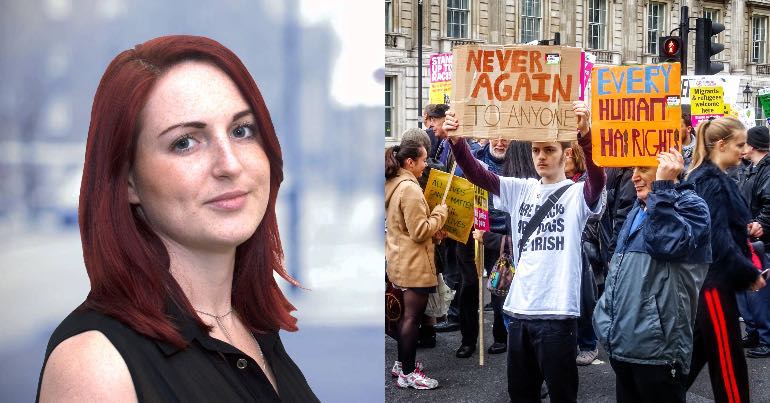 A candidate in the upcoming elections in Ireland revealed that far-right activists harassed her at a recent political event. Adrienne Wallace is a People Before Profit (PBP) candidate in the local and European elections later this month. Wallace said that, after a hustings in Limerick, two far-right men confronted her and tried to intimidate her.

In a video she uploaded to her Facebook page, she explained what happened after the event on 8 May.

Wallace said that members of the far right “emerged from under the rock to try and attack migrants”. But after the debate was over, she went on to reveal that two men confronted her. She related that:

After the meeting, two grown-ass men tried to get in my face, started cursing at me, shouting at me about the immigration stances we have.

Wallace answered some of their questions and told the men that she didn’t agree with them and said “it’s time to walk on”. She recounts that, in spite of this:

They kept trying to come in and get in my face and really just try and bully me.

In her video, Wallace also explains that this is a typical tactic of the far right. Even so, she argued:

To be quite frank, as a young woman in politics, the days of intimidating us are well and truly over.

Wallace stated that some of her fellow election candidates were using far-right language. This, she said, is “very worrying”. And she told The Canary that she felt the men were nonetheless careful not to “do damage to their movement if they cast their colours to the mast too early”. She is certain that this is the only reason they didn’t follow her to her car. But she insisted that:

I think it’s important to say that these people want a totalitarian state.

She also drew a link between the far right in Ireland and its actions elsewhere. She warned:

Remember that the far right have been linked to the murder of left-wing politicians in the UK, Charlottesville and some horrendous attacks on the Muslim community.

Given the rise of the far right in Europe and in Ireland, it’s important to remember what their goals are. Like Wallace argued, they long for a totalitarian state — a state in which they can eliminate minorities and crush dissent. And for this reason, we must not allow them to rise further and succeed. We must fight them wherever and whenever they appear.