Cornwall says no to rape-apologist, sexist fascists in the best possible way - The Canary 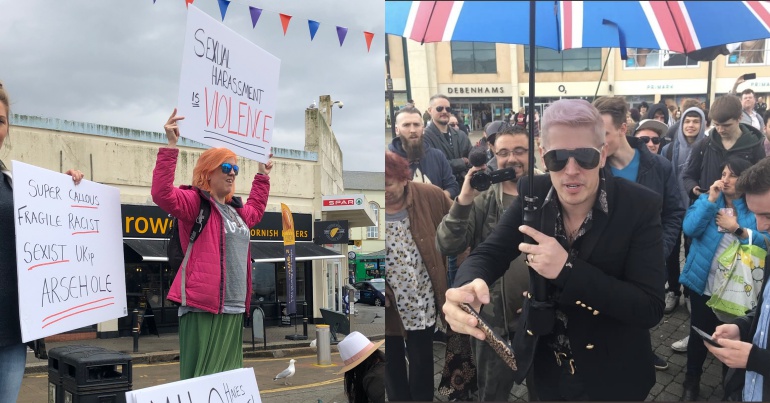 On 10 May, Cornwall delivered a powerful message to right-wing, sexist ‘campaigners’. Carl Benjamin, a UKIP MEP hopeful, and former Breitbart editor Milo Yiannopoulos visited Truro. But as they spoke to a handful of supporters in the rain, Cornwall sent a clear message. Their odious, vile views are not welcome.

Benjamin is currently under police investigation for repeatedly sending sexually violent messages to Labour MP Jess Phillips. Yiannopoulos’s views are so extreme he’s now banned from Facebook. In January, the Australian government cancelled his visa and accused him of spreading comments that “foment hatred and division” following the Christchurch massacre.

The Canary attended the event in Truro.

Some women, including Green Party councillor Amanda Pennington and artist Antonina, held banners that summed up why Benjamin and Yiannopoulos were not welcome:

Before Benjamin and Yiannopoulos even managed to speak, two protesters moved in to throw milkshakes. It was clear from the outset that the pair travel with heavy ‘security’. A group of thugs moved in fast and launched a vicious attack on one protester. One woman did manage to land a full milkshake on the right-wing supporters. Meanwhile, another woman stepped in to limit the severity of the violence. The Canary observed that both had visible injuries following the attack:

Rape Tweet Guy has just been milkshaked in Truro, then his security team piled in. Police now on scene. Peaceful protesters turned out in the rain too pic.twitter.com/ttztcCDKqK

For several hours, a local busker heroically played loud trumpet music to drown out the sound of hate speech:

So far this month we've learned that milkshakes, fish and jazz music are Antifa. https://t.co/MU9KtYm3ma

And later in the day, one protester threw fish at Benjamin:

So Carl Benjamin came to Truro today and this happened…#CarlBenjamin #Cornwall #UKIP pic.twitter.com/rBBVlW4qnb

Meanwhile, many people simply ignored Benjamin and Yiannopoulos. They certainly didn’t have many supporters:

Remember how no-platforming people like Milo doesn’t work?
He’s currently $2m in debt and being ignored by bored shoppers in Truro. pic.twitter.com/2BBtbgAfAF

At one point, Benjamin and Yiannopoulos attempted to intimidate the women peacefully holding banners and Antonina’s giant vagina painting. As Pennington noted, this is what they saw, “when the charming Yiannopoulos and his mob came to take us on”: 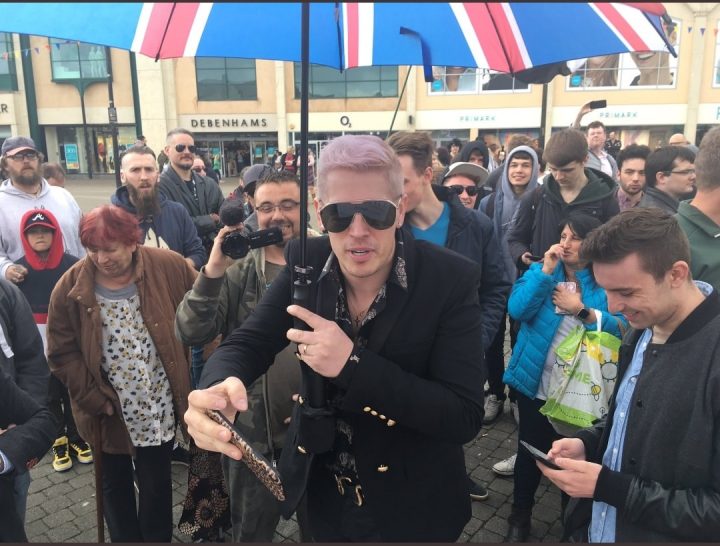 This scare tactic failed as the women faced them down:

#CarlBenjamin tried to intimidate the protesting women in #Truro by marching over towards them with the group of people. Failed. #clottedcreamrebellion pic.twitter.com/FRywLHYNC4

It’s disgusting that UKIP is giving this man a legitimate political platform. It was a tragi-comedy farce yesterday. Milo and Carl are just third rate comedians looking for an audience.

As the Guardian reported, following events in Truro “other Ukip MEP candidates have expressed fears that they could also be targeted with milkshakes while campaigning”. Protestors on two occasions have also successfully landed milkshake on Stephen Yaxley-Lennon (aka Tommy Robinson). So it’s the third time this tactic’s been used in just two weeks.

As Benjamin continues his South West tour he, and all his supporters, should take note. Their vile, sexist, fascist views are not welcome. And as people in Cornwall proved, no one’s scared of them.